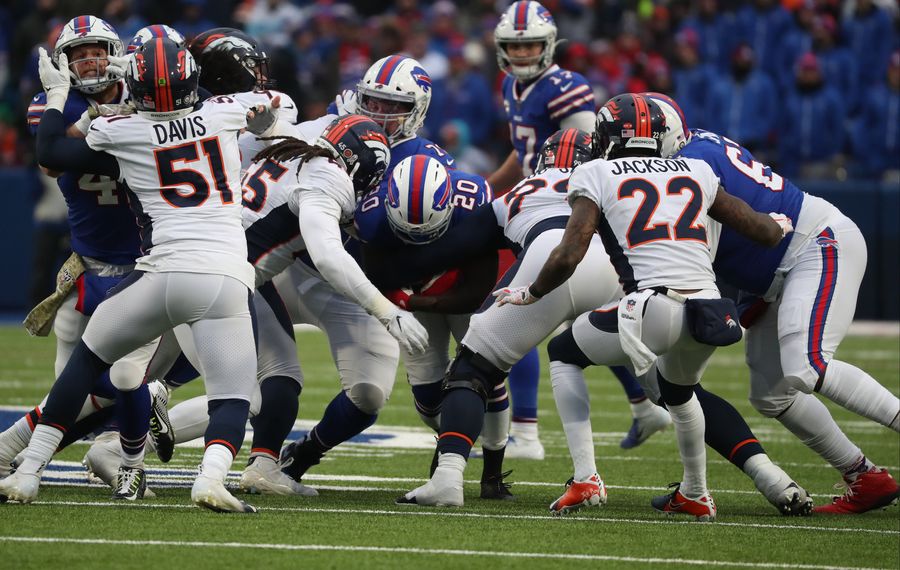 The left side of the Buffalo Bills’ offensive line was especially strong in the 20-3 victory over the Denver Broncos.

All the running helped the Bills negate Denver sackmaster Von Miller. Not counting the last two drives when the Bills killed the clock with 13 runs, Buffalo ran 20 times for 101 yards on first down and passed on only eight first downs.

The offensive line leads this week’s position-by-position grading of the Bills, based on video review and on a scale of 0 to 5:

Offensive line (4.5): Miller played 47 snaps off right tackle and 11 off left tackle. Rookie Cody Ford had to solo block Miller 10 times and gave up only one hurry. Eight other times Ford got help from a back, a tight end or guard Spencer Long. On a third-down conversion pass for 12 yards, Ford had perfect balance against Miller. Ditto for the TD pass to Cole Beasley. Ford allowed only one hurry. Dawkins allowed a sack to Miller (aided by a blitz) but yielded only one other hurry.

In the run game, Spain showed off his power. He blocked Reed on a 27-yard run by Frank Gore. He sealed off tough nose tackle Mike Purcell a couple times. He picked up blitzing A.J. Johnson on the TD pass to John Brown. He walled off Adam Gotsis on several clock-killing runs. It was an A-plus day for Spain. Props to Jon Feliciano for playing stout and glitch-free over the last 64 snaps at center in place of Mitch Morse.

Quarterback (3.5): Josh Allen continues to show progress in the pocket. On the TD pass to Beasley, he looked first for Dawson Knox, shifted to the slot receiver, stood in a tightening pocket and took a hit on the throw. A 30-yard pass hit Beasley in perfect stride. Maybe the 34-yard beauty to Brown will boost his deep-ball confidence. He got fooled by Vic Fangio’s post-snap shifting just once, on the interception.

Allen explained: “I thought they were in quarters and their safety was committing to the run. That’s our cue to kind of put it over the top, and my eyes were on him. I didn’t see the backside safety moving post high. They disguised it well, they made a play. And obviously it’s one that I want back.”

Running back (4.5): Gore’s between-the-tackles toughness seems to be rubbing off on Devin Singletary. He had two brilliant 10-yard runs. On one, he slipped Kareem Jackson at the line and stiff-armed Chris Harris for 6 extra yards. On another, his leg-churn carried Johnson, the 245-pound linebacker, an extra 6 yards. He also picked up Johnson’s blitz on the Beasley TD.

Receivers (3.0): With Harris covering Brown, Beasley made key catches against Denver’s second and third corners. Meanwhile, Knox had a good day blocking. Knox played 63 snaps and Tyler Kroft 25. No reason for that ratio to change.

Defensive line (4.5): Shaq Lawson was unblocked on both of his sacks thanks in part to zone pressures dialed up by Leslie Frazier. Nevertheless, Lawson’s quickness off the snap was a factor in exploiting rookie guard Dalton Risner. Lawson also pressures bootlegs well from the weak side. That caused an incompletion. All the Bills’ defensive linemen made positive run-force plays. Ed Oliver used a power arm-bar to push Risner back for a sack. Jerry Hughes had a solid game against left tackle Garrett Bolles, who now has committed 43 penalties (including 31 holds) in the past three years.

Linebackers (4.5): Matt Milano had another hell-on-wheels performance, with six tackles, a bat-down, a QB hit and superb coverage. Denver tight end Noah Fant is dangerous after the catch on short passes, but Milano swarmed him with closing speed. We marked him down for 15 positive plays. He rushed the passer six times. Tremaine Edmunds was sound in run fits. Lorenzo Alexander saw 15 snaps as a linebacker in the 4-3 front and another 10 as a rush man. Alexander made two special-teams penalties.

Defensive backs (4.5): Tre’Davious White put another notch in his Pro Bowl resume by holding Courtland Sutton to one catch on eight targets, albeit with some help over the top. White was good in press coverage. A good jam on Sutton helped create the interception near the end of the half. White had a breakup of a slant pass and nearly picked off an imprecise out-route pass for Sutton late in the game. Taron Johnson continued to show tough tackling. He set the edge on a wide run, defeated a block to stop a receiver screen for no gain and crashed the line for another no-gain run in the fourth quarter. Jordan Poyer was outstanding in run-force situations, as usual. Levi Wallace sniffed out a tight end screen for a 5-yard loss. Wallace also was a spy on Brandon Allen on a third-and-3 incompletion.

Special teams (4.0): Andre Roberts was a huge asset. He made catching punts in gusty wind conditions look easy. He had a kickoff return of 25 yards to the 41, aided by good blocks from Julian Stanford and Knox and a Roberts stiff arm that gained him 11 extra yards. He had good punt returns of 17, 8 and 12 yards in the second half. All four of Corey Bojorquez’s punts went inside the 20.