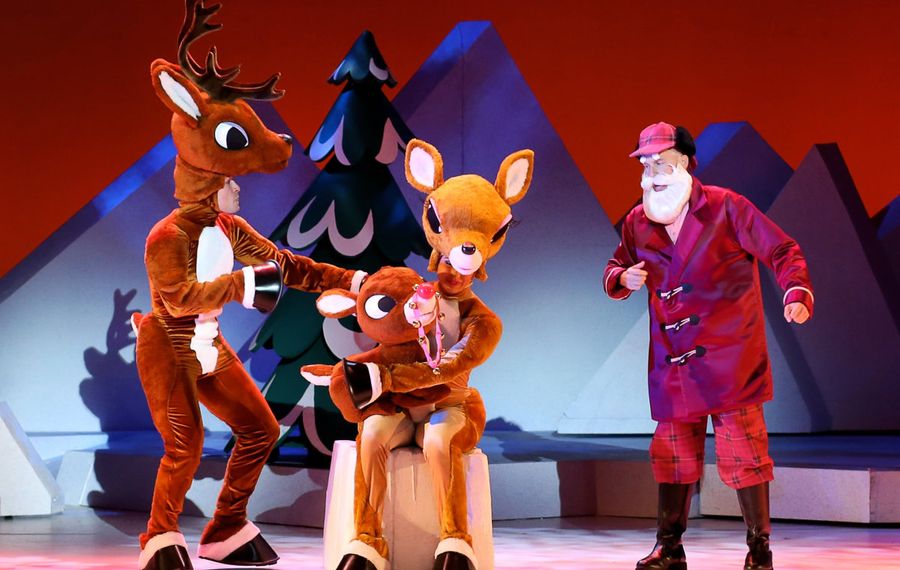 Not all the magic of the holidays is wrapped up in packages under a tree. Much of the wonder of the season is out in the open, in special community events and performances that add warmth to the winter and bring light to our lives. Here we present some of those celebrations made for families to share with their youngest members.

As soon as MusicalFare Theatre announced that "Elf" would be its holiday show this season, it was clear that Buddy, the human raised by Santa's elves, would have to be played by Chris Handley. And, if reviews and ticket sales are to be believed, Handley and the rest of the cast are making the magic happen in the theater on the Daemen College campus (4380 Main St., Amherst). A treat for older kids and adults, the show continues through Dec. 22. Tickets are $47 at musicalfare.com, with limited availability for some performances and a few shows already sold out.

The Lancaster Opera House is going all out with two holiday shows this year, both variations on familiar stories. The first is "Miracle on 34th Street: A Live Musical Play," which has been adapted from a 1947 radio broadcast that was adapted from the original movie starring Maureen O'Hara and Edmund Gwenn as Kris Kringle, a Santa Claus at Macy's who just might be the real thing. The show continues through Dec. 8. Tickets are $32 general, $30 for seniors and $20 for students; lancasteropera.org. 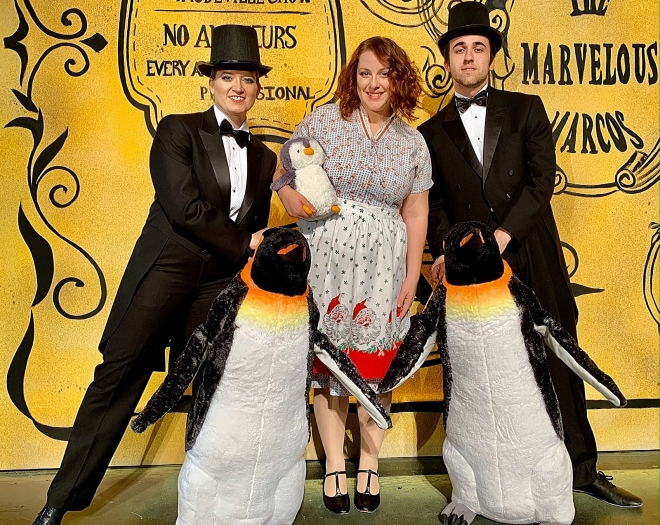 Very young children, let's say 10 or younger, are the target audience for Theatre of Youth's holiday musical "Mr. Popper's Penguins," which promises plenty of puppetry to support its preposterous premise of one couple's unplanned but pleasant plague of penguins. Unlike the not-so-magical movie of the same name, which departed mightily from its source material, this hourlong production has all its webbed feet firmly planted in the 1938 children's classic written by Richard and Florence Atwater. Performances are Saturdays and Sundays, Dec. 7 through 22, in the Allendale Theatre (203 Allen St.). Each show includes a post-performance chance to meet the cast and take photos. Tickets start at $15; theatreofyouth.org.

"A Christmas Carol" is a holiday tradition at Alleyway Theatre, which is presenting Neal Radice's adaptation of the much-loved Dickens classic from Dec. 6 to 22. If the weather cooperates, families could enjoy free skating a block away at Rotary Rink on Main Street before joining Scrooge, Tiny Tim and all the ghosts for a magical evening at One Curtain Up Alley, just north of Shea's off Main Street. Tickets are $40 general, $20 for students; alleyway.com.

Two other locally produced shows in the Theatre District also hold appeal for older kids and adults. Buffalo-born playwright Tom Dudzick's comic "Christmas Over the Tavern" sold out at MusicalFare last season, so the Pazinskis have moved their family tavern to roomier quarters at Shea's 710 Theatre for a three-week run, from Dec. 5 to 22. Tickets are $44 general and $18.50 for students; sheas.org. 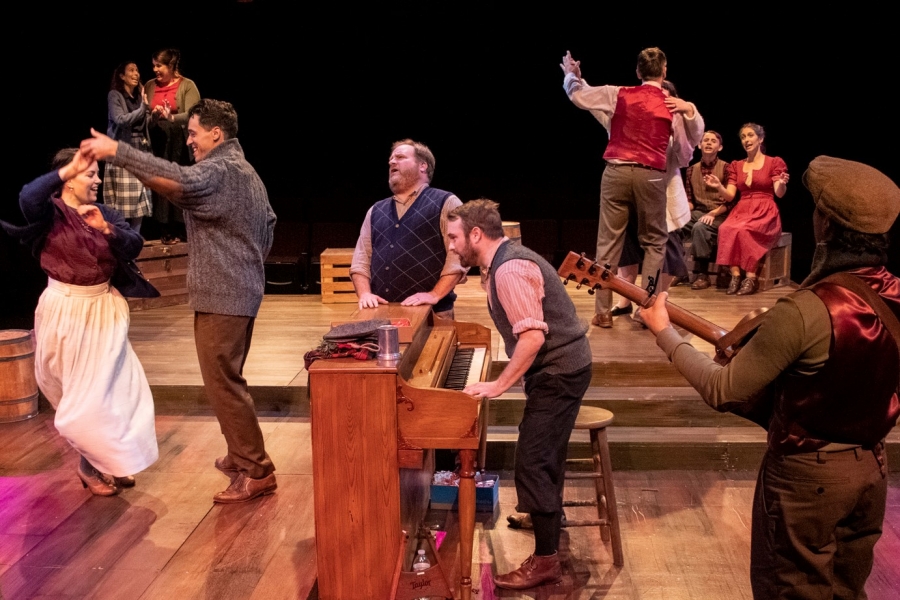 The perennial family favorite "A Child's Christmas in Wales" is presented by Irish Classical Theatre. (Photo by Gene Witkowski)

Across the block in the Andrews Theatre (625 Main St.), Irish Classical Theatre Company is presenting another charming down-to-earth celebration with "A Child's Christmas in Wales," adapted from Dylan Thomas' recollections of his own childhood, a time of joy, although, Thomas wrote, "I can never remember whether it snowed for six days and six nights when I was twelve, or for twelve days and twelve nights when I was six." The show, full of holiday music and stories, is suggested for ages 8 and older. It continues through Dec. 15. Tickets are $49 general, $20 for students, with $25 rush tickets available 20 minutes before showtimes; irishclassical.com.

There also are three holiday touring productions stopping in the area.

The Riviera Theatre (67 Webster St., North Tonawanda), welcomes "A Charlie Brown Christmas" at 7 p.m. Dec. 3. The live version of the television special includes a concert of holiday songs. Tickets are $39.50 to $49.50; rivieratheatre.org.

"The Elf on the Shelf" Christmas musical is inspired by the Scout Elf toy that checks on who's naughty and nice for Santa. Magic City Productions brings the show to the University at Buffalo Center for the Arts at 7 p.m. Dec. 15. Tickets start at $29.50; ticketfly.com.

The musical "Rudolph the Red-Nosed Reindeer," based on the 1960s stop-action TV special, will have five performances from Dec. 20 to 22 in Shea's Buffalo Theatre. The musical expands on the story of Rudolph's adventures with Hermey the Elf, Yukon Cornelius and the Island of Lost Toys and uses special effects and puppetry to bring the show to the stage. Tickets start at $27; sheas.org.

The Aurora Theatre hosts its annual "Hollywood Holidays" series with fun family films, visits with Santa (Saturdays through Dec. 21) and a new display of props featured in "Dr. Seuss's How the Grinch Stole Christmas." It opens with three days of movies: the 2018 animated version of "The Grinch" at 11 a.m. Nov. 29, "Elf" at 11 a.m. Nov. 30 and "White Christmas" at 11 a.m. Dec. 1. Special Grinch Day is Dec. 7. Find the full schedule at theauroratheatre.com. 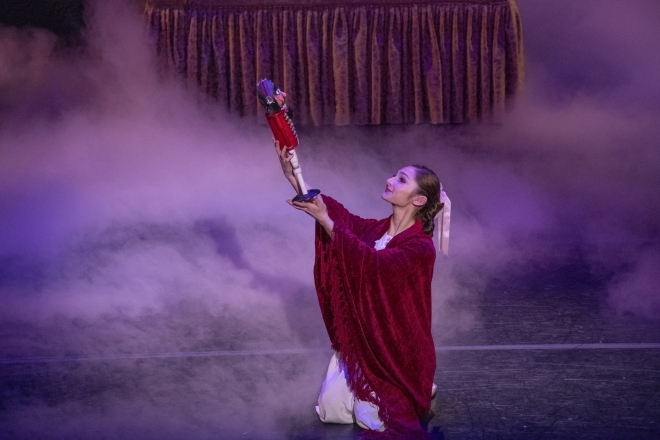 The annual performance of Neglia Ballet's "The Nutcracker" returns to Shea's Buffalo Theatre. (Photo by Gene Witkowski for Neglia Ballet)

Shea's also will host the Neglia Ballet's presentation of "The Nutcracker," with performances at 7 p.m. Nov. 30 and 2 p.m. Dec. 1. The Buffalo Philharmonic Orchestra will be accompanying the dancers with Tchaikovsky's "Waltz of the Flowers," "Dance of the Sugar Plum Fairy" and the rest. Tickets are $26 to $57; sheas.org.

With "The Nutcracker," the BPO is just getting started on its packed holiday performance schedule, which contains many concerts designed to please young listeners. Watch little Kevin outwit two bumbling burglars in the holiday movie "Home Alone" as conductor Ron Spigelman leads the BPO in a live performance of John Williams' score. Performances are 7 p.m. Dec. 11 and 12 in Kleinhans. Tickets start at $39; bpo.org or 885-5000. 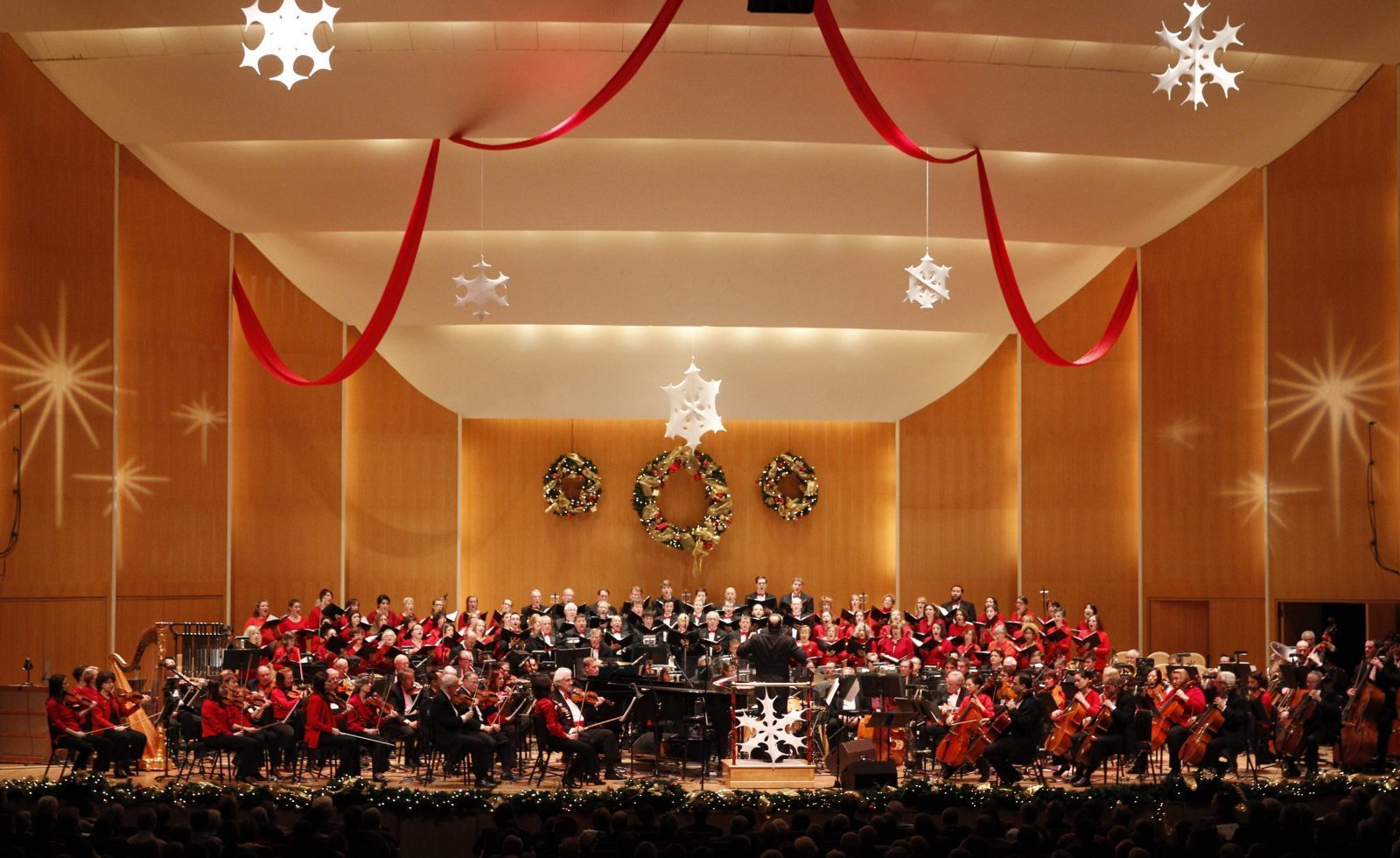 A shorter program of holiday music will be offered at 2:30 p.m. Dec. 15, when the BPO Kids Series presents "Jingle Bell Jam." Along with the BPO regulars, a special guest in a red suit and white beard will help lead the orchestra and a singalong. Dancers from the Royal Academy of Ballet will join in, along with members of the Buffalo Academy of Visual and Performing Arts Vocal Symphony. Preconcert activities start at 1:30 p.m., and kids can meet Santa at a postconcert milk-and-cookies reception. Tickets for the full afternoon are $24; bpo.org.

John Morris Russell, aka "Mr. Christmas," conducts the BPO's annual Holiday Pops at 10:30 a.m. Dec. 19 and 20, 8 p.m. Dec. 21 and 2:30 p.m. Dec. 22. Award-winning singer Liz Callaway and the Buffalo Philharmonic Chorus will be adding their voices to the mix, which will include "Sleigh Ride," singalongs and performers from the African American Cultural Center joining in "The Little Drummer Boy." Tickets start at $39 for adults with half-price tickets for children and students with ID; bpo.org, or 885-5000. 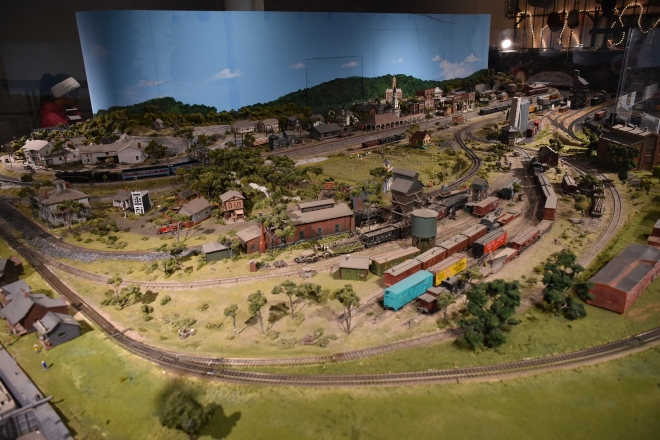 Even though the weather suggests it's time for sleds and skates, trains have a unique place in many people's Christmas traditions. The Buffalo History Museum hosts its annual holiday Train Day from noon to 4 p.m. Nov. 29, with a model train set portraying 19th century Buffalo plus live music, crafts and games. Museum admission applies.

Slightly farther north, the Polar Express begins running from Medina to the North Pole, or thereabouts, on Nov. 30, continuing on weekends through Dec. 15. Passengers are asked to arrive an hour before boarding to park at 698 Gwinn St., Medina, and pick up their tickets. Rides are $36 to $51 at medinarailroad.com, and include hot cocoa, cookies, scenes from the movie, music and a visit from Santa.

In the Southtowns, Santa Claus arrives by train in the Village of Hamburg at 9:30 a.m. Nov. 30. Kids and their families are invited to meet the jolly elf at the historic Erie Railroad Depot on Scott and Union streets, where they can take pictures and, for $20 a ticket, ride the Santa Express on a 7-mile journey to Eden Valley and back. The Santa Express will continue running Saturdays and Sundays through Dec. 15, with trip times at 11 a.m. and 1 and 3 p.m. Find tickets online at BCJRailroad.com or at Artcraft Toy Trains in the deport.

The Hamburg Holiday Parade starts at 11 a.m. Nov. 30, traveling from Center Street to east on Main and then north on Buffalo Street to Pleasant Avenue. 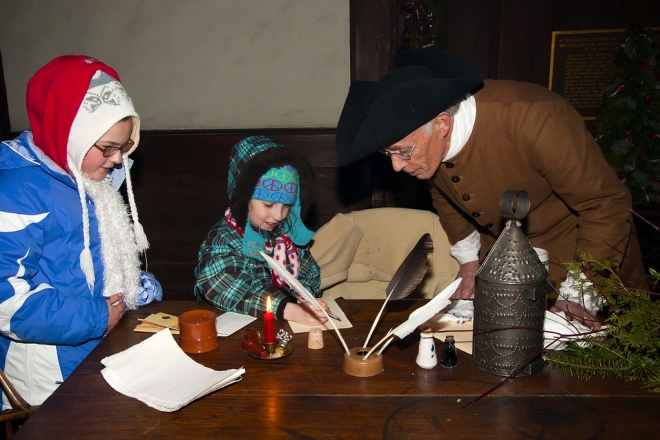 During "Christmas by Candlelight" at Old Fort Niagara, there will be a number of hands-on activities in the Johnson Room, including writing with quill pens and playing period games with soldiers. (Photo by Wayne Peters)

Kids can step back in time at Old Fort Niagara's Castle by Candlelight fundraiser Dec. 7 and 14, when the French castle is decorated with greens and celebrating an 18th century Christmas. Tickets are $15 online at oldfortniagara.org and $25 at the door.

The 15th annual Fairgrounds Festival of Lights opens Nov. 29 at the Erie County Fairgrounds in Hamburg, running weekends through Dec. 15 and then expanding to weeknights Dec. 18 through 23. Lights are from 5 to 9 p.m.; buildings are open to 10 p.m. Tickets are $25 per carload.

Other opportunities for holiday cheer include the Lancaster Christmas Fire Truck Parade on Nov. 30, which brings more than 200 decorated emergency vehicles to the village for a spectacular motorcade from Lancaster High School south on Central Avenue to Broadway, beginning at 6 p.m.

Spectators do most of the walking in the Hertel Holiday Walk and Tree Lighting on Dec. 6, when Santa and Mrs. Claus will parade a few short blocks from Parkside to St. Margaret Church for the tree lighting on the lawn at 6:30 p.m. while shopkeepers welcome visitors with holiday treats and deals.