The way the French eat salad after the entrée so does Torn Space work in its own order.

The experimental, avant-garde, what-am-I-watching theater company has made a name for itself in this way. Just go with it, they insist with gracious invite. Whether at home in the utilitarian Adam Mickiewicz Dramatic Circle, tucked away behind a cozy Polish speakeasy, or wandering the rusty romance of the Silo City frontier, they aim to shock you into awe. Forget France; they travel the galaxies.

But its latest venture, the year-in-the-making “Manmade Earth,” in collaboration with renowned experimental theater group 600 Highwaymen, goes beyond even that – with simplicity, humility and invigorating commentary. Whereas Torn Space directors Dan Shanahan and Melissa Meola are wont to layer their productions in atmospheric stimuli – fire, live horses, full-course meals – 600 Highwaymen directors Abigail Browde and Michael Silverstone dwell in the volume of the void, the starkness of our words.

On stage, eight young actors – local high school and college students from predominantly foreign backgrounds – pose questions to the audience about their appearance and identity. They are being rhetorical, but nevertheless they put us on the spot. One by one, they traverse the long floor flanked by our seats; a runway for model thinking. If it feels interrogative, that’s on you. This is about your projections on them, about the permission you might instinctively give them based on your notion of who they are. This is our narrative as onlookers.

What follows is a riveting dive into the immediate and intimate relationships that they form with questions and declarations. They weave among and between the audience and the actors, a full constellation of connections. Without flash or shtick the cast creates a pressure-sealed lock on the room, where outside influence, prejudice, judgment and doubt struggle for air. It is amazing to feel the grace in listening, the power in eye-contact. 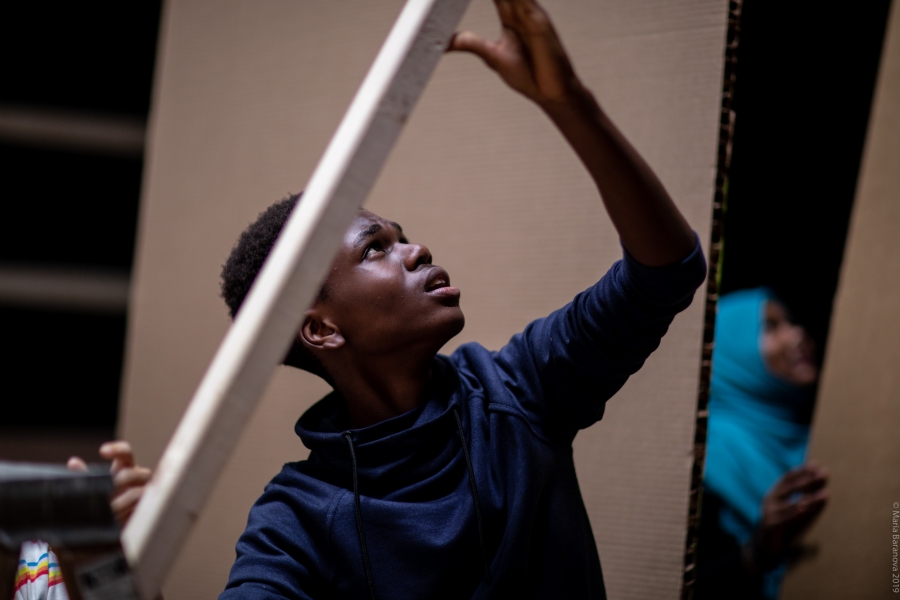 Students build a house on stage as a powerful metaphor in "Manmade Earth" by 600 Highwaymen, co-produced by Torn Space Theater. (Photo by Maria Baranova)

I’m not going to tell you much more about what happens, or even convince you I know what all of it was. That’s barely the point. It’s about your commitment to being there, about showing up and staying. It requires almost no physical participation, yet feels full-bodied. Which is to say, my face was in my hands (and so were the faces of those audience members looking back at me).

These performers are more or less untrained as actors and yet they lead with the agency of rogue performance artists. Their delivery is eloquent, not despite but perhaps because they’re speaking in a second language. The way that small children see the world without prejudice, these young adults speak without pretense. They are elegant and raw in the same breath.

They do more than ask questions, though. They actually build a house together on stage, without talking. And so do you, whether you realize it or not. If this isn’t an extraordinary metaphor for the promise of theater, then I don’t know what I’m doing here. 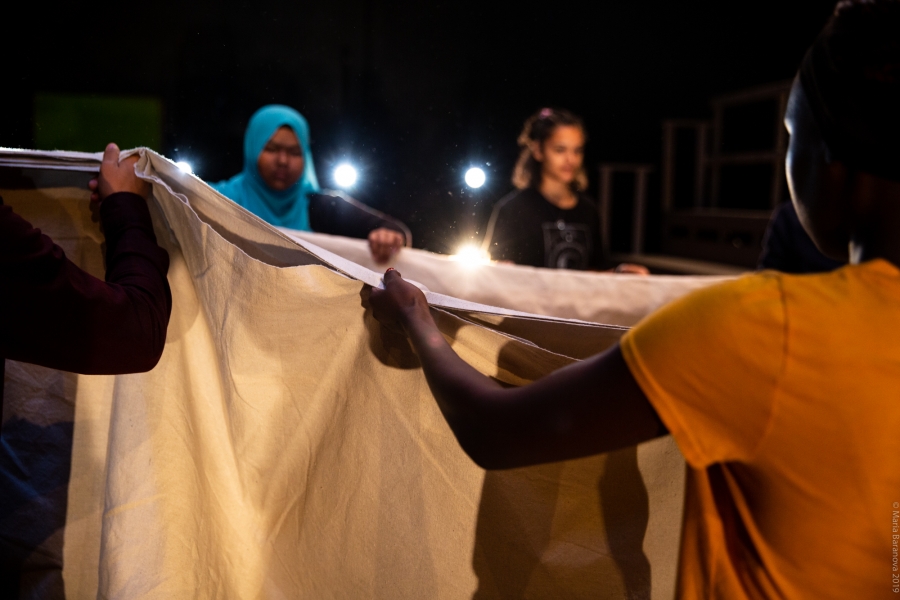 Students work in unison throughout "Manmade Earth" by 800 Highwaymen. (Photo by Maria Baranova)

Browde and Silverstone spent time over the last year with these performers to devise the story they wanted to tell. Many of them attend Lafayette International High School; most of them were born in another country; their literal journeys to this country, our city, their school, and this theater are central to this experience.

They are Nur Aisyah, Nasra Ali, Raiza Almonte, Dimyana Angelo, Amanda Barsi, Augustin Bonane, Jeanvier Nkurunziza and Shujaa Altorjman – and they are beautiful. Take time to savor their note in the program, delivered at the end of the performance. It is something else.

Beyond all of their tropes, what implicates us as an (almost) passive audience is our ability to connect with these actors by merely being among them. This project is an exercise in civics, make no mistake, but it is also a dear love letter to theater. That in this room, for this hour, we get to float in space together as one. What a thrill.

Do not miss this ticket. Bravo all around.