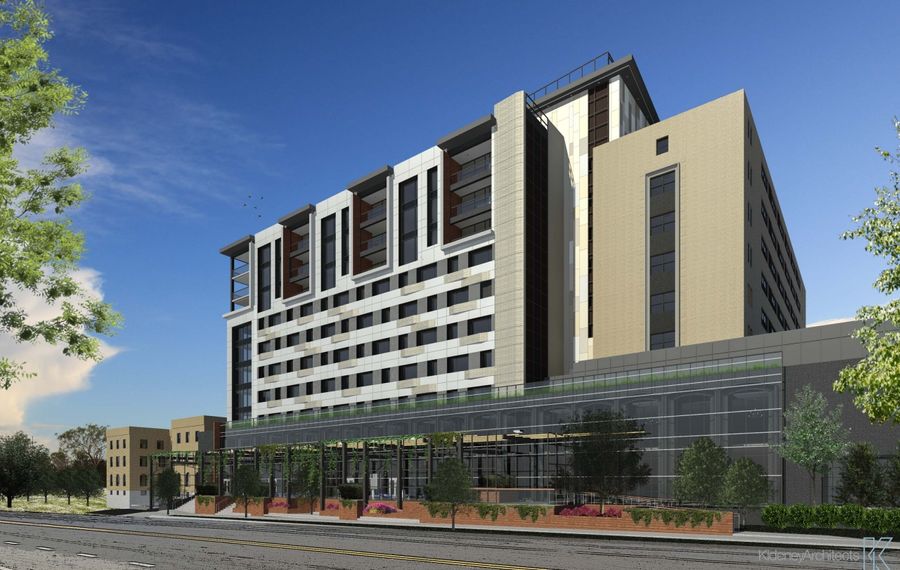 As developers Nick Sinatra and William Paladino work to build support for their plan to convert the former Women & Children's Hospital of Buffalo campus into Elmwood Crossing, neighborhood opposition is slowly building against their effort to create a single set of zoning rules for the entire property to make the project easier and simpler.

An online petition to "preserve & restore our neighborhood" is now circulating in the Elmwood Village, urging the city to reject the request by the developers to designate the campus project as a "planned-unit development" or PUD. That request, which was the subject of a Nov. 6 public hearing, is pending before the Common Council.

A PUD refers to a type of development project and the regulations that govern what can be built. It's intended as a deliberate grouping of various land uses within one overall project or subdivision, regardless of pre-existing zoning rules. It specifies exactly what a developer can and cannot do, and has been used in other situations in Buffalo to unify a complex plan and simplify the process.

However, city officials have noted that each individual project within the PUD area must still come back to the Planning Board for normal site plan review, which still provides opportunities for anyone to oppose a project or push for changes. Other approvals may also be required as normal.

Sinatra & Company Real Estate and Paladino's Ellicott Development Co. have proposed converting the 8-acre campus into a mixture of residential, retail and office space that would maintain and reuse the majority of the old hospital buildings. Current plans call for 220 apartments, 27 condominiums, 22 for-sale townhouses, a 75-room boutique hotel, an urban grocery, boutique shops, offices and an EduKids day care center – all spread over multiple locations on three different streets.

Opponents want to deny what they call the "special zoning" of a PUD, because they say the developers "should not be allowed to circumvent the standard requirements of the Unified Development Plan" or Green Code, according to the petition. They want to "protect the scale and character of our neighborhood," the petition says.

"We, the undersigned, are concerned citizens who urge our leaders to act now to see that PUD is denied," says the petition, which has 101 online signatures and 17 comments as of Monday, plus several dozen more on the printed copy that is also circulating.

"I have grown up in this neighborhood, and I would absolutely hate to see it destroyed all because developers just want more money," wrote Sophia Watson, one of the signers. "Try taking into account people’s preexisting lives and emotions please." 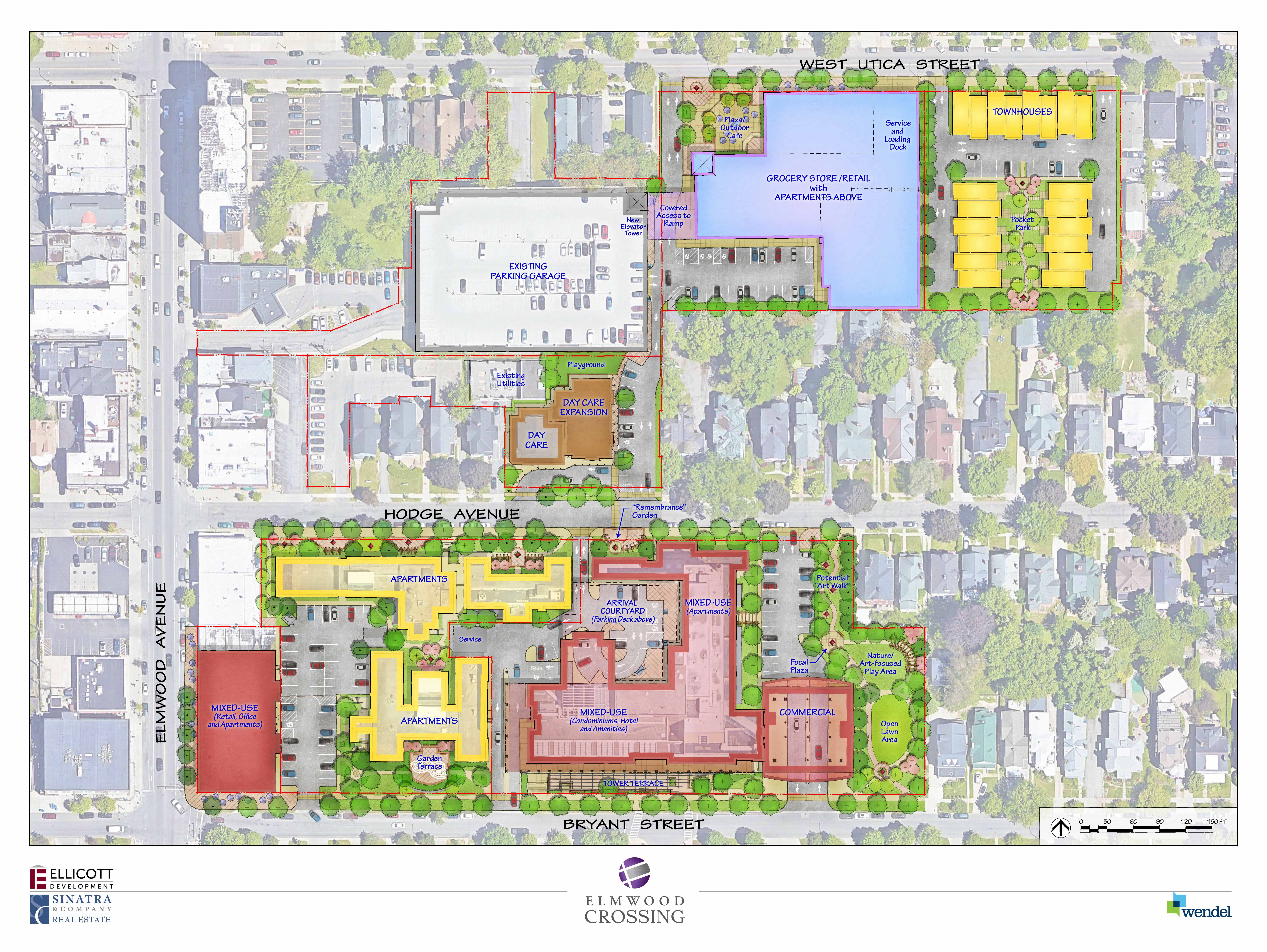 The master plan for Elmwood Crossing.

The petition continues by citing a series of other priorities that supporters demand, including:

The development team posted a response on Facebook on Friday, noting that it has been working on the plan with community members for two years, and calling it "disappointing that at such a late hour, a small group is attempting to halt the process of obtaining a Planned Unit Development that has long been publicized and discussed."

"Over the course of a site’s redevelopment, especially on a project of this magnitude, satisfying the wishes of all is an impossible task," the developers noted. "This plan has been publicly available for over year, undergone a rigorous environmental review and has benefited from a group of community volunteers who have collaborated and dedicated years to the project by way of providing advice, sharing information and expressing a varied and diverse set of opinions."

Sinatra and Ellicott, in their response to the petition, noted that:

"The development team has worked closely with a group of community advisors and been accessible and transparent in unprecedented ways," the developers concluded. "Our community has at its doorstep a good plan. Let’s move it forward together."

However, not everyone opposes the PUD. In a separate Nov. 6 letter to the Common Council, the presidents of the Bryant-Oakland-Summer Association and the Atlantic-West Utica Block Club – along with eight residents or property owners – backed the PUD and 13 of the 16 variances that the developers have requested.

"We write today to register our support for the project, and to offer feedback on the Planned Unit Development," they wrote. "We believe that the development team has made efforts to solicit and respond to public input ... and that the vision put forward in the PUD is consistent with the plans we have seen over the last few years."

But they still cited concerns and objections about certain specific issues, such as a need for any four-story buildings to include "step-backs" from the facades to reduce the visual impact on the street.

Like the petition writers, they also opposed the demolition of two houses at 180 and 184 West Utica, which they say are "important contributing properties to the Elmwood Historic District-East," according to their letter. Those houses are among the properties on which new for-sale townhouses would be built – an overall element of the plan which the two block clubs said they support.

"West Utica will see the most change of any street impacted by the redevelopment, and amid that evolution, it's important that the existing character of the neighborhood be preserved," they wrote. "We have asked the development team to come up with an alternative layout for the townhouses that would keep the existing homes intact."

However, they support the developers' plan to demolish another home at 187 Bryant, which would be converted into a park, and urge that the PUD include a permanent zoning restriction to ensure it stays that way.

Indeed, the issue of green space and preservation is particularly sensitive to many. The developers incorporated pocket parks and play areas, adding new pedestrian and bicycle paths, playgrounds, pergolas, lawns and trees to the mix. But that hasn't been sufficient to dull the criticism.

The letter from the two block club presidents – Carly Battin of Bryant-Oakland-Summer and Robert Pedersen of West Utica – criticized the developers for including as "green space" any area on the campus not covered by a building or parking. And they urged that the city work with the developers to at least double the actual proposed green space, with the city owning that land to ensure it remains publicly accessible.

The petition and letter illustrate the challenge that the developers will face in winning over the Elmwood Village to support their $100 million remake of the former 600,000-square-foot hospital complex.

Specifically, the condos, a fitness center, hotel and ground-floor retail will be in the 10-story Variety Tower. The Tanner Tower will have ground-level retail space and 49 apartments on the next eight floors. The three floors of the Alfiero Building will be all offices. And the Annex, D and MH buildings will have about 100 apartments – including affordable housing that would be developed in conjunction with People Inc.

The former Hodge Pharmacy is being converted to the EduKids day care. On West Utica, Essex Homes of Western New York is working with CJS to construct three-story townhomes, while the new West Utica Lofts building will include a grocery and a few other retail stores on the ground floor, plus 48 apartments on the upper levels.

Designed by Kideney Architects, the project would entail only limited demolition – including two houses on West Utica. A 34,400-square-foot portion of the tower complex also will be demolished to make room for a courtyard accessible from Hodge Avenue and Bryant Street.

However, most of the hospital buildings – including the Variety and Tanner towers and the Alfiero Building – would be kept and renovated, while two would be expanded. Tanner, along with three buildings known as the Annex, MH and D buildings, will be renovated with historic tax credits, while Variety and Alfiero will get new facades. And the developers are seeking to buy the now-vacant parking ramp from the city, to be reopened.

The first new building – a five-story retail and apartment building at the corner of Elmwood and Bryant avenues – has already been approved, and is underway. The city has already accepted a final environmental review statement covering the entire site. So approval of the PUD is the next step in a project that is expected to last through 2022.