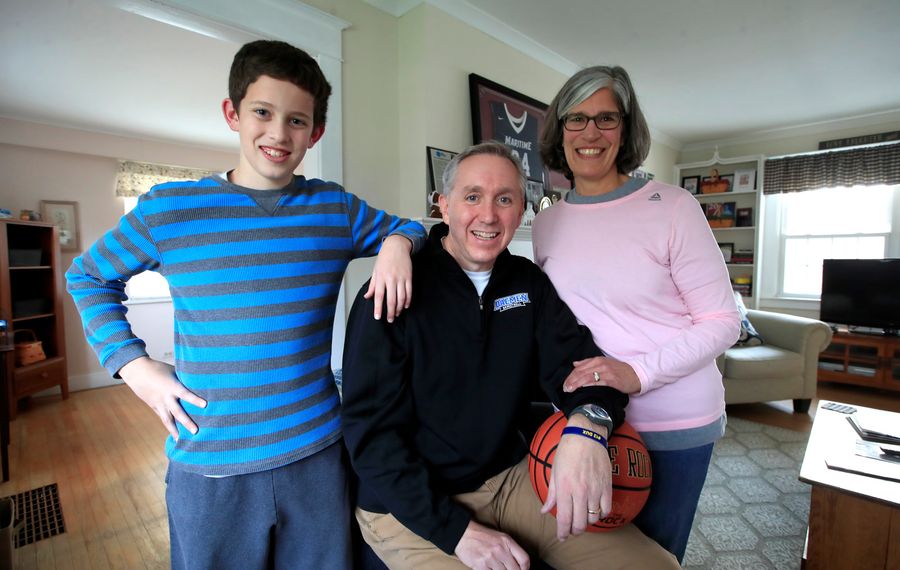 Mike MacDonald’s commute to work has shortened in the last 15 years. When he and his wife, Maura moved into their current home in Amherst, he was a half-mile from the campus of Daemen College.

For 26 seasons, he drove into Buffalo to work, first as an assistant men's basketball coach at Canisius for nine seasons, then as its head coach for another nine seasons. Then, he spent eight seasons coaching at Medaille. Now, he's in his sixth season as head coach at Daemen.

Some days, whether it’s in the early or late hours, MacDonald walks from his home on High Park Boulevard to his office, tucked inside Lumsden Gymnasium and decorated with wedding photos, family photos and baby photos from his former players.

MacDonald uses those walks to work to talk on the phone.

“I’ll take some of the back roads, where it’ll be a little quieter, and I take a longer route, just to be able to make those phone calls and catch up with things,” MacDonald said. “It’s a good way to unwind after work, too.”

It’s a modest means of transportation for someone who is a mainstay in college basketball in Buffalo.

Daemen will play its first game at KeyBank Center on Saturday, and MacDonald will coach college basketball as a head coach in a downtown arena for the first time since March 5, 2005.

MacDonald is the career leader in college basketball wins at KeyBank Center with a 17-11 record from 1997 to 2006.

Since 1988, MacDonald has coached at the Division I, II and III levels, and he's made time to coach his sons in youth basketball, while never leaving the town in which he and his family settled. He's never had to cross state lines to take a new coaching job. Only city lines. He has only relocated once – to upgrade his family of six into a bigger house in Amherst.

MacDonald would appear to be a well-kept secret in college basketball. That’s not necessarily the case.

“I joke with him, all the time, that he’s like Mike Montgomery, who coached at Stanford, coached Golden State and then coached at Cal, and spent so much of his career in the same area. Here’s Mike MacDonald, who’s had three significant coaching jobs, and he’s lived right in the same place the whole time.” 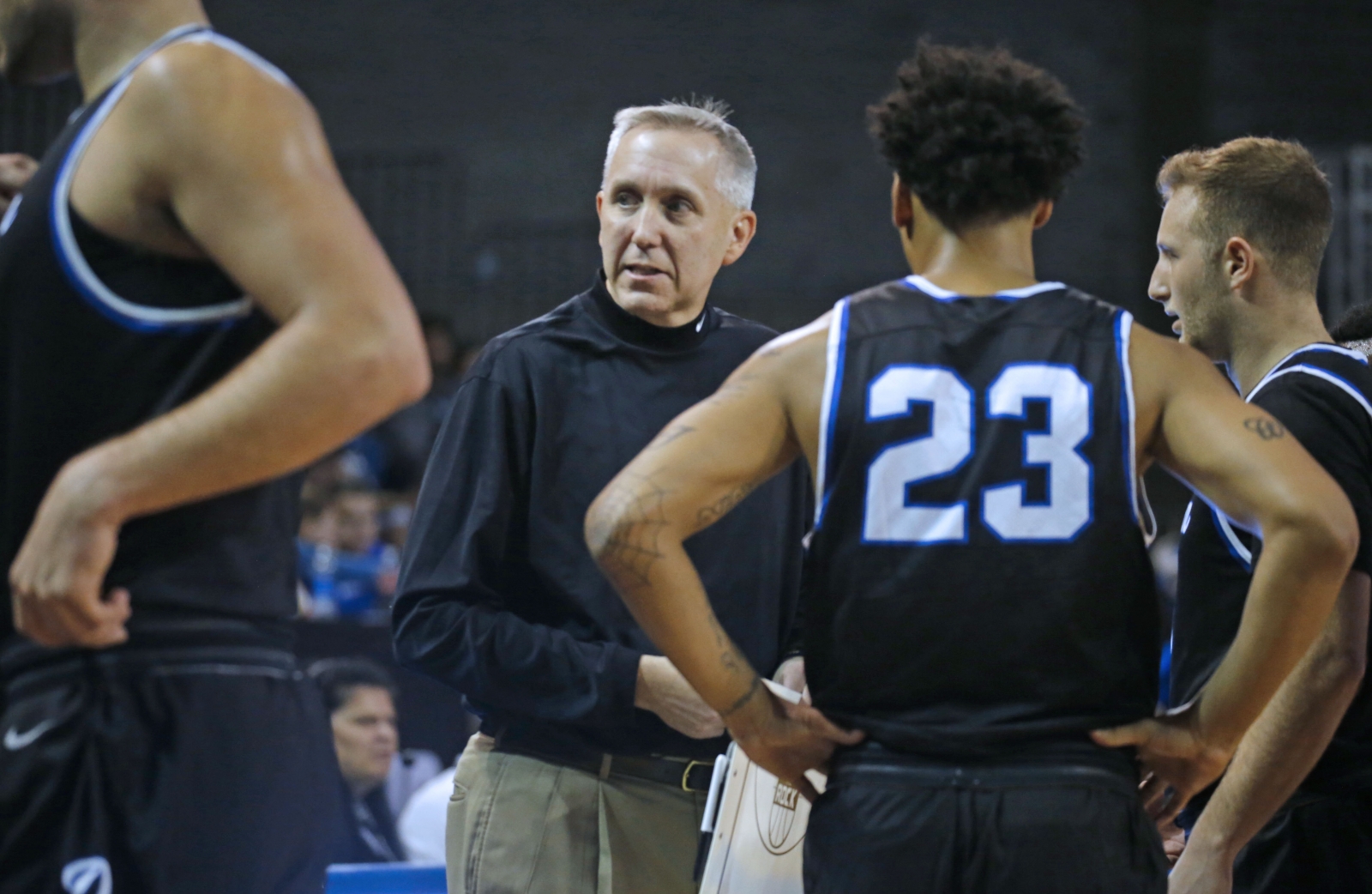 The second-oldest of five boys in his family, MacDonald discovered his passion for coaching when he was sophomore in high school in Ridgefield, Conn., and he coached his younger brothers in basketball.

“I thought, if this is what I can do for a living, I’d love to try and do it,’ ” said MacDonald, who is also a senior associate athletics director for external relations at Daemen, and teaches in the school’s sport management program.

MacDonald studied sociology at St. Bonaventure, but coaching college basketball was always his goal. He coached at Olean High School, and worked camp after camp in the summer at places such as Notre Dame and Xavier, hoping to latch on with a college program.

He got his first job in coaching as a graduate assistant at Lynchburg (Va.) College (now the University of Lynchburg) but met former Canisius coach Marty Marbach at a camp at Villanova and wrote him a thank-you note a few weeks later, as he was unpacking his bags in Virginia.

Right around that time, a graduate assistant left Canisius, and Marbach got in touch with MacDonald to ask if he was still interested in working at Canisius.

During his nine seasons as an assistant at Canisius, he worked with Marbach, then on John Beilein’s staff that took the Griffs to the 1996 NCAA Tournament. He also met his wife, Maura, whose brother, Mike, was being recruited by Canisius. Mike Heary went to the Naval Academy, but MacDonald continued to go to Fredonia to court Heary’s sister.

MacDonald was 108-153 as a head coach at Canisius, and while he led the Golden Griffins to a 20-11 record and a berth in the championship game of the Metro Atlantic Athletic Conference Tournament in 2000-01, he endured four 20-loss seasons.

Yet when he was fired in 2006, his second-oldest son, Patrick, found a silver lining in the setback.

“He said, ‘Hey, great, now you can coach my teams!’ ” Mike MacDonald recalled.

MacDonald coached Patrick at St. Benedict’s, and continued to coach his other sons. His oldest son, Matt, is a former captain at Penn and works in basketball operations with the NBA’s Brooklyn Nets. Patrick played at SUNY Maritime Academy and is now stationed in San Diego with the Navy. Nick is a freshman guard at Niagara and MacDonald’s youngest son, Mark, is an eighth-grader at the St. Benedict’s, less than a mile from Daemen’s campus.

He took over the men’s basketball program at Medaille in June 2006, at the urging of former athletic director Pete Lonergan, and was 148-73 in eight seasons.

He also turned down opportunities to be an assistant coach at programs outside Western New York.

“My kids were at the age where they weren’t in high school, or they were close, so I thought, ‘Let’s give it a try, and see if I can prove I can coach,’ ” MacDonald said “It was probably selfish, but I proved we could make it work. Eight great years.”

But a few weeks into the 2014-15 school year, he got a call from Bridget Niland, then the athletic director at Daemen. Would he be interested in coaching men’s basketball at Daemen?

MacDonald originally turned down the offer but saw the positives of the job, with some convincing from Niland. In MacDonald’s six seasons, the Wildcats are 111-44 and currently No. 17 in the National Association of Basketball Coaches Division II men’s basketball rankings.

MacDonald is in the fourth decade of his coaching career, and one has to wonder why and how MacDonald has lasted so long in a profession in which it seems that coaches are generally disposable, forcing them to lead a nomadic existence.

MacDonald laughs, when asked what the key to his longevity is.

“I’m too stupid to do anything else,” he said, with a wry smile.

“He’s a really innovative guy, in terms of basketball,” UB coach Jim Whitesell said. “He is always researching and learning new things. The other thing that stands out to me is that he is very knowledgeable and he is very humble whenever you talk to him. That’s what always shows up to me about him whenever I talk to him. He is never one to tell you how good his team is. You always have to get it out of him a little bit.”

McDonald, Armstrong said, has been successful as a coach, and he has endured failures. But it’s also because he has stuck to his principles in a profession that can sometimes turn nefarious.

“In sports, you don’t go undefeated,” Armstrong said. “We all face adversity and challenges, and twists and turns. A big part of this business is perseverance, and your reputation and trust and integrity. When you talk about Mike, those ring true.

“A lot of coaches have sold their soul. They’ll turn the other way for the greater good of winning. There’s cheating, or they don’t care if a guy graduates or not, and they’ll do whatever it takes to win. Mike, he’s going to kick your (butt), but he’s going to do it fair and square.”

MacDonald has lost count of the number of times he’s been involved in basketball in a downtown Buffalo arena. In addition to coaching college basketball, he’s been an analyst on basketball games that were broadcast from the downtown arena, and he coached in the Empire State Games, one of the last events to be held in Buffalo's Memorial Auditorium.

Saturday’s Canisius-Bona game will be the first time since December 2016 that a downtown arena will host a Big 4 matchup. Prior to that, a doubleheader in 2014 was the first in 16 years. Big 4 athletic directors acknowledged in August in an interview with the News that there isn’t an urgency to revive doubleheaders at KeyBank Center, and the landscape of the Big 4 has changed.

“There’s people who still believe in the Little 3 and the Aud doubleheaders, and they want to get that going again, but it’s a new world, and a lot has changed,” MacDonald said.

“But for us to be a part of this, for our guys, when I look at it, it’s a great experience for us to be a part of it and do something. My whole focus is with this team. We started playing on Oct. 24, against UB. Then we played at Syracuse. And you go all the way until November 23, so in a month we’ll have played at the arena downtown, the Carrier Dome, at Alumni Arena and we’ll have played in St. Joseph, Missouri. We’ll have played in some pretty cool arenas in one month’s time just to start the season. So, for us, this was a no-brainer. When you recruit, you have to sell the experience.”

Somewhere in Daemen’s busy first month, MacDonald squeezed in a trip to the Gallagher Center on Monday to see Nick play his first home game at Niagara.

Would he have been able to do that if he’d coached somewhere else? Probably not.

“I grew up, I lived in the same town for so long, and my parents are still there,” MacDonald said. “I went from kindergarten through 12th grade in the same school system in Connecticut. My wife grew up in Fredonia, where her father was a principal at Fredonia High School. She never moved, either.