The owners of a thriving fitness center along Transit Road are about to breathe new life into the former Eastern Hills Mall location of the Buffalo Athletic Club.

Jada Blitz Fitness owners Justin and Ashley Draper are putting the finishing touches on a major renovation of the club, which closed five years ago after the L.A. Fitness chain bought four co-ed BAC facilities in Buffalo and two in Rochester.

“Health and wellness is not a one size fits all approach and the new facility will allow us to offer an array of options to our new and existing members,” said Justin Draper, a former University at Buffalo football player with a degree in business management and health and wellness. He has been a personal fitness trainer for a dozen years.

Jada Blitz on Friday closed its existing five-year-old club in a small strip plaza out front of the Eastern Hills outparcel where the BAC once stood. It will reopen at 5 a.m. Nov. 29 in its new digs.

The relocated, revamped nearly 30,000-square-foot fitness center is more than triple the size of its previous home. It will allow the Drapers to offer locker rooms, saunas, cycling sessions, more equipment and more group fitness classes.

“We've been limited with being able to offer personal training and very small, more individualized group classes because we just haven't had the space,” Ashley Draper said.

Jada Blitz started seven years ago in Lancaster as a small personal training studio. It had 100 members in the weeks after it opened on the Clarence side of Transit Road in the fall of 2014 and has about 1,300 now.

The couple looks to welcome more members as the new Jada Blitz gets up and running. It has six membership pricing options and as part of opening weekend will offer zero enrollment and no payments until January, as well as a $299.99 paid-in-full option. 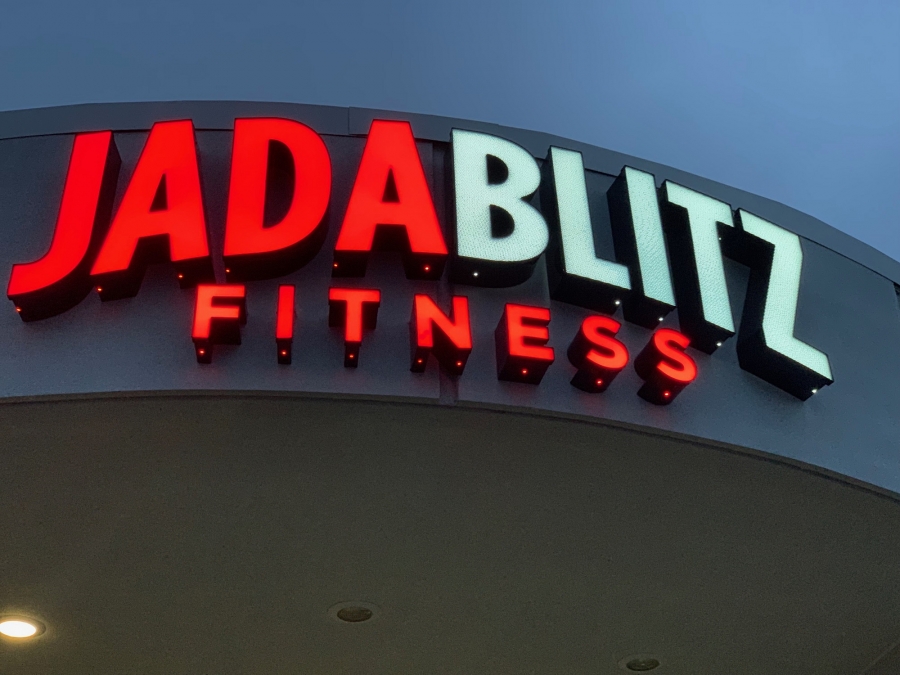 New exterior signs are the first of many changes Jada Blitz Fitness members and prospective members will see when they arrive at the new location of the Clarence business at 4687 Transit Road. (Scott Scanlon/Buffalo News)

Those who have been in the refurbished space at 4687 Transit Road during the four decades when it was first a racquetball club and later the BAC will recognize the overall surroundings. The locker rooms, saunas, front desk and group fitness rooms remain in the same spots but have been upgraded with new flooring, finishes, fresh paint and other features.

The Drapers expanded the reception desk on the first floor, carved out space for the couple’s full-service healthy prepped meal business, Balanced Body café, and will offer Lululemon, other apparel and nutritional support in the spot where the cardio room once stood.

A room devoted to Olympic-style powerlifting and CrossFit training also sits on the ground floor.

Cardio equipment will share space with strength training equipment on the southernmost section of the second floor, which now overlooks the first floor, where large windows have been added.

A second-floor Blitz Room in the old BAC cycle center, features a bounce floor ideal for high-impact functional group fitness training. An app will allow members to track their heart rates and other metrics during classes.

“People are very driven right now by what they're personally achieving, what calories they're burning or how many steps they're taking,” Ashley Draper said. “Everybody wants data, so it's a very fun way to bring that into the classroom.”

A first-floor strength training room on the north half of the building which will mostly be used for personal training teems with new Arsenal Strength equipment and free weights.

Connect kinetics physical therapy and Sara Pura Massage will make the move, too, and a new spray tan company, Haute, will also set up shop.

Child care, towel and concierge services, and lots more TVs, are among other touches.

The BAC sold its four co-ed clubs in late 2013 to L.A. Fitness, which continues to operate fitness centers in former BAC locations in downtown Buffalo and Cheektowaga, as well as facilities it opened on its own on Elmwood Avenue in Buffalo, as well as in Amherst, Clarence, Hamburg, Niagara Falls and West Seneca.

Two BAC for Women sites remained open, though operating partner Rick Leugemors told members by email this month that the branch at 480 Evans St. in Williamsville will close late next month when the lease expires, and be consolidated into the remaining location at 3157 Eggert Road in the Town of Tonawanda, which has undergone a $1 million renovation in recent years.