It started for Greg Scoma in the same way as it did for generations of Western New York children.

More than 50 years ago, he and his little brother, Jeffrey, ran downstairs on a Christmas morning to find a big rectangular gift beneath the tree, wrapping paper taped over a game that Scoma hardly guessed would become a central passion in his life.

He was about to discover table hockey, a miniature rink on which flat metal players controlled by twisting rods did endless patrol within specific slots, a frantic action that became second nature in countless Buffalo childhoods. By 1970, once the Buffalo Sabres arrived at the old Memorial Auditorium, Scoma, his brother and their young friends were utterly entranced by this tiny version of the sport.

“Oh my God, they were playing it everywhere,” said Greg's mother, Judy Scoma, who raised her boys on her own, then retired after 34 years at the General Motors plant in Tonawanda. “He just lived and ate and slept table hockey, and now I see it happening all over again.” 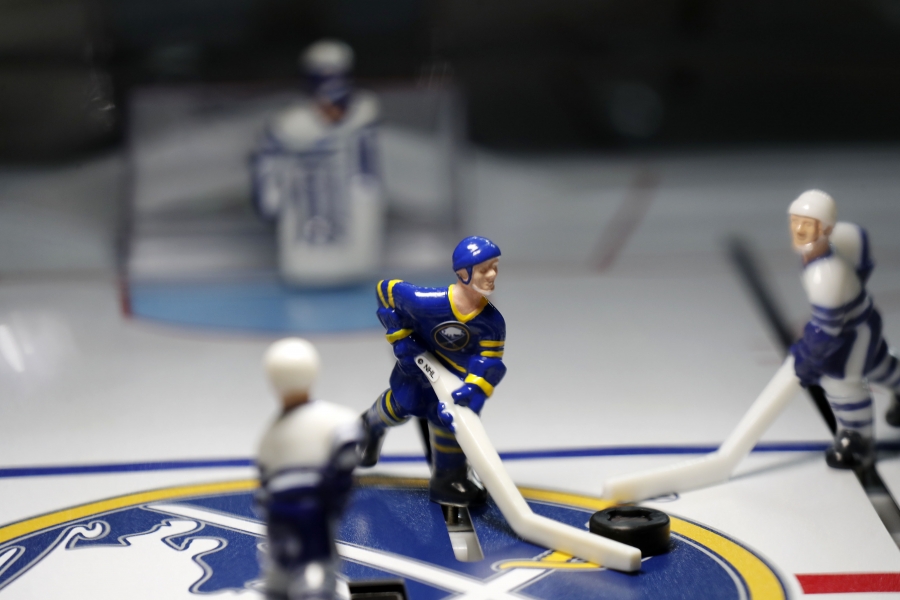 The Buffalo Sabres play the Toronto Maple Leafs in a Super Chexx bubble hockey game that will be part of this weekend's big tournament in Buffalo. (Mark Mulville/Buffalo News)

Decades after teaching himself how to make a tiny defenseman feed the center or how to blast a slapshot from the wing, Scoma, 59, is now founder and president of the World Table Hockey Association, which hosted an international tournament this weekend that concludes today at Buffalo RiverWorks.

“Having it here was just kind of a gravitational pull,” said Scoma, who dreams the first-time event will evolve into an annual attraction.

The tournament arrived after the Buffalo Niagara Sports Commission put in the most impressive proposal, Scoma said. The region is also home to Innovative Concepts in Entertainment, a Clarence company that manufactures the anthem-blaring bubble Super Chexx hockey games with three-dimensional players that are commonplace in many rinks, arcades and taverns.

"We're very excited to have this in our own backyard," said Greg Kania, a Super Chexx spokesman. About 10 bubble hockey games are set up at RiverWorks - to buy one for your home, said Lindsey Goffena of Super Chexx, would go for about $2900 - and the tournament also features competition on several well-established games created by other companies, games that Scoma said are as subtly different as musical instruments.

Stiga, for instance, a Swedish manufacturer, produces the version used by, yes, the United States Table Hockey Association, which has formally embraced the competition here – leading USTHA president Kevin Rafferty to note that some of the finest players in North America will show up in Buffalo.

It is a long way from, say, crawling around in your family basement to find a tiny puck after it careened off the "ice" and rolled beneath the tubs by the washing machine. 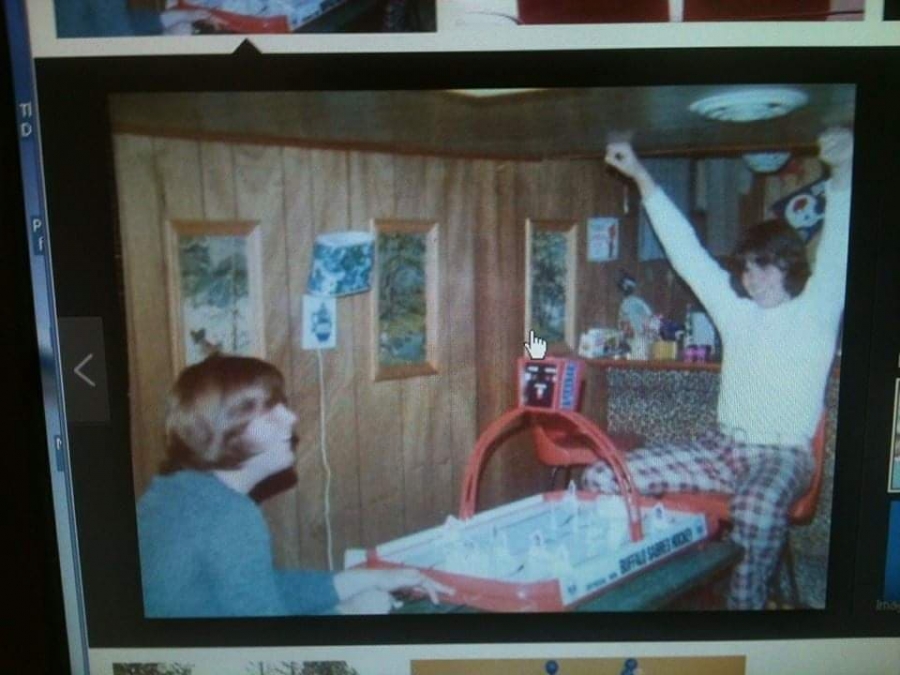 While professional divisions are offering $1,750 in prize money, Scoma wants to emphasize this point: If you enjoy goofing around with bubble hockey in a bar, or if you still have powerful memories of taking on your buddies in your childhood dining room, he hopes you consider entering the amateur division if the tournament returns next year.

Almost 40 years after leaving Buffalo to join the Marines, Scoma now works in Washington, D.C., as a specialist in battlefield security for American soldiers. While his profession involves a sense of intense responsibility, he sees table hockey as a reflection of friendship and communion – and always as a reminder of Jeffrey, his younger brother, who died four years ago.

Judy Scoma said Greg Scoma was a “meticulous” child, a point underlined by his friends. "Once he got his hooks into something, he was all in," said Rich Finn, an engineer and a boyhood companion who recalls how Scoma, a Riverside graduate, not only created leagues for street hockey and table hockey in their North Buffalo neighborhood, but kept detailed standings and statistics for both.

Their original table hockey league had eight players. The first home arena was Mark Oblick's house, entirely because his parents happened to have one of those classic, paneled 1970s finished basements. The boys set up their old Coleco game on Oblick’s table tennis table, then built a league where every kid had his own National Hockey League team of flat metal players in uniforms from different cities.

If needed, Scoma said, they painted those figures by hand.

The kids grew into teens with expanding interests, and the old friends from Eugene Avenue eventually went their own ways. It was not until the mid-2000s that Scoma, a solid 30 years beyond the childhood version of the game, came upon an ad for a table hockey tournament in New York City.

“Until then,” he said, “we’d never really had a chance to test how good we were.”

He showed up and finished third. That did it. Scoma became a fervent participant in tournament play, and all the old organizing traits reignited. He founded the World Table Hockey Association in 2010, and he said it was all but inevitable that he would someday hold a tourney in Buffalo – an event that he said, if all goes well, could be here for years to come. 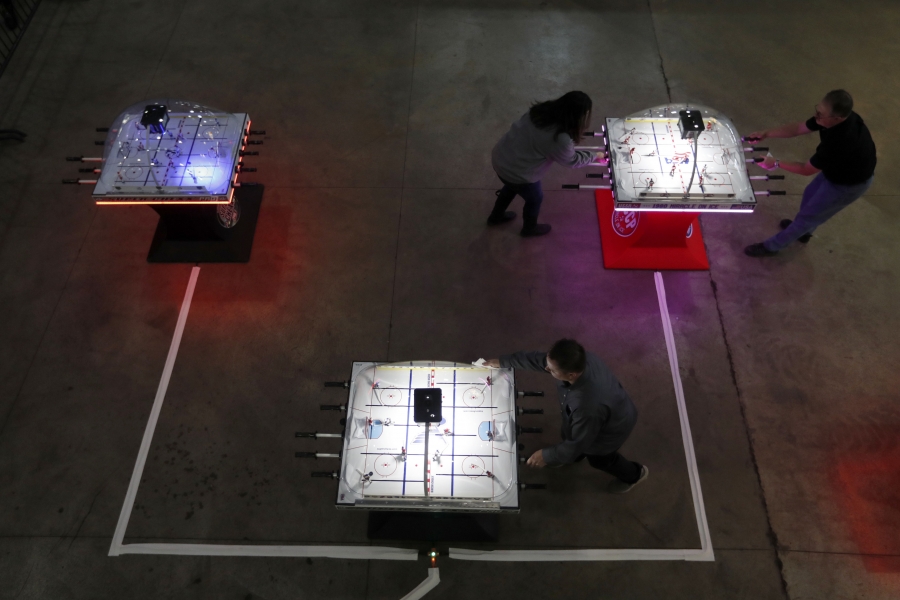 Oblick, who signed up to play in a formal way for the first time in years, said his own sons never embraced table hockey, preferring 21st century video games. Of his fate in the tournament, Oblick was counting on some of the old hand-switching, frantically-reaching-for-the-goalie mania retaining a kind of latent presence.

Within the tournament, every game – and each competitor plays a lot of games – lasts five minutes. The most important rule is that a player can hold the puck no longer than five seconds. While that is meant to guarantee a certain velocity, Scoma said the real heart of the thing is in the way “you look across and see your opponent, and you’re competing with a real person and not someone on a screen.”

He has witnessed lasting friendships cemented by table hockey, even among people who see the world in wildly different ways. “It’s a great social bridge,” said Scoma, who will be thinking throughout the tournament about his brother, the guy with whom he shared a childhood room and years of table hockey battles.

As for the game itself, it was invented amid the Great Depression by Donald Munro of Toronto, whose toy company would eventually be purchased by Servotronics of Buffalo. Table hockey quickly became a kind of familiar tradition in Canada, a passion that soon found its way to the border.

In New York City, John Dellapina, an NHL spokesman, confirms that commissioner Gary Bettman keeps an “old-school game” in his office. Table hockey certainly carries plenty of resonance on the Niagara Frontier, where an awful lot of us recall going at it for hours while Lake Erie snow piled up outside, which brings Scoma to his central wish for this new tournament.

He hopes this region sees it as a kind of giant box, waiting beneath the tree.

Did you routinely play table hockey as a child? If so, columnist Sean Kirst would like to hear those memories: Leave a comment at the end of this piece or email him at skirst@buffnews.com.