The arsenic, mercury and other toxins found in the ground on most properties surrounding the former Tonawanda Coke plant generally are at safe levels, according to the scientist leading a court-ordered soil study.

But two rounds of collecting and testing soil samples in sections of the Town of Tonawanda, City of Tonawanda and Grand Island have identified areas of elevated contamination that may need to be cleaned up, though they don't present an immediate danger to the public.

Researchers from the University at Buffalo and SUNY Fredonia planned to present these findings Thursday evening at a community forum, where they were scheduled to update residents on the progress of the 3-year-old soil study.

Scientists and volunteers have finished collecting samples from hundreds of locations in the three communities. Researchers, working with a private testing lab, for the most part have identified the toxic chemicals and their concentration levels.

Two key questions remain: Which properties are so contaminated that they require cleaning up, and which contaminants can definitively be traced to Tonawanda Coke?

"I feel that people should understand that this is not a clear statement of contamination that is immediately dangerous but worthy of further consideration by residents and community leaders," said Joseph Gardella Jr., the UB chemistry professor leading the soil study.

Tonawanda Supervisor Joseph Emminger said the study results show residents don't need to worry about contamination that may have come from the Tonawanda Coke plant and that no cleanup is required.

"Typical of a suburban-urban community. The findings are not outside the norm. We’re an industrial area – everything they found was to be expected, I think," Emminger said.

Emminger and and Jackie James-Creedon, a founder of the nonprofit Citizen Science Community Resources, continue to object to how UB conducted the study and to call on the university to provide access to the underlying data. However, whatever their concerns, they say the bigger victory was the plant's closure in October 2018.

"We need to move on. We need to move forward, and we need to heal and move past this tragedy that happened in our community," James-Creedon said. "I don’t want to see more data."

Environmentalists and elected officials had long complained about pollution generated by the coke plant, which sat on 140 acres on River Road.

Tonawanda Coke was fined $25 million after it was convicted of criminal wrongdoing at a 2014 federal trial. The state Department of Environmental Conservation in 2018 ordered the plant closed, and state and federal environmental regulators took over the facility late last year and began to address the immediate, on-site dangers.

Even before the plant closed, researchers from UB and SUNY Fredonia had started a $711,000 soil study ordered by U.S. District Judge William M. Skretny. 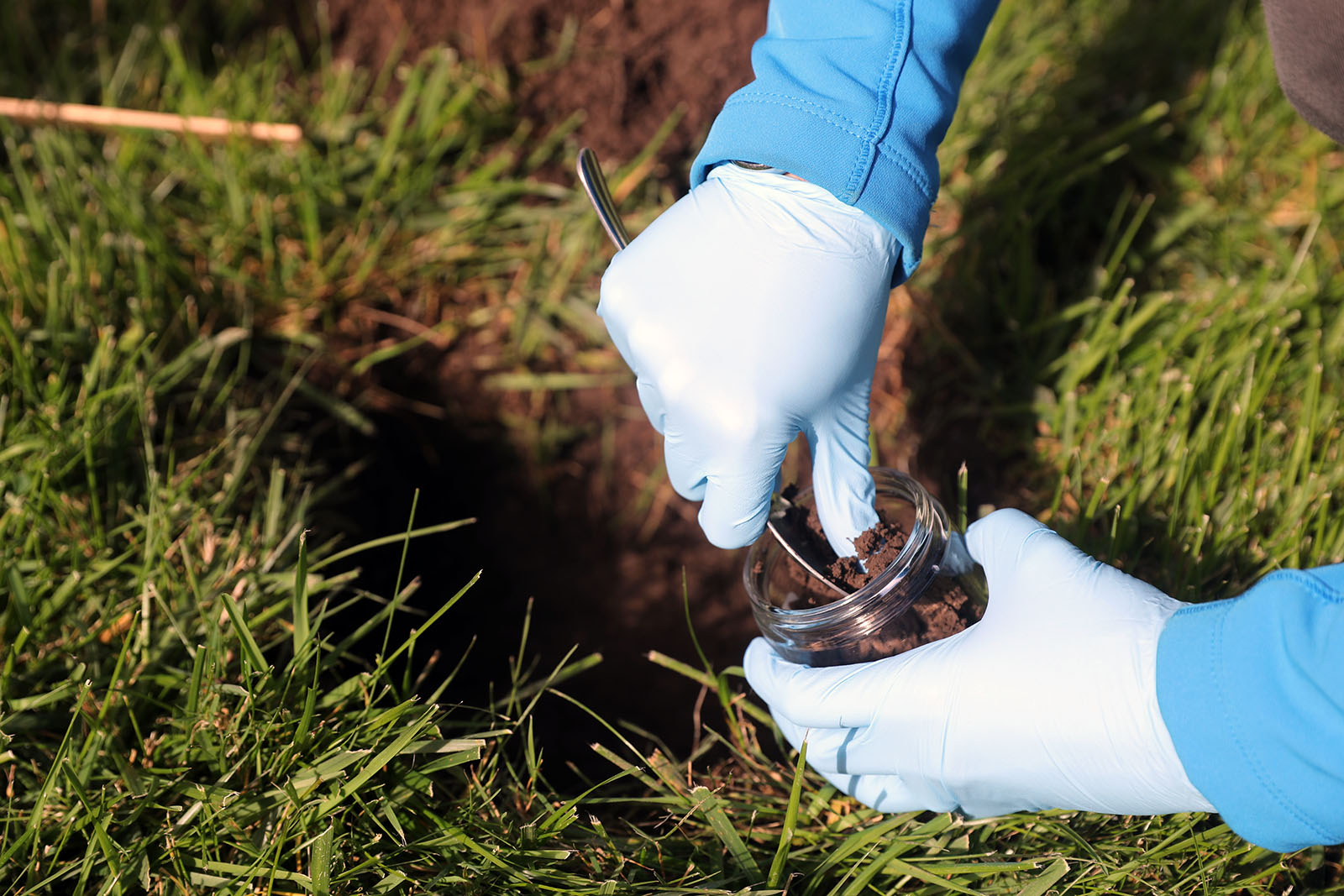 A UB student takes a soil sample in October 2018 as part of the study. (John Hickey/News file photo)

Scientists and volunteers in 2017 took samples at sites throughout the Tonawandas and a portion of Grand Island where pollutants from the coke plant could have spread. Owners had to give permission for the scientists to collect samples on their properties, and they were promised confidentiality in return.

The soil samples were screened for about 170 chemicals. Researchers revealed those findings to the public in January.

The results of the first phase of soil testing led UB to focus on three areas in the second phase of sample collecting, which took place in 2018.

Those three areas were a section of the Town of Tonawanda surrounding the Tonawanda Coke plant; an area northeast of the plant in the City of Tonawanda; and a neighborhood in southeastern Grand Island across the Niagara River from the plant.

In addition, the researchers offered to take soil samples at any school district property in the testing area – Grand Island and City of Tonawanda districts accepted – and at churches.

UB and Fredonia scientists and a private lab analyzed the samples and generated a series of maps showing the extent of contamination throughout the testing area.

"I want to be clear: Large areas of the study, which we said after phase one, are free of systematic contamination. And the values we saw were below the state and federal standards," Gardella said.

Some areas of concern

The risk to public health is based on a number of factors, such as age, general well-being and in what way and how often someone comes in contact with the contaminant. And the boundaries in the maps aren't precise indicators of contamination levels but calculated estimates of where such toxins could be found.

Some areas do contain higher levels of the contaminants that may necessitate a cleanup led by the state Department of Environmental Conservation or the U.S. Environmental Protection Agency.

The most concerning set of chemicals, Gardella said, is the polycyclic aromatic hydrocarbons, or PAHs, a class of chemicals tied to increased rates of cancer. It's difficult to say where they came from, though, because PAHs could have come from Tonawanda Coke, the former coal-powered Huntley generating station in the Town of Tonawanda, truck traffic or even backyard grilling.

Gardella said the research team doesn't want to alarm residents, "but people may want to ask questions of their elected officials on this. That's the message."

Gardella said it's not up to the scientists to decide whether or where to conduct such a cleanup. The EPA said it had not yet had a chance to see the soil study update so it could not comment.

The DEC said it is waiting for the final study results linking any off-site contamination to Tonawanda Coke before evaluating the need for off-site remediation.

Emminger and James-Creedon, who got an advance look at the second-phase results, say it's apparent the study team didn't find anything concerning in the soil.

That doesn't mean they, and other community leaders, are happy.

"It’s hard to have confidence in something that you do not have full disclosure and understanding of the methodology. We’re just told, 'Believe us. It’s all good,' ” Grand Island Supervisor Nate McMurray said.

Emminger and James-Creedon continue to believe UB has not acted in good faith and has not properly engaged with the community in conducting the soil study.

For example, James-Creedon still objects to the decision to take soil samples at a depth of 6 inches. Taking samples at 2 inches would better show what health risks residents now face, she said. Gardella said the deeper reading more accurately shows what historical contamination exists in the ground.

Citizen Science Community Resources still is battling with UB over the $711,000 funding for the soil study, arguing the university has mishandled this money and must pay some of it to the nonprofit organization. Skretny, the federal judge, in March ruled that UB has conducted the study appropriately.

But in October, at the request of the community group, an assistant United States attorney in Buffalo asked the university to provide details on its management of the soil study and a related environmental health study. Gardella said he plans to respond by the Friday deadline and repeated his contention that the UB-led team has done nothing wrong.

The community members also want UB to release the underlying study data and to allow an independent third party to review the team's methodology.

"They are not being as transparent as we would like on the study,” Emminger said.

But Gardella said confidentiality agreements prohibit the team from releasing this data and that federal and state regulators already have reviewed the study team's methods.

The Town and City of Tonawanda agreed to let the study team take samples on municipal properties and later received the test results from UB. However, the town and city have blocked UB from including the findings in the maps generated from the soil samples. This represents about 20 samples in the two communities, Gardella said.

"He's been talking about the need for transparency, and I think it's a two-way street," Gardella said of Emminger.

The final step in the soil study is to link contaminants in the ground to Tonawanda Coke. Gardella said he expects this work to finish by the end of next year.

Meanwhile, the cleanup on the former Tonawanda Coke property is proceeding. The EPA said it is preparing to leave the property once the new owner receives a required discharge permit and the DEC can take on oversight responsibilities there.

Developer Jon M. Williams in October completed his purchase of the Tonawanda Coke property, which he intends to turn into a computer data center once the cleanup is complete.

As for the surrounding area, elected officials and community leaders say they're taking a pragmatic view.

“The air was polluted. We know that. That’s over, and that’s a good thing for everybody,” McMurray said.