Time is relative — on screen and off. In Martin Scorsese’s “The Irishman,” an epic exploration of American crime and politics, time shifts suddenly, and often without warning. The result, however, is always the same: either violent death or guilt-ridden decay.

Grim endings are often the case in Scorsese’s films, especially his 1990s and 2000s gangster dramas — “Goodfellas,” “Casino,” “The Departed.” “The Irishman” feels different, though. It’s a film that could only have been made at this point in the careers of Scorsese and stars Robert De Niro, Al Pacino and Joe Pesci. (A special local note: the film co-stars Buffalo-born actor Patrick Gallo.)

Creating “The Irishman” required a maturity that only comes after a lifetime of cinematic excellence, and an ability to acknowledge that there is nothing more devastating than regret.

The makeup of this story — a truck driver turned hit man named Frank Sheeran tells of his friendships with Mafia kingpins and his role in the disappearance of Jimmy Hoffa — includes elements of the kinetic energy of “Mean Streets” and "Goodfellas" and the epic, going-to-hell tapestry of “Casino.” But more importantly, it also has the end-of-life solemnity of 2017’s "Silence."

The result is a late-period masterpiece for Scorsese. A sterling cast, fascinating story and the use of de-aging CGI effects make the film a genuine, modern cinematic event. That “The Irishman” is being released by Netflix and available for streaming after a small theatrical release makes it even more newsworthy. 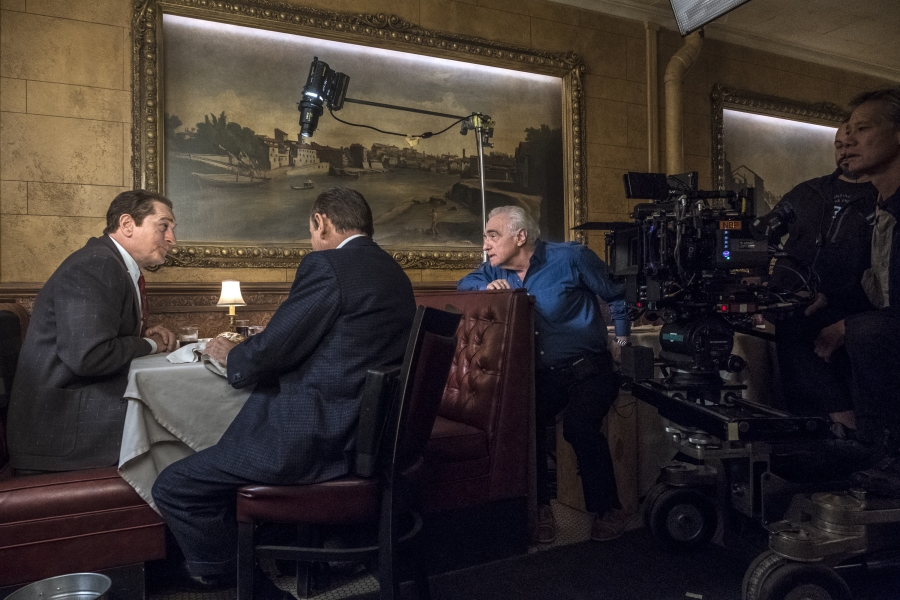 Charles Brandt’s “I Heard You Paint Houses” — the title refers to murder — was a nonfiction account of Frank Sheeran’s life, featuring the words of Sheeran. Fittingly, “The Irishman” opens with an aged Sheeran, deftly underplayed by De Niro, telling his story. Much of the dialogue is taken directly from Brandt’s gripping book.

Sheeran developed an ease with killing as an American GI during World War II, a talent that served him well years later. He moved from a truck driver and low-level enforcer to one of crime boss Russell Bufalino’s most trusted men. Bufalino is played by Pesci, in a welcome, quietly fearsome return to the screen.

Bufalino introduced Sheeran to Hoffa, the Teamsters president whose fame, Sheeran explains, cannot be overstated: “In the '50s, he was as big as Elvis; in the '60s, he was the Beatles.” Hoffa is played with noisy relish by Pacino, working here with Scorsese for the first time.

Sheeran grew close to Hoffa, putting himself in a tricky position. After all, mob figures like Bufalino used the Teamsters pension fund as a quasi-bank, with Hoffa’s approval. For a time, that is. When Hoffa and the mob began to battle, Sheeran was caught in the middle. He ended up with a key role in the headline-grabbing and still unsolved Hoffa disappearance.

It’s a dense story, full of shifts in time and touching on events like the Kennedy assassination. The CGI work used during these changing time periods is at first jarring — most notably the first meeting of Sheeran and Bufalino. But thanks to De Niro and Pesci’s skillful, soulful performances, it quickly becomes barely noticeable.

This should be no surprise. As he has throughout his career, Scorsese has expertly chronicled human nature and violent behavior. The pace of “The Irishman” is far, far different than his earlier crime classics but the resonance is just as great, if not greater.

“The Irishman” is the logical culmination of Scorsese’s career-long exploration of masculinity, violence and the effects of both: no one gets away clean.