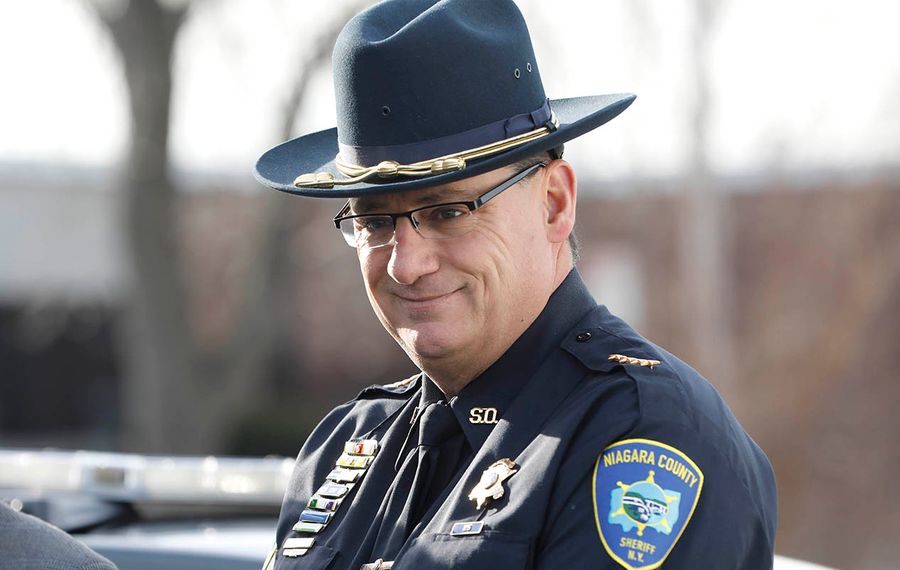 Law enforcement agencies across the state on Thursday plan to call for a delay in the implementation of laws that would end cash bail for most misdemeanors and nonviolent felonies and require evidence to be turned over to defense attorneys within 15 days of arrest or indictment.

The new criminal justice reform laws, passed earlier this year as part of the budget, are set to go into effect on Jan. 1.

"Bail and discovery reform will change the criminal justice system in New York State, but not for the good of the law abiding citizens of the State and Niagara County," said Niagara County Sheriff James R. Voutour, who is also the chairman of the Executive Committee of the New York State Sheriffs' Association.

Voutour called on the state Legislature and the governor to delay the implementation of the changes.

Law enforcement officials say the criminal justice reform laws, passed earlier this year as part of the state budget, don't give judges discretion in deciding whether a defendant should get bail. They also point to the "discovery bill" which speeds up the timeline for when law enforcement must hand over evidence ranging from police reports and footage from body-worn cameras to the names of witnesses.

They also note that the state has provided no funding to implement the new reforms.

A local news conference on the matter is scheduled for 10:30 a.m. Thursday.

Criminal justice reform advocates have long argued that cash bail is unfair to poor defendants who end up spending more time in jail simply because they cannot afford to pay up.

Last year, the Partnership for the Public Good released a study that found that Buffalo City Court judges set monetary bail as a condition of release in nearly two-thirds of cases and that only one of six judges "routinely asked defendants if they were employed and what they could afford to pay in bail," the report said.

"The system punishes poor defendants before their case is heard in court," wrote Andrea O Suilleabhain, now the director at the Partnership, and Colleen Kristich, a master of social work candidate at the University at Buffalo, in their policy report "Cruelty and Cost: Money Bail in Buffalo."

The bail amounts that were observed for the study were also significantly higher than what is imposed in New York City courts, the study found.

The median bail amount was set "five times higher on misdemeanors in Buffalo, and twice as high on felonies," the study found.

When assistant district attorneys asked a judge to set bail, the court watchers found the arguments "tended to focus mainly on past failures to appear in court." The observers said a quarter of the defendants were wanted by another judge on a warrant or had previously failed to appear for a court date.

In Erie County courts, District Attorney John Flynn has already directed his assistant district attorneys to stop asking for bail in most misdemeanors and nonviolent felonies. He said it's already having an impact. Last year on Sept. 1, he said, there were 1,006 people being held in the Erie County Holding Center as they awaited trial. He said on Sept. 1 of this year, that number was down to about 606.

"It's gone down 40% already," Flynn said in an interview earlier this fall. "The numbers are dramatic."

In a news release about Thursday’s planned news conference, the organizations calling the event – the state associations of district attorneys, chiefs of police and sheriffs – said other states that have implemented bail reform have "given judges the resources to make proper decisions about who should be held and who should be released." The groups said New Jersey, after implementing a cashless bail system, allowed judges to use “risk assessment” to consider a defendant’s criminal history and the charges they faced in order to establish what level of danger they pose to public safety.

But New York’s bail reforms do include a risk assessment provision, according to an analysis by the Center for Court Innovation.

"Courts may consider information from formal release assessment tools that are designed to predict a defendant’s likelihood of appearing in court," the organization, identified by the state Unified Court System as its independent research and development arm, wrote in an April report.

District attorneys across the state have also been calling funding from the state to pay for the extra work their offices will have to do, particularly when it comes to handing over evidence within 15 days. Flynn said he is asking for 18 new hires, including two attorneys, at a cost of $1.2 million.

Cuomo has so far signaled that he's not willing to provide any extra money for criminal justice reform.