The botched initial asbestos cleanup at the former AM&A's department store building downtown has drawn scrutiny from the FBI and other state and federal environmental regulators, according to documents and interviews with people familiar with the project.

Six people familiar with a Chinese investment group's $70 million redevelopment of the 10-story complex say it has been the target of probes by city, state and federal officials over the past few years, even as the ambitious venture has been bogged down by other missteps and delays in financing.

Agents from the state departments of Environmental Conservation and Labor, the U.S. Environmental Protection Agency and even the FBI have been on the Main Street site, investigating everything from environmental and labor violations to how the project is being financed, according to a Buffalo News review of court documents and interviews with the Labor Department and sources who spoke only on condition of anonymity.

Investigators in 2017 toured the building in the midst of the asbestos remediation – in full hazard gear – and they’ve questioned people involved in the project, added two of the sources, who either spoke with or observed the federal and state agents.

After $8 million was spent on asbestos cleanup, the site is now ready for redevelopment, project officials said. City officials have described the cleanup as milestone for the long-delayed project.

But documents obtained by The Buffalo News and interviews show significant hurdles along the way, including:

• The original asbestos cleanup firm from Long Island, Tristate Cleaning Solutions, was cited for 61 violations of state environmental laws, and has been banned from operating in the state, according to the Labor Department. No criminal charges were filed and the state investigation is completed.

• The independent monitor working with that firm had prematurely declared areas of the building to be clean, despite debris on the floor and materials hanging from the ceilings, three of the sources said.

• The former president of the contractor managing the project for the building owners notified regulators and quit when he learned of the problems, according to letters he wrote to city and state regulators.

• Local remediation experts had earlier expressed concerns about the quality of the work, according to the letters submitted to the city and state.

• A downstate cleanup firm, Clean Air Abatement, and local environmental monitor, AMD Environmental, were brought in to finish the asbestos removal in June 2017. But Clean Air says it has not been fully paid for its work, and is currently in litigation with the building owners.

Meanwhile, funding for the project is still not finalized and work has been at a standstill for months – disrupting traffic, frustrating nearby building owners and their tenants, and angering city leaders. Project officials say they are working on developing a new timeline to start construction, but are seeking new engineering and architectural drawings.

There are additional problems below the surface.

The AM&A's property includes two 1,200 gallon oil tanks 40 feet beneath Eagle Street and leakage has occurred, though the situation does not require remediation, according to the Department of Environmental Conservation. The DEC concluded there was no reason to dig up the tanks.

A block of Washington Street remains closed to traffic because the deterioration of the AM&A's building's utility vault underneath has left the road unstable. Neighbors complain frequently about the dilapidated former department store that sits vacant in the downtown core.

"I wish it would get going,” said Keith Belanger, a senior vice president at M&T Bank Corp. and chairman of the Buffalo Place board of directors. “It’s an eyesore in the middle of our downtown.”

Neither the Chinese investment group that owns the AM&A's building nor Tristate Cleaning Solutions responded to requests for comment. But local construction officials on the job, including the general contractor's president, Brian Frost of Loung Construction, said the project is moving forward. 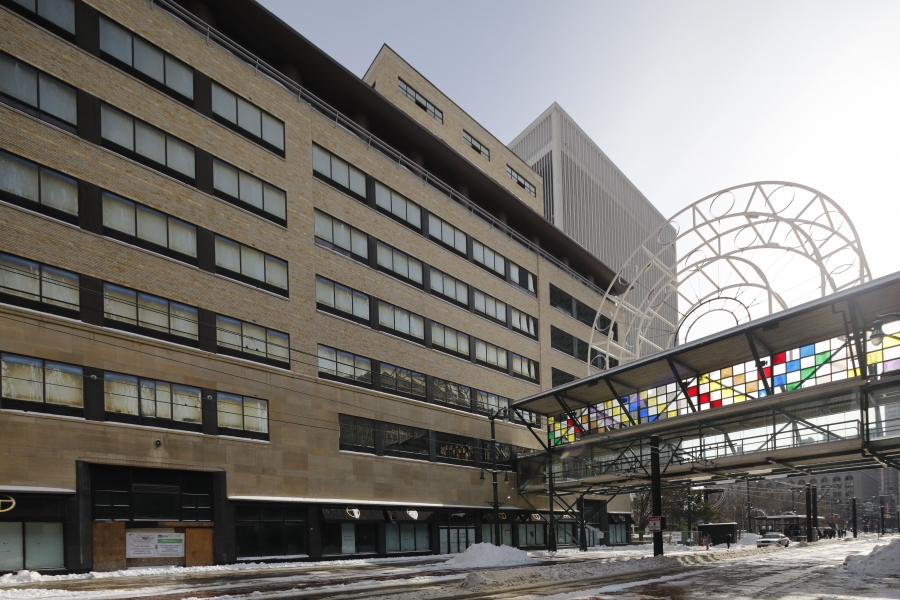 From retail store to Wyndham hotel

Landco H&L, a Chinese investment group based in Queens, made headlines in 2014 when it emerged from nowhere to purchase the 375,000-square-foot landmark at 377 Main for $2.775 million.

The group initially unveiled plans to create a hotel for Asian tour groups visiting Niagara Falls, but eventually proposed a full Wyndham Buffalo Hotel with more than 340 guest rooms, two restaurants, a New York City-style nightclub, an arcade, retail space, banquet and meeting space, and a pool and spa in the basement. As part of the project, crews would carve a 10-story atrium into the center of the building to provide windows for interior rooms.

Work on the asbestos cleanup began in 2016, but progressed slowly, with frequent starts and stops.

The News obtained two letters that pointed to troubles early on during the initial asbestos removal, prompting the local head of the project to resign and alert city and state officials of his concerns in 2017.

"Recently I learned from two local and highly respected asbestos monitoring entities that there are possible regulatory violations occurring at the AM&A's site," wrote John Schenne, a local veteran engineer who worked on the project and served as president of Loung Construction, the contractor created by the Chinese ownership group.

"Although I have no responsibility for asbestos removal activity at this job site, upon learning of the concerns identified by these two monitors, I immediately ordered this job site closed," Schenne stated in a March 27, 2017, letter to James Comerford, the city's commissioner of permits and inspections.

In a separate letter alerting the state's Department of Labor, Schenne explained that he "ordered the workers off the job ... in an abundance of caution."

Schenne noted that he had already submitted "clean letters" on behalf of Loung Construction to validate remediation work that had already been done to meet standards. He wrote in his letter that he had relied on a state certified independent monitor, Ambrose Francois of New York City.

When Schenne learned of the concerns by the other experts, that prompted him to resign from his post with Loung, he said.

It was Schenne's complaints that brought state inspectors to the site, resulting in the 61 violations against Tristate, according to two of the sources.

Schenne declined to comment for this story, but during a deposition as part of a lawsuit he said there were multiple federal and state investigations into the asbestos removal at the AM&A's site.

The News has filed a state Freedom of Information Law request for details on those violations with the Department of Labor, which oversees asbestos removal and safety of workers. The request is pending.

But the Labor Department says there were remediation issues that included not only disposal issues, but failure to conduct daily air samples, inadequate equipment and lack of paperwork certifying workers were properly trained.

Peter Brancato, a Labor Department spokesman, said Tristate has been removed from a list of state-certified asbestos removal contractors. It was also fined $18,000 and barred from getting public government contracts for one year in July by the state Workers' Compensation Board, for failing to maintain insurance, according to state records.

However, no federal violations or criminal charges were lodged against the firm, unlike in some other cases when asbestos removal irregularities have been investigated. The Labor Department said that Tristate's ban from future asbestos abatement jobs resolved its investigation and the violations.

Tristate President George Kourkounakis could not be reached for comment. Tristate's lawyer, Lisa Schwartz of Great Neck, did not respond to messages from The News.

Tristate later sued Landco and Loung Construction for nearly $650,000 in unpaid work after it walked off the AM&A's job, and Landco and Loung countersued, accusing Tristate of "improper, negligent or otherwise careless work" that delayed the project and caused one of the building's roofs to collapse. Landco, which sued Tristate for $900,000 in damages, also alleged that Tristate workers stole copper boards from the building's antique escalators.

The lawsuit went to trial in October and a jury awarded no money to either side.

But the stalled venture has in recent weeks drawn the attention of Common Council President Darius Pridgen, who has threatened legal action. Officials with Buffalo Mayor Byron W. Brown's administration also say they are growing weary of the lack of progress.

Several other liens had also been filed against the project by contractors, including the second asbestos firm, as well as DGA Builders of Pittsford. An attempted foreclosure by the former owner of the AM&A's building – Apollon Group of Roslyn Heights on Long Island – ended in February when Landco paid $2.18 million to pay off the mortgage that Apollon held.

It's also unclear who is in charge at Landco. The investor group, which owns Loung, has undergone leadership changes since it came on the scene in 2014. It now appears to be headed by a woman named Xiaomei "Sally" Lu of Queens, according to the most recent state government documents.

Attorney Jiajie "Jeffrey" Cao of New York City – who defended Landco in the Tristate lawsuit and whose office is located in the same building in Flushing as Landco – declined to identify individuals with links to the group. He said he would relay The News' request for comment on the project to the principals.

Will there be financing?

While city officials say the building is now clean, the structure's future is still uncertain.

The News has previously reported that the project initially relied on money from China using the U.S. government's EB-5 visa program. That program allows foreigners to apply for permanent residence if they invest $500,000 to $1 million in a qualified commercial development project that creates or preserves at least 10 full-time jobs.

Two sources said that FBI agents also asked questions about where the foreign investment money was coming from. FBI spokeswoman Maureen Dempsey said she could not confirm or deny if the bureau's Buffalo office was or is conducting an investigation.

Landco is now focusing its attention on securing traditional bank financing and historic tax credit investors, according to three sources familiar with the project.

That process is almost complete, as the sources say Landco is nearing agreement with both a bank and a national investor. That was aided when Landco recently hired a veteran local development firm – Savarino Companies – as construction manager for the project, providing comfort to the lender and investor.