Jazzboline is the main restaurant for the Amherst Hospitality Campus hotel complex, located near the Main Street exit of Interstate 290. It fills the traveler-feeding role of the Howard Johnson's of yesteryear. There’s no clam strips, but the boffo décor feels throwback in a good way.

Walk by copper-colored panels inset with Art Deco-ish scenes, and the handsome bar room beckons with chairs in dove-colored crushed velvet and what looks like sun-faded Oriental carpet.

Beyond that is the dining room, where the kitchen staff toils, terrarium-like, behind glass. Newfangled notions are in play too, like the flatscreens set into the stone wall behind the bar, and menus that come in the form of electronic tablets.

Noting the sophisticated surroundings, one guest asked, “Is this where the Real Housewives of Amherst dish over cocktails?” 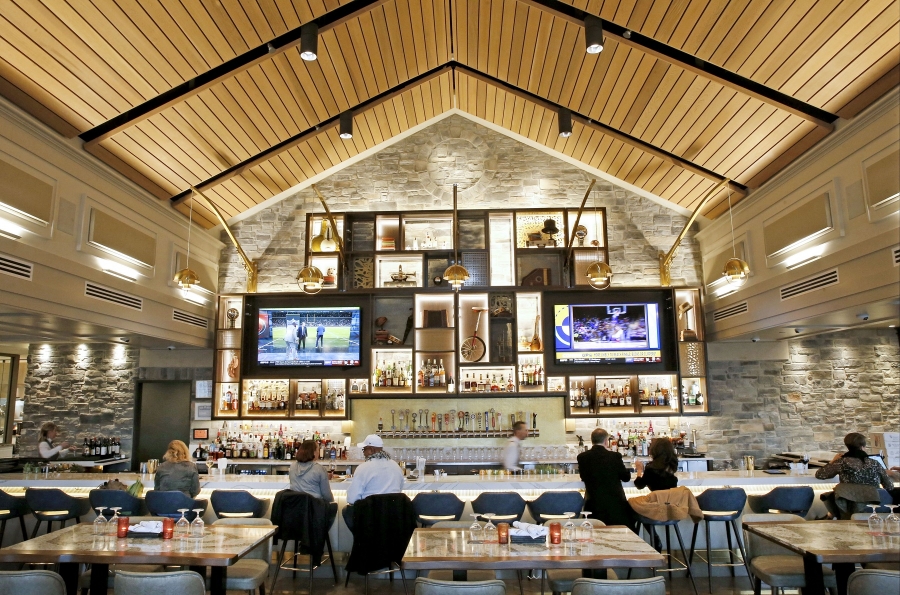 The digital menus drew mixed responses. Color photos of dishes are welcome, but not putting prices on the list of dishes meant you had to click through to see the cost of each.

Goat horn peppers aren’t lava-hot, but they certainly upped the capsaicin quotient of fried calamari ($14) tossed with the chiles, which had also been battered and fried. Garlicky, creamy citrus sauce made dipping desirable.

Chicken and corn chowder ($7) was comforting, creamy broth chock-full of chicken chunks, potatoes, carrots and corn. Topped with french-fried onions, this was a bowl to hunker down with in a snowstorm, with a pint of porter close to hand. 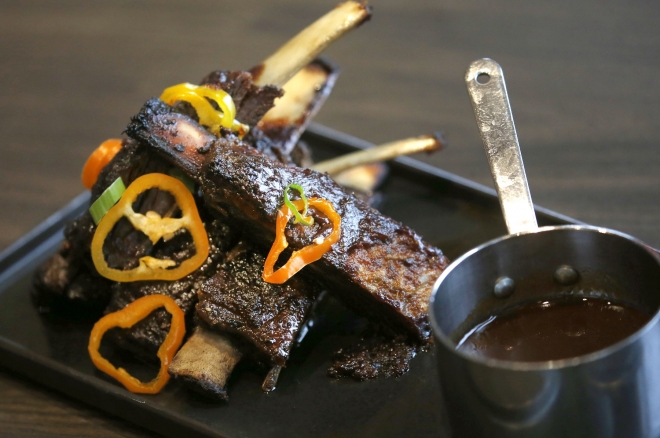 Lamb ribs are rarely seen in these parts, but they take well to barbecuing. A half-rack portion ($16) offered rich, tender meat that didn’t need the tarry barbecue sauce served on the side.

Lobster sliders ($18) brought murmurs of satisfaction with sweet chopped crustacean folded with a properly restrained amount of tarragon mayonnaise and celery leaf. Served on brioche-like buns, they were a light, delicate reminder of the sea.

A 14-ounce N.Y strip ($46) was cooked accurately, arriving with a robust crust under thick, sticky red wine demiglace. Asparagus was delightfully tender-crisp, but the heartily cheesy risotto had the al dente cooked out of it.

Vegetarian lasagna ($18) was a surprise hit, pasta and cheese layered with vegetables in a bright tomato sauce, sparked with summery sensations from a pestolike pistou. 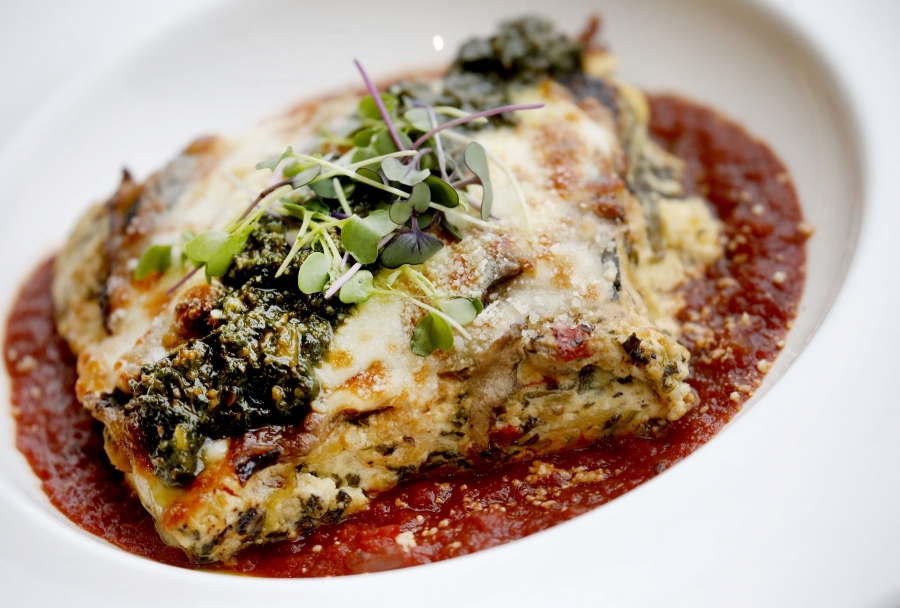 Tenderloin, pulled pork and sliced spice-crusted belly arrived on the pork platter, with baked apples and mustard. Crusted, yet rosy-hearted and tender, the tenderloin satisfied. Pulled pork had started to fall into threads, but the hearty slices of belly were the right kind of tender.

Apples were crunchy, potatoes were pleasantly crusty, the brussels sprouts more steamed than caramelized. It would serve a family of two, or a larger group ordering other dishes. 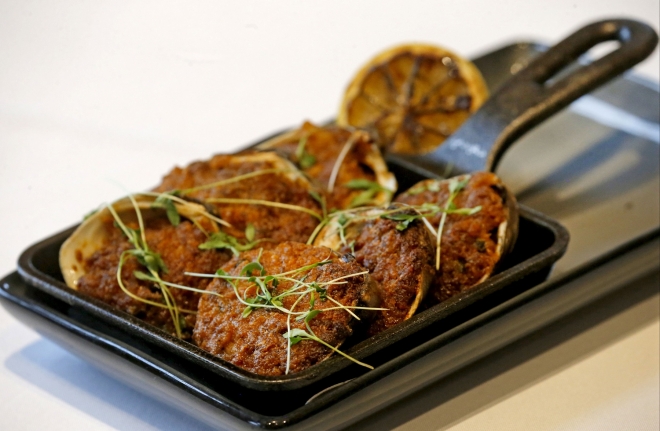 The seafood family dish brought a split lobster tail, fat scallops and thumb-sized shrimp in a briny broth dosed with Old Bay seasoning. The seafood was fresh and inviting, though not everyone would agree it was of family-scale quantities.

Flurries of jazz made it difficult to hear companions at times, but at least the sound on the televisions was down as they showed the Sabres game.

The menu showed an attractive strawberry-rhubarb crumble that was gone, and we accepted the substitution of apple crumble ($12). The cast-iron pan arrived piping hot, with apple filling and no crumble. Since contrast between fruit and topping is rather the point of the dish, this was disappointing. 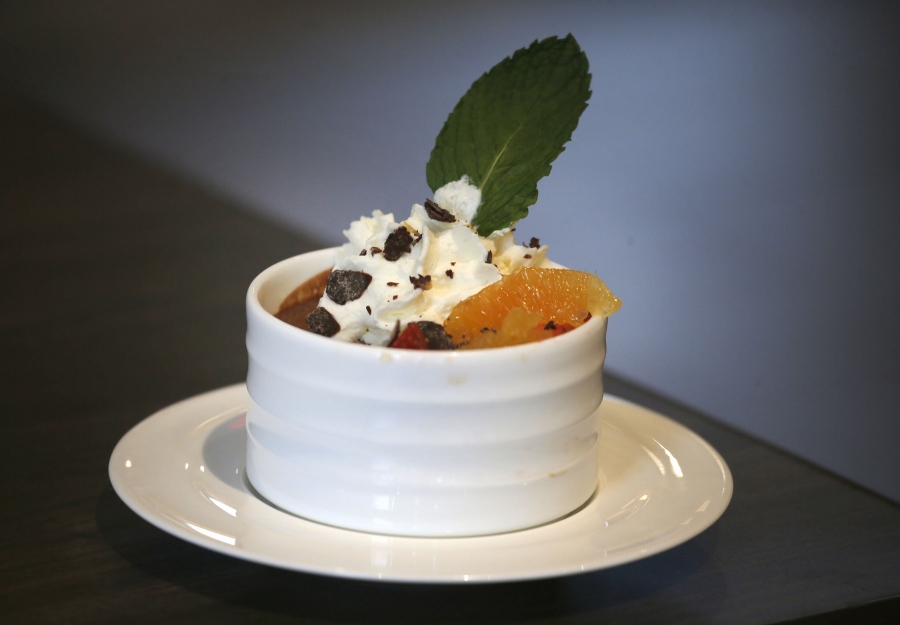 Then we tucked into NY style cheesecake ($10), which turned out to be vibrantly lemony custard poured into another cast iron pan. The reaction between lemon and iron gave the filling a distinct metallic taste. Our table left three-quarters of it behind, and our server asked no questions.

A plate of roasted Mission figs ($9) brought pleasantly ripe fruit that had barely been warmed, much less softened or transformed by fire. Accents of whiskey caramel and honey mascarpone cheese added layers of flavor to the proceedings.

It will take more consistency to rival the best restaurants at this level of ambition and price point. But Jazzboline’s far-ranging menu makes it more vivacious than other hotel restaurants. I’d take that calamari over clam strips any day.

Atmosphere: a cosmopolitan roar at peak. 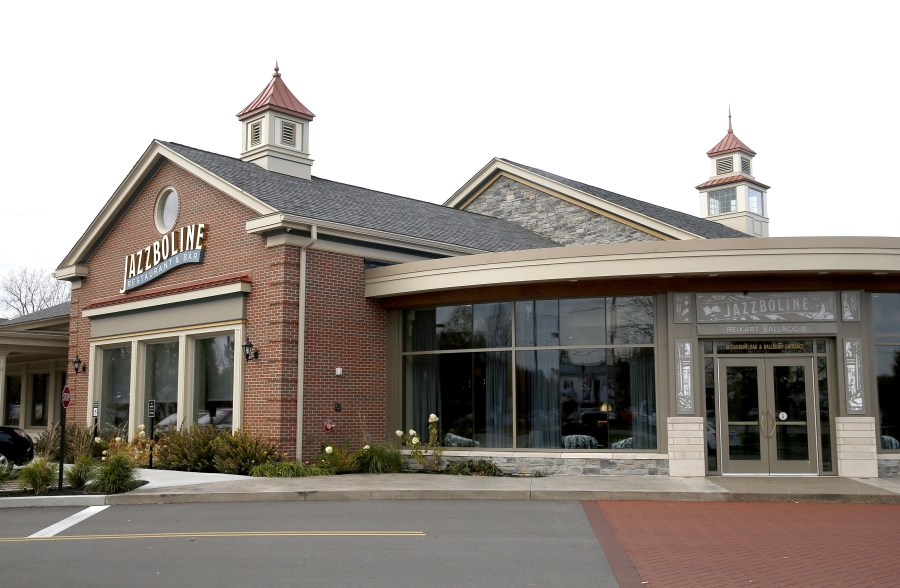