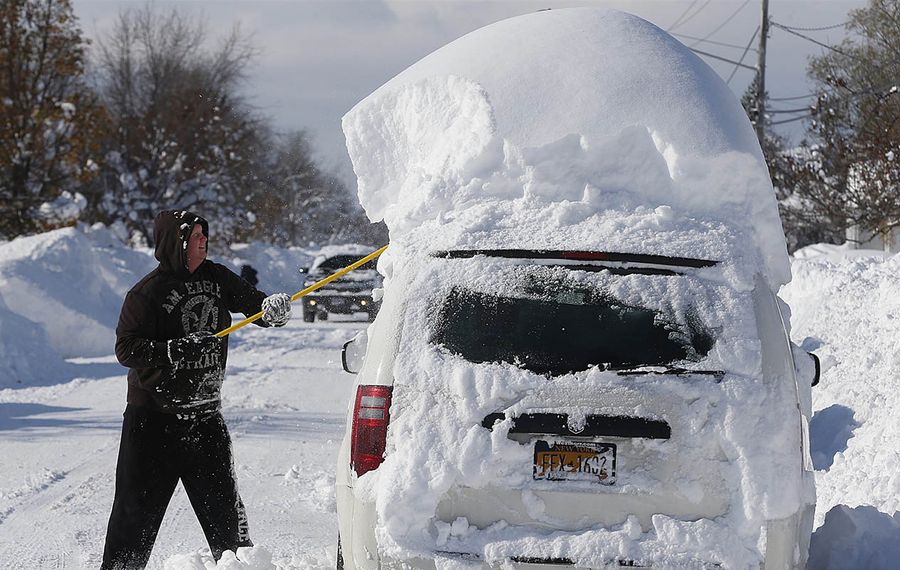 The snowbound residents and motorists of Western New York were in need of help on Wednesday, Nov. 19, 2014, after a storm dumped 5 feet of snow over a swath of the region. They needed food. They needed their streets plowed. They needed to clear their roofs. Some needed to be rescued from their stranded vehicles, while some needed to find their vehicles.

What they didn’t need was more snow. But that’s what they got.

The snow band finally shifted, giving Northtowns residents a brief taste of what their neighbors to the south had encountered. The sun even came out for a while.

Call it the calm between the storms.

Round Two of lake-effect snow hit with less ferocity than Round One, dropping 2 more feet on some the most affected parts of the region, while continuing to barely touch the rest. For even the most winter-hardened, it had an “Are you kidding me?” quality.

Driving bans were still in effect and the Thruway was still closed for more than 100 miles, but the thought of driving anywhere was a pipe dream for people who could not find a way out of their homes. Some reported climbing through windows only to encounter snow so deep they could not take a step.

The snow began having an effect – several buildings and a warehouse in Cheektowaga collapsed under the weight. And the death toll continued to climb: By the end of Wednesday, it was seven, most attributed to shoveling or plowing.

Gov. Andrew M. Cuomo began what would become a weeklong presence in the area as he helped direct snow removal efforts. During one of his many news briefings, he called the storm “an extraordinarily difficult situation.”

For the thousands of people wondering if their houses were going to fall on top of them before they had a chance to escape, that may have been the understatement of the year.

• Snowstorm brings out the best in Buffalonians: Stories from the storm

• Across Erie County, plow crews are challenged by snow, irritated by abandoned cars

• Many stranded motorists on Thruway not happy about being abandoned

• To surprise of truckers stuck on Thruway, Cuomo goes ‘door-to-door’

Inside The News: Reporters and photographers shared what it was like to live through the storm when you also had to cover it.