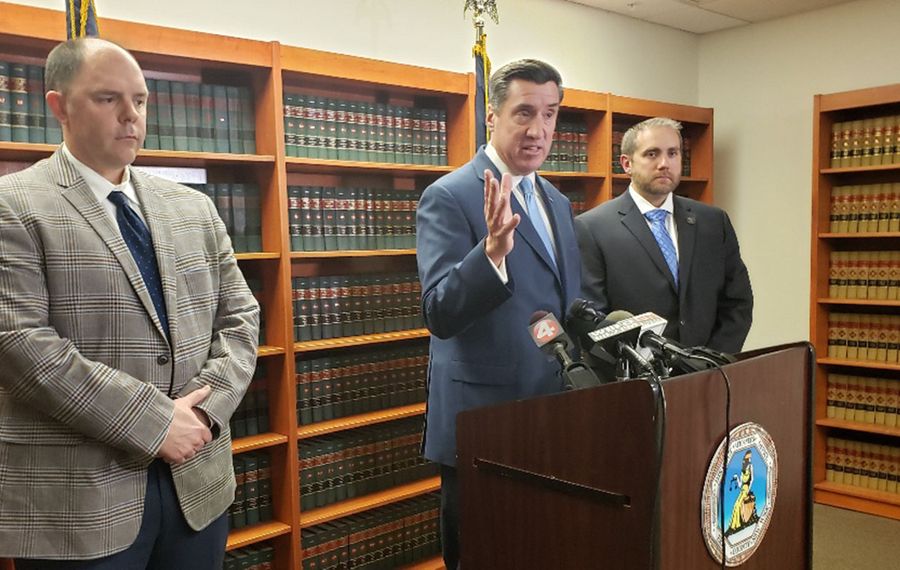 Erie County District Attorney John J. Flynn Tuesday issued a warning to those who attempt to either intimidate or tamper with one of his witnesses that they will be prosecuted to the fullest extent of the law.

Flynn issued the warning at a news conference following the arraignment of 28-year-old Dayquain Trent on an indictment charging Trent with attempted murder, assault, tampering with a witness and criminal possession of a weapon, all felony charges.

Flynn said the genesis of the case goes to an August 2018 party, on Hagen Street, where two factions became involved in a confrontation.

"One of the parties in that confrontation went back and told one of their relatives about the confrontation," Flynn said. "The relative, whose name was Lemuele Jackson, who then shows up on Hagen Street. He was directed to the group of individuals, who were standing near a porch on Hagen Street."

The confrontation escalated when Jackson allegedly pulled out a gun, shot at the group on the porch and wound up fatally wounding a female bystander, in addition to a second victim, who survived, Flynn said.

Jackson was charged, prosecuted and found guilty of second-degree murder, reckless endangerment and criminal possession of a weapon, Flynn added.

During the trial, an eyewitness to the Hagen Street shooting, scheduled to testify against Jackson, was allegedly shot in the left forearm about three hours prior to taking the stand on Oct. 22, according to Flynn.

The witness was taken to Erie County Medical Center, where he was treated and his arm put in a sling, enabling him to testify anyway, Flynn said.

"Obviously, when I found out my witness was shot three hours before he was supposed to come in and testify, I was concerned, to say the least, and, with the outstanding work of the Buffalo Police Department, we endeavored to find out who shot him. Who was trying to tamper with one of my witnesses?" Flynn said.

A police investigation determined that Trent allegedly was the gunman, Flynn said.

"We did not arrest Mr. Trent. We just put this case directly in the grand jury and that indictment was opened up this afternoon, and he was arraigned on the charges," Flynn said.

The gun allegedly used to shoot the witness was found when police officers executed a search warrant Nov. 5, after which Trent was arrested on the weapons charge, the district attorney said.

Trent "was not arrested at that time for the shooting, witness tampering and attempted murder," Flynn said.

Following his arraignment, Trent was ordered by State Supreme Court Justice Paul B. Wojtaszek to be held without bail.

During the news conference, at which he was accompanied by Buffalo Police Capt. Jeff Rinaldo and Assistant District Attorney John P. Gerken, Flynn said his office offers a range of protections for witnesses who fear for their safety.

"I can move you, if you want to move. I can get you another cellphone, so that people don't know your cellphone number," Flynn said. "Unfortunately, this isn't 'Goodfellas.' I can't move you to Arizona. I'm not the federal Witness Protection Program."

Rinaldo called the wounded victim in the case a hero.

"This is an individual that was subjected to an extreme act of violence, but they still believed in what they were doing," Rinaldo alleged.