Fresh off an impressive rookie campaign that saw a third-place finish in the 2018-19 Calder Trophy race, defenseman Rasmus Dahlin was faced with sky-high expectations for Year 2.

And yet 20 games into the season, Dahlin has curiously taken a step backward. In Dahlin’s defense, some of this surely has to do with how high of a bar he set from his rookie year, and everyone around him – myself included – creating a linear forecast of his growth and development as a player. If Year 1 was that impressive, just how impressive would Year 2 be?

But player development isn’t linear. Under a new coaching staff with a somewhat overhauled roster, Dahlin has had a substantially smaller impact on his team’s performance. And that’s true across the board across all game states.

Consider Evolving Hockey’s Goals Above Replacement model – a regression-based model that determines individual player contributions and subsequently grades those contributions relative to a replacement level player – for a quick point of reference. Last season, Dahlin was a majorly positive impact across the board. This year, the opposite has been true: 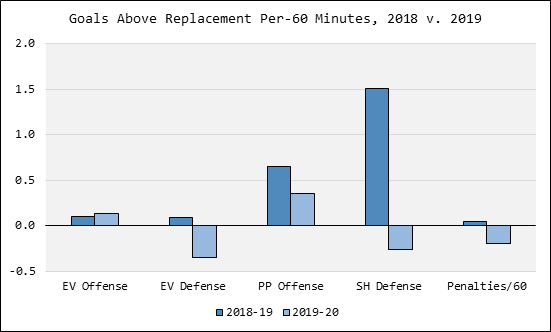 It is more than plausible that the opening 20 games will end up being a blip on the radar – a stretch of games for a young player that washes away with time as he blends into Ralph Krueger’s team. But the overarching point here is that Buffalo’s on-ice results with Dahlin have simply been bad, and that Dahlin’s teammates are seeing adverse performance with Dahlin on the ice relative to other defenders on the roster.

The coaching staff has taken note to some degree. By now, you have noticed that Dahlin’s ice time has been drawn down emphatically. He’s fourth in ice time per game across all situations among Buffalo defenders, trailing Rasmus Ristolainen, Jake McCabe and Brandon Montour (in limited action). You would have expected some displacement of Dahlin’s minutes from last year with how much overhauling was done on the blue line in the offseason, but he’s more than two minutes down in usage from his rookie season. That’s not insignificant.

So what changed? One of the first things I like to look at concerns common teammates, especially if there is an obvious change in performance with nothing obvious underpinning it. Here’s Dahlin in 2018, and again in 2019:

There isn’t anything obvious when it comes to the forwards playing in front of Dahlin – it’s generally a mix of top-nine forwards and the balance of ice time is collinear with a coaching strategy of playing three lines with a relatively comparable rate of usage on a game-by-game basis.

Defense is a different story: Dahlin played extensive minutes with Zach Bogosian last year (and to a much limited extent Ristolainen), this year has seen him paired with Colin Miller and Montour.

In a vacuum, that doesn’t make much sense. Miller and Montour at this stage of their respective careers are better even-strength contributors than Bogosian, and to that end it would seem that the pairmate situation has actually improved year-over-year for Dahlin.

Either way, we know Dahlin is struggling with one or both of Miller or Montour. Let’s look at each pairing’s performance year to date on a rate basis, this data relative to what Dahlin did with Bogosian. It’ll help isolate on whether the issues are in the offensive third, the defensive third, or all over the ice:

The fascinating piece from this data is it’s indicative of a pretty seismic territorial shift year-over-year. Dahlin’s offensive numbers are down across the board, and his defensive numbers are down, too – although less so relative to the offensive numbers. These are, of course, interrelated. The less time a team is spending in the offensive zone, the more time it is spent either trying to transition the ice or defending against the run of play in the neutral or defensive zones. Dahlin’s units are simply spending less time in the attacking zone, and consequently, the underlying numbers have become disadvantageous to Buffalo with him on the ice.

So, why are Dahlin’s units struggling to sustain the offensive zone? That’s the million-dollar question and requiring more exhaustive video review to troubleshoot potential areas of deficiency.

One issue I have observed in an initial video sampling review? The Sabres are having a curiously difficult time gaining the offensive blue line with Dahlin on the ice. That’s counterintuitive to Dahlin’s skill set – a wondrous skater and passer who creates just as many opportunities for his teammates as he does himself, especially with the puck on his stick.

But Buffalo’s inability to generate meaningful offense with him on the ice is the biggest reason why his numbers have cratered a bit, and it’s one of the reasons why the coaching staff has become marginally more hesitant to use him relative to other options.

Because it’s 20 games, we are absolutely still in wait-and-see mode. Krueger will continue tinkering with different matchups and pairings, and we cannot rule out the possibility that this is just a brief "sophomore slump" that a young player will invariably get through.

Still, Dahlin not being the same player he was last season – at least so far – is one of the big reasons why the Sabres haven’t been able to get much daylight in the standings. And that’s a cause for concern, even if just for the 2019-20 season.