The journey home from school for Morzina Sarker is a walk that’s just shy of 1.5 miles and fraught with urban sand traps and pitfalls along the way.

Up Bailey Avenue, sometimes under the cover of darkness.

Past the barber shop and the catcalls from young men on the corner.

Past the liquor store, where last year she happened upon the scene of a shooting.

“In the winter, I get a lot more nervous because it gets darker more quickly after school,” said Morzina, 17, as she walked home on a recent day. “My mom, she’ll call me to make sure I’m on my way. Sometimes I stay on the phone with her to make sure I get home safely.”

Long a concern among parents, the walk to school for hundreds of students like Morzina has once again become a topic of conversation in Buffalo, where the district gives Metro bus and rail passes to high school students only if they live 1.5 miles or more from school, per state policy. Yellow buses are provided for elementary and middle school students more than .7 miles away.

A bill, however, is percolating in the State Legislature that would provide aid in Buffalo – as well as Rochester, Syracuse and Yonkers – for students residing a half-mile or more from school in cases the State Education Department deems a safety concern. The state reimburses districts 86% of the cost for transportation.

“I think there’s a renewed interest in most of our cities because of the circumstances that exist and the fact the superintendents and boards are taking a closer look at what families are requesting and what children need,” said Jennifer Pyle, executive director for the Conference of Big 5 School Districts, which represents the school systems in the state’s five largest cities.

The Big 5 is expected to push the issue when the new legislative session begins in January. In fact, Buffalo asked the organization to put the issue on its agenda, not only due to safety concerns, but to provide walkers relief from Buffalo’s winter weather.

“Frankly,” Pyle said, “our view is it’s just not safe in some areas for children to walk to and from school for a variety of reasons, and school districts would like to be able to offer parents this opportunity.”

Morzina, a senior at Olmsted 156 on Suffolk Street, lives in the University District. Her house is just shy of 1.5 miles from school.

Her father lobbied the district for a bus pass during her freshman and sophomore years, but to no avail. The walk back and forth to school was intimidating for her at first, but Morzina has grown accustomed to the routine and described the neighborhood she passes through as “OK.”

“There are certain areas where you have to be more careful,” she said.

Over at Buffalo Academy for Visual and Performing Arts on Masten Avenue, Elizabeth Rouse is in the same situation with her stepdaughter, who is a freshman. They, too, live just under 1.5 miles from their school, making Elizabeth ineligible for a bus pass.

“I just don’t feel safe with her walking by herself,” Rouse said. “She might get caught up in the shootings that go on. When the snow comes, she has to walk in the street. Anything can happen.”

In fact, over at Burgard High School on Kensington Avenue, Andrell Montgomery almost quit school over the whole issue.

Andrell, a junior, had been granted a bus pass in years past because of his asthma, but the family said they were getting the runaround from the district this year.

He became so frustrated, Andrell decided to drop out of school and get a general equivalency diploma until Principal Charlene Watson stepped in to help get him the bus pass. 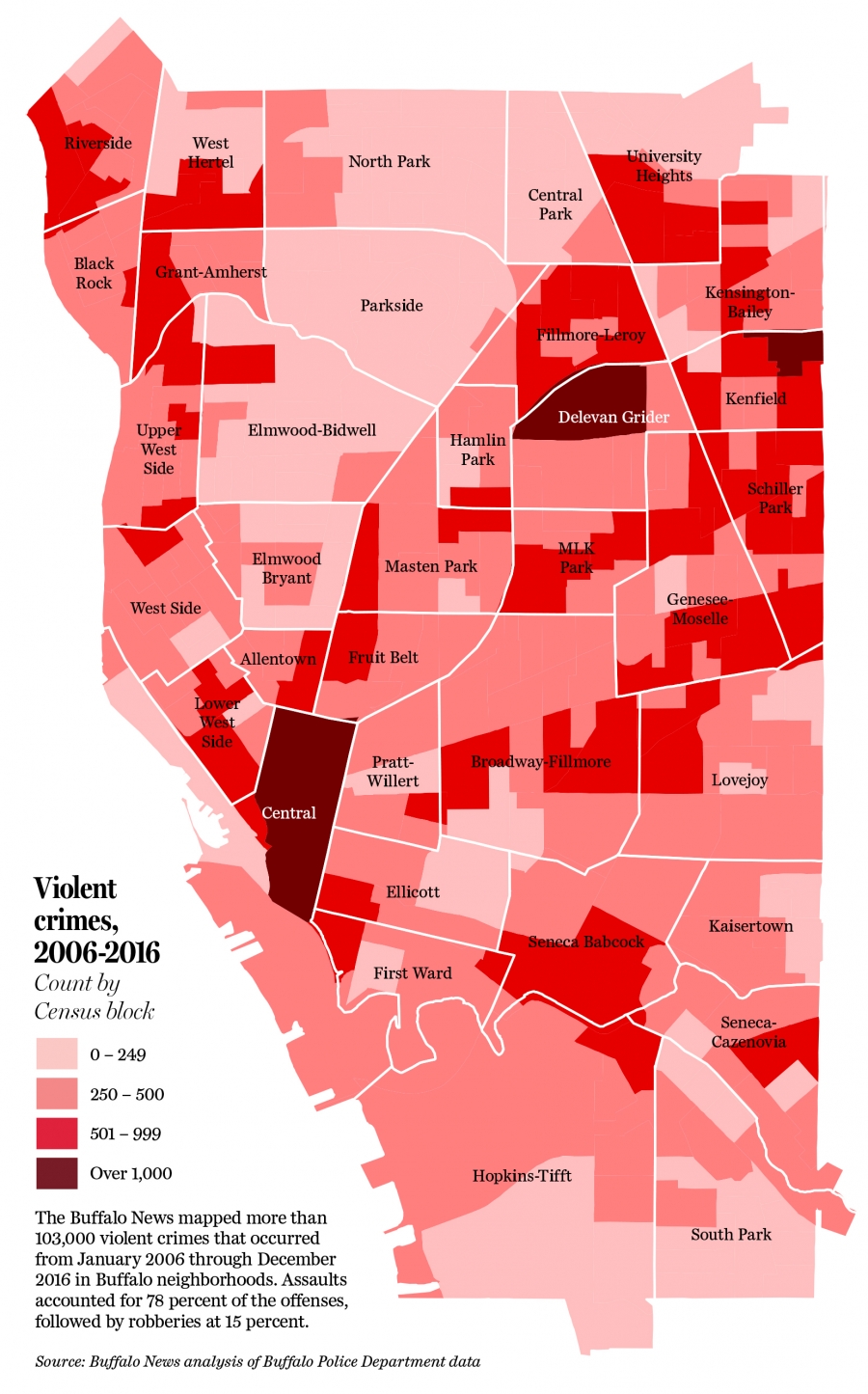 More than 4,450 students in Buffalo walked to district, charter or private schools during the 2017-18 school year, according to data provided by the Buffalo Public Schools.

Some 970 students in district high schools live between a mile and 1.5 miles from their school and the district estimates it would cost the school system an additional $577,000 a year to provide transportation for them, said Darren Brown-Hall, chief of staff.

Central District School Board Member Paulette Woods said the district needs to at least set aside a pot of money to help students get transportation, maybe at a reduced cost, until this issue can be settled at the state level.

"It’s something we bring up at least once a year,” said School Board President Sharon Belton-Cottman.

“If you look at the attendance rates in our most neediest schools you will see on the very cold days they’re not coming to school,” Belton-Cottman said.

Why would you have a policy that keeps them away? You already have a free lunch program. Why not provide the similar option for children to take the bus in high-crime areas?”

It’s after 3 p.m. on a school day, and Morzina is bundled in a parka to protect herself from an early dose of winter that has covered the sidewalks with ice and snow and slowed her walk home.

She stopped to point out a barber shop on the corner, where she usually encounters the young men who call out to her.

“They’re very persistent,” Morzina said. “They won’t leave you alone unless you say something to them or talk to them. Usually, I have my headphones on so I ignore them, but they’ll follow me. Sometimes I have to make sure I take different routes, so they won’t follow me home.”

Bailey Avenue, filled with cars and storefronts, is bustling with activity during the afternoon, a contrast from her morning walk when it can be eerily quiet as the city still wakes.

On this day, Morzina is accompanied by her friend Maimuna Mannan, who lives a couple blocks away from Morzina, but still far enough from school that she receives a bus pass. More often than not, she tends to walk with Morzina to make sure she gets home safe.

The two recalled the day on their way home from school when they came upon a shooting outside a liquor store. The scene was cordoned off, the victim outside on the ground and police and paramedics on the scene.

“I think they need to evaluate the factors that play into determining the distance,” Morzina said. “It needs to be about the neighborhood – and safety hazards.”

Thirty minutes into her journey, Morzina reached her destination.

As she and Maimuna parted ways, Morzina stood in front of her house and pointed out where two friends live – one across the street, another several houses down – both of whom are over the 1.5-mile limit and get a bus pass.

Morzina, on the other hand, comes up about 500 feet short.