The Queen City Landing proposal on Buffalo's waterfront is back.

Developer Gerald Buchheit has redesigned his project to bring an apartment tower to the Outer Harbor, reducing its height to 20 stories and moving it farther from the water's edge.

That's designed to make more efficient use of the space, while reinforcing his commitment to a project that has drawn repeated resistance and litigation from environmentalists and other opponents. The projected cost has increased from $60 million to $100 million.

"He is as passionate and committed to this project as ever," said Phil Pantano, spokesman for Buchheit, who was out of town and not available for comment. "He wants to see it through."

The new design has roughly the same number of apartments, plus two restaurants, structured parking, green space and public access to the water. But it squeezes the apartments into fewer floors while incorporating four levels of parking into the base of the tower instead of a separate structure. That allowed them to pull the tower away from the water's edge, addressing one longstanding concern of environmentalists.

Even so, the reduction from 23 stories to 20 is unlikely to mitigate concerns of the project's critics, who remain dedicated to stopping what environmental attorney Arthur Giacalone called a "vanity project" that remains "as aesthetically unpleasing and inappropriate in scale and character as the former project."

"Obviously, I have not seen the plans and details yet, but this fourth proposal appears to be as questionable for siting on the Outer Harbor ... as the prior tower proposal," Giacalone wrote in an email to The Buffalo News, citing the location's "proximity to sensitive ecological sites" and its "location in an internationally significant bird migratory corridor."

"I plan to vigorously oppose this latest iteration," added the attorney, who lost prior rulings in his earlier litigation on behalf of three local citizens seeking to block the project. 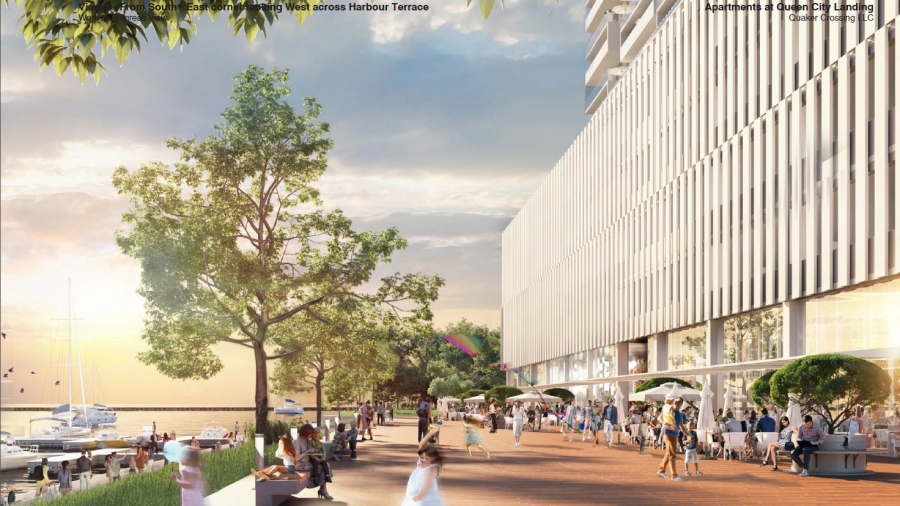 Buchheit submitted the new plans for his project to the city Wednesday, and expects to bring it to the city Planning Board for formal review in December. If approved, Pantano said Buchheit hopes to start construction in the spring and finish by late 2021.

“We look forward to having a chance to review the new project proposal in detail to evaluate if or how any of our previous concerns are addressed with the new site design,” said Jill Jedlicka, executive director of Buffalo Niagara Waterkeeper.

Buchheit – who owns Accent Stripe, an Orchard Park-based highway painting company – has a history of redevelopment ventures. He built the Quaker Crossing retail center in Orchard Park and owned the Statler Towers in downtown Buffalo for 15 years before turning his attention to the waterfront. He purchased the Freezer Queen property for $3 million at a court-ordered foreclosure auction in late 2007.

The frozen-food production plant and warehouse closed in 2006. Buchheit has floated several proposals for the site, including converting to condos and later as a mixed-use commercial development with a hotel, office and retail space. Those plans fell through.

In 2015, he unveiled a $40 million to $60 million remake of the vacant facility into 120 apartments. That plan was shelved after approval because of structural concerns about the building and its basement, prompting a new plan in early 2016 for a 23-story apartment tower.

The Freezer Queen building later was demolished and the site was cleaned and cleared.

Construction has been delayed as lawsuits over the project's approvals moved through the court system.

The plaintiffs challenged actions by the Planning Board and Common Council, particularly the environmental review process, calling them flawed and urging the court to overturn them. They asserted that the project would harm the environment, but courts repeatedly found the city had acted appropriately and within its authority.

The possibility of further court action hindered Buchheit's ability to get financing and proceed with the project, Pantano said. In the meantime, though, he brought in new architects – Toronto's Diamond Schmitt Architects – and revised the plan.

"For the past two years, Jerry was handcuffed with a project that he couldn’t build," Pantano said. "He couldn’t move forward because of outside influences. He utilized that time, aside from completing the remediation at the site, to really review and refine his vision and plan for the project."

The new version would have 206 apartments, with 102 one-bedroom, 92 two-bedroom and 12 three-bedroom units, ranging in size from 860 square feet to 2,134 square feet. It would also be a combination of market-rate rentals and condominiums, although details and pricing are still in flux. 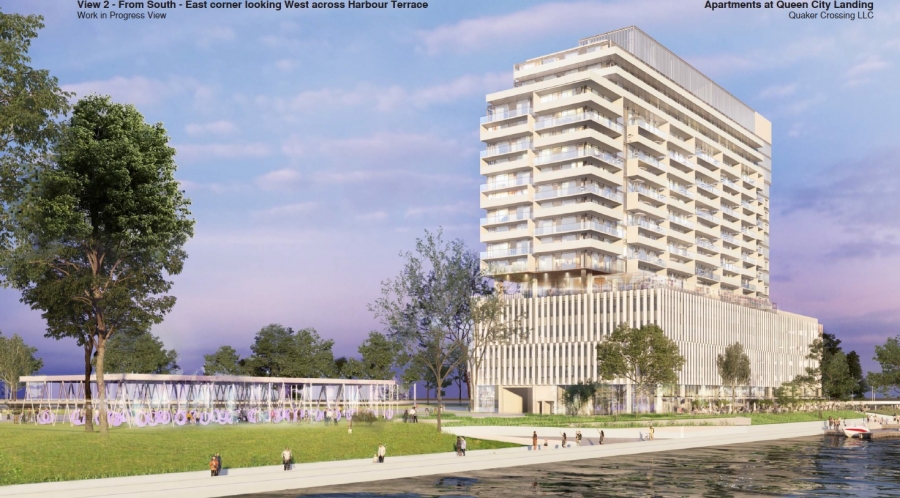 The 470,444-square-foot project would include two restaurants – one on the ground floor, alongside 9,455 square feet of retail space and a galleria, and the other on the sixth floor, as part of a 18,426-square-foot event and banquet facility.

"To have the view that you'll be able to enjoy from that vantage point is going to be something that will be a true selling point and something that people will really be enamored with," Pantano said of plans for the sixth-floor event space.

The prior plan included a rooftop pool, but that has been replaced with an outdoor terrace and an indoor gathering space for residents. Units on the south and west sides, facing the water, would have outdoor terraces.

The new design includes 350 spaces of covered parking built into the tower, on the second through fifth floors, plus another 220 surface spaces. The apartments would occupy floors seven through 20.

The complex would now occupy 30% less land, and is situated 80 feet from the water, opening up more green space and public access than was included in the prior plan, Pantano noted. Extra amenities under consideration could include 30 transient boat slips that can be removed at the end of each season, as well as a solar-powered swingset, public walking and bicycle paths and other recreational features "that will let everybody enjoy the space."

"The previous version of this same project was approved and thoroughly defended in previous proceedings," Pantano said. "This is really just taking a project that was approved and refining it in a way that further addresses some of the problems that were raised in the previous discussions."

Not so, said Lynda Schneekloth, advocacy chair for the Western New York Environmental Alliance and part of the Our Outer Harbor Coalition. In particular, she said the revision doesn't change core principles that the Lake Erie shoreline should be completely public and that all projects should be tied to the water,. She also noted that the project would "put people in harm's way as the impacts of climate continue to get worse," citing "three destructive Lake Erie seiches" that damaged the area.

"I do not see that the revised proposal actually addresses any of the issues that precipitated our initial objections to this project," she said. "Putting private residential high end units does not meet these principles... The public should not be expected to pay for damages and protection when the wisdom of today says we should not locate housing on vulnerable and exposed waterfront sites."