Fossil-fueled power plants cause pollution and climate problems, true enough, but they are generally a reliable source of energy generation on a large scale. One of the most productive steps in slowing climate change that we and the rest of the world must take would be to wean ourselves from our dependence on these primary sources of carbon dioxide emissions. Without that step, it appears the rapid warming of the mean world climate will continue, exceeding the temperature threshold that would somewhat mitigate the worst impacts of climate change as the century progresses.

While the smaller-scale renewable technologies are on the rise, particularly wind and solar, they have a long way to go in achieving the needed drastic reduction in the use of fossil fuels. Wind turbine farms are multiplying and now produce between 6%-8% of the nation’s power.

Some states have taken greater advantage of wind energy potential than others. Iowa reports they now generate 40% of their energy from wind turbine farms.

Many laypersons, including some political leaders, have been speaking out about reliability questions of these technologies because of their dependence on weather for efficiency. Some have joked or even warned of lights and televisions switching off at times due to the lack of wind or enough sunshine. Such a fear on the surface is understandable. In places receiving significant output from wind turbines and solar, there are conventional power plants already in the grid that take up any slack in nature’s contribution. But such a co-dependency raises the question: Do we have to indefinitely keep lots of fossil fuel-burning plants on line to maintain the consistency of grid capacity?

The answer is probably not for too much longer. Something called virtual power plants are in the works, and will be multiplying. Virtual power plants consist of multiple technologies, energy storage systems and delivery systems to keep the grid balanced and running with the eventual goal for replacement of fossil-fuel plants: 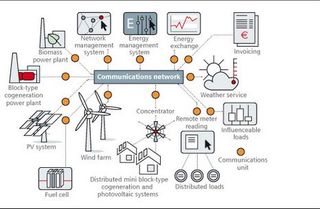 The basic definition, from a website called Microgrid Knowledge, is:  “A virtual power plant works remotely to combine a number of independent energy resources from disparate locations into a network that provides reliable power 24 hours a day. Relatively new on the energy scene, the plants employ software-based technology that relies on the smart grid. They utilize planning, scheduling, and bidding of distributed energy resources (DER) to create the network that provides this reliable power.”

The smart grid relies on multiple renewable sources and technologies combined into a network with large-scale battery storage systems to dole out power when wind or sunshine are in a lull. The network can be a microgrid for a small sector of residences and businesses or it can be a larger virtual power plant. The network provides power from close-in sources, reducing energy loss during transmission. It enables customers to automatically alternate sources as well as to provide a channel for excess energy to go back into the grid for other customers. This kind of flexibility, as some of you know, already exists within the grid and some utilities on a smaller scale. A collection of technologies in the virtual power plants can achieve the kind of capacities and reliability that will gradually lessen and remove the necessity for conventional power plants: 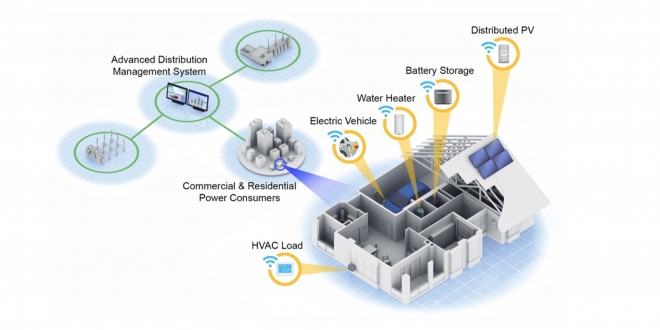 This bidirectional power transmission model has had success in smaller-scale microgrid virtual plants. For example, Green Mountain Power in Vermont created a virtual power plant with storage batteries in 500 residences, achieving a $500,000 savings in a one-hour period during peak demand. In Europe, mainly Germany, a utility created a mega-capacity virtual plant that serves 5,000 energy producing and consuming units, with a 4,100 megawatt capacity. Plans are going forward in California and Michigan to move ahead toward eventual large increases in such technologies, to reduce costs and reliance on fossil fuels.

With all of this progress, we're still not yet on the precipice of a panacea. There are remaining obstacles to rapid expansion in these more efficient and cleaner systems. Concerns exist such aggregates can be vulnerable to cyber attack. As it is, we already have very serious concerns about such attacks upon our conventional grid. Tests have already shown some of our weak spots in existing grids to theoretical attacks from Russia, North Korea, and perhaps China. Another obstacle is the need for more engineering, required to protect systems and lines from possibly damaging voltage surges and drop-offs between microgrid aggregates. Finally, companies both in Europe and especially in the United States need more regulatory changes to make conversions to virtual power plants more financially attractive for the utilities.

None of these obstacles appear insurmountable. A Japanese project is already under design and construction to be the largest virtual plant thus far, and Siemens in Germany is enlarging scale in its designs. Microgrid Knowledge reports these plants can greatly reduce the power imbalances that sometime occur on very short notice during peak demand periods in existing grids: “If an imbalance occurs, the transmission system operator might call on a virtual power plant to quickly boost or decrease output, often in real time. For example, in Germany a network of more than 1,000 biogas, solar, wind and water plants are located across four of Germany’s transmission grids. Together, as a virtual power plant, these resources provide up to 796 MW of clean energy that boosts grid stability.”

This fast-track flexibility is going to eventually prove all but irresistible in planning for future power generation while reducing fossil-fuel loads and lowering costs for energy providers and users. For now, the time scale for all this progress remains uncertain. In the meantime, the benefits for both consumers and utilities continue to become more apparent with each successful project and application.