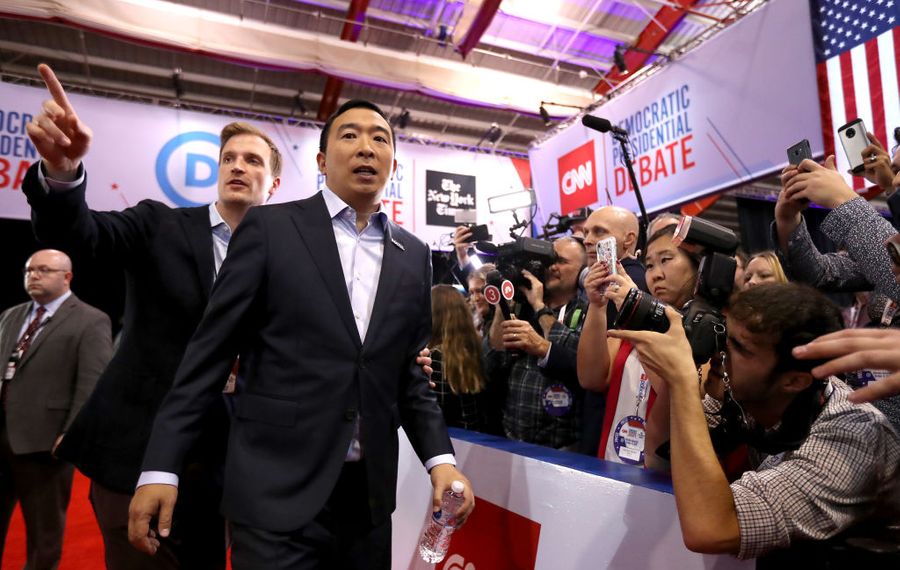 Andrew Yang and his campaign manager plopped themselves down before microphones at campaign headquarters late last month for a 10-hour online chat with the "Yang Gang" and those that the upstart presidential candidate calls "the Yang curious."

About 90 minutes in, Yang's campaign manager turned the topic to, of all things, pro football – and his beloved Buffalo Bills.

"Now, I have hatred for Patriots," Zach Graumann said. "No offense to New England, New Hampshire – we love you guys. I'm a Buffalo Bills fan. I just can't do it."

Yang – a New York tech entrepreneur who's campaigning hard in New Hampshire, the first primary state – quickly piled on. Yang pummeled Patriots quarterback Tom Brady for his laissez-faire attitude toward the accusation that his team deflated footballs used during a 2015 playoff game.

Welcome to this year's most idiosyncratic and surprisingly successful Democratic presidential campaign – led by a die-hard Bills fan who counts Williamsville's Maple West Elementary School among his alma maters.

Virtually unknown a year ago, Yang – a Schenectady native – has done something that neither New York Sen. Kirsten E. Gillibrand nor New York Mayor Bill de Blasio could do. With Graumann leading the way, Yang has turned a long shot campaign into one that's flush with funds and steady in the polls.

Yang's success seems tied to his dire message. He says artificial intelligence will soon leave millions unemployed and that the government ought to tax big tech enough to pay every American a $1,000-a-month "Freedom Dividend" to help them reboot in the coming technological revolution.

But Yang's campaign is anything but dire. On the trail, Yang exudes joy and good humor and hope. And with Graumann at his side at most times, Yang's effort feels not just like a freewheeling, fun-loving campaign, but also like a buddy movie.

From Maple West to the campaign trail

Several hundred people crowded the stage at the end of a recent Yang rally in Northern Virginia. The candidate shook hands and laughed and posed for photos. At his side, snapping pictures, stood a tall, athletic redhead who, at age 31, had already come a long way in life, including a stop at Maple West Elementary School in Williamsville.

It was there, at age 6, that Graumann fell in love with the Bills.

"When I lived there," Graumann said, "the Bills were in their heyday" — and he got hooked.

But in some ways, Graumann's heart never left Buffalo. He recalled difficult days in school in Connecticut, surrounded by Giants, Jets and Patriots fans, and difficult Sundays when the Bills were anything but in their glory years.

Graumann stuck by them the whole way, through his days at Duke University and on into his career on Wall Street and as the founder of an educational nonprofit. Seeing a team on the rise, he became a season ticket holder last year.

"I really think Terry Pegula and Kim Pegula are godsends for the city," Gaumann said. "I'm a big believer in building culture and building organizations and, you know, creating viable long-term success. And I believe they're doing that, so it's exciting."

Graumann is having a hard time fitting Bills games into his busy schedule this year, though. And it's all because he attended a dinner party with Yang in New York in summer 2017.

He had known Yang professionally for years, but never before had he heard Yang talk like this. Yang laid out how many jobs had been lost to automation and how many more would be. Yang said that he was going to run for president to spread that message and offer a solution.

Graumann had no political experience, but Yang named him campaign manager the next spring. Together they took to barnstorming the small towns of Iowa and New Hampshire, bonding all the way. 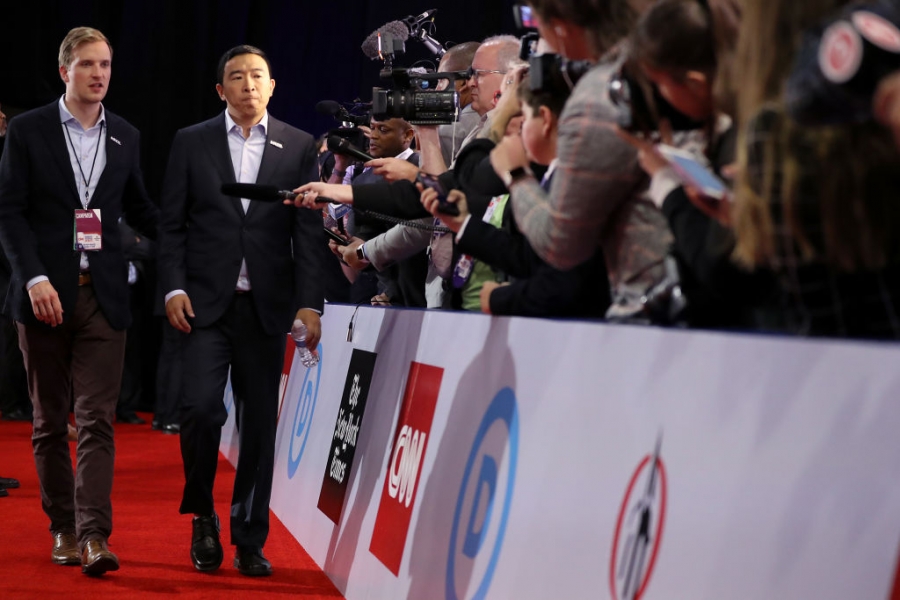 Only a few people turned out to see Yang at first, but on Nov. 4, 2,000, people showed up to hear him at George Mason University in Fairfax, Va.

After the introductory speeches, Yang duckwalked across the stage wearing a blue blazer, a star-spangled scarf and a blue baseball cap that said “MATH.” It stands for “Make America Think Harder," and, between one-liners, that's just what Yang asked the crowd to do.

"The Democrats are acting like Donald Trump is the source of all of our problems," Yang said. "He is not. He is a symptom. He's a manifestation of the fact that we're going through the greatest economic transformation in our country's history."

Yang then painted a haunting picture of an evolving America where tens of millions of jobs will be automated away.

The crowd listened. And then when Yang laid out his proposed solution – a $1,000 a month check from the government, paid every month – the place erupted.

It's not the only eruption the Yang campaign has experienced recently. His fundraising exploded in the third quarter, when he raised $10 million – three times what he raised in the previous three months. Meanwhile, he's up to 2.8% in the latest national polling average, far below the front-runners but more than 2.5 percentage points ahead of where Gillibrand and de Blasio stood when they left the race.

To hear Graumann tell it, Yang's stark warning about automation and his proposed solution explain that surprising success.

"There are a million reasons to love our guy but the biggest reason we are sticking around is because we're talking about the real problems in America and providing a new way forward," Graumann said.

Charles Sciascia, 32, of Amherst works in web design and internet marketing. He's already seeing jobs in those fields being automated away. And he thinks Yang's Freedom Dividend would help ease the economic anxiety that Trump exploited in his 2016 bid for the White House.

"Andrew Yang is the only one Trump might face who is finding solutions to solve the problems that got Trump elected in the first place," Sciascia said.

On the road together

"We find it a different but effective way to run this campaign," Graumann said.

Both Yang and Graumann talk more like startup entrepreneurs than politicos, and they have run the campaign as such, building a big base of donors online and promoting Yang's signature proposal – the Freedom Dividend – like a trendy new tech product.

"An unknown individual with an interesting rap was able to raise more money than a sitting U.S. senator and the mayor of America's largest city," said New York Democratic consultant Hank Sheinkopf. "That says a lot about the campaign manager."

But Graumann said it has more to say about Yang's message.

"The reason we are doing well, and why this is not a flash in the pan, is because we're talking about the things no one's talking about," such as increasing rates of suicide and depression and their link to the disappearance of so many American jobs, he said.

Yang pairs such talk with a detailed list of policy ideas. He proposes funding federal campaigns through "Democracy Dollars": $100 payments from the government to voters, who could spend that money on the candidates of their choice. He wants to legalize marijuana. He wants the personal data that tech companies use for profit to be seen as everyone's personal property. He even wants to do away with the penny.

Graumann will be talking more about those things, too. On that live chat, Yang said his top aide will be "spreading his wings" as a spokesman for the campaign.

Lighthearted banter of that sort spiced up all 10 hours of Yang's online chat, which turned more than once to the topic of Graumann's obsession with the Bills.

"Zach is such a die-hard Bills Mafia member," Yang observed at one point. "It's very heartwarming."