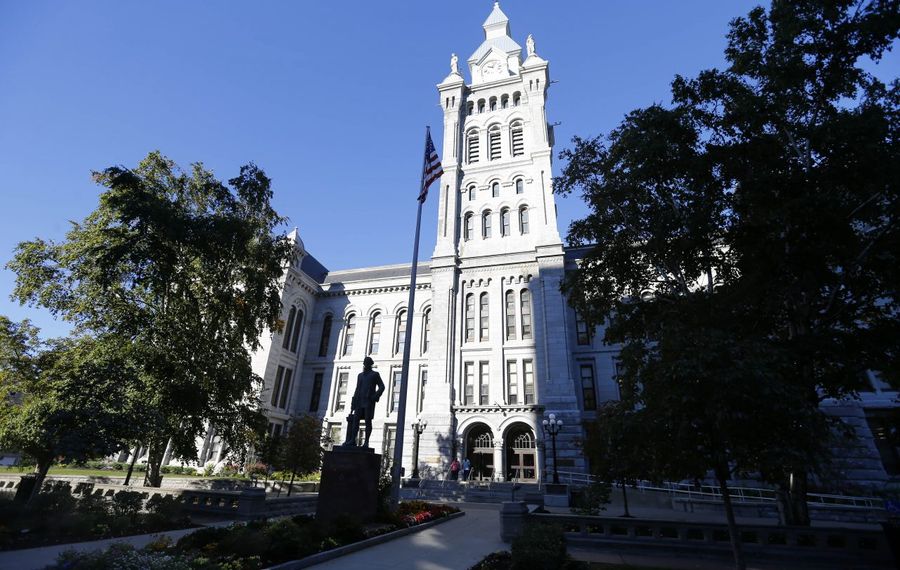 A group of jail reform activists who have been protesting conditions at the Erie County jails Monday took county lawmakers to task at a public hearing on cultural appropriations in the tentative budget for 2020.

A spokeswoman for Showing Up for Racial Justice Buffalo – or SURJ Buffalo – complained to county legislators over what she described as the Sheriff's Office using telephone revenues collected from inmates as a slush fund to cover the costs that she said should be paid for out of the general operations budget for the Jail Management Division.

"The Sheriff's Office is profiting from the people who are incarcerated," said Suzanne Bradley, of SURJ, referring to funds collected by Inmate Call Solutions, which contracts with the Sheriff's Office to provide telephone services to inmates at the jails and Holding Center.

Bradley said Inmate Call Solutions gets a portion of those funds and the Jail Management Division of the Sheriff's Office gets to keep a portion, some of which is used to cover its general expenses.

"The things they are using that money for, it seems to me, they should be coming out of the general budget and they should not be nickel and diming the people who are incarcerated at the Holding Center," Bradley said.

Bradley said the group has many concerns about the budget for the Erie County Sheriff's Office, particularly what funds go to the Jail Management Division.

She said inmates are charged 20 cents to 25 cents a minute per phone call, in addition to connection fees and for the use of accounts set up by their families or attorneys.

"It is not cheap. It is expensive for the people who are incarcerated to make phone calls and keep in touch with their families," she said.

"Every now and then, the sheriff comes in front of the Legislature and asks to use those revenues for things that are not directly related to improving conditions in the Holding Center," Bradley said. "In 2019, there was a transfer of $283,000 to lab and tech equipment for tour security and record management systems. There was a revenue of $400,000 in the telephone revenue account and that was used to purchase four narcotics detection canines for jail contraband. The balance in May of this year was $578,000, and it was used to buy $100,000 worth of kitchen equipment, including a convection oven, refrigerator, skillet, pans, two microwaves, stainless steel tables, dishwasher, utensils, fruit and vegetable slicers, two can openers, supplies and equipment."

The hearing Monday was designed to go over cultural appropriations in the budget.

Seth Wochensky, executive director of the Springville Center for the Arts, said the process for funding local cultural institutions should be more transparent and less political.

"I am a supporter of cultural funding. I think it does marvelous things," Wochensky said. "I think it's a huge investment in our communities with an enormous economic impact, but I think out of fear for losing that cultural funding, my colleagues have been reticent to cast light on the process. The problem with the process is that there really is no correlation between the grant writing review process and what actually makes it into the budget."

The proposed $1.7 billion Erie County budget for 2020 would add 69 full-time positions – the highest increase in new, full-time jobs than any year County Executive Mark Poloncarz has been in office.

The increases are primarily due to unfunded state mandates related to criminal justice reform and public health initiatives that would grow the ranks of the District Attorney's Office and Health Department, Poloncarz has said.

Overall general fund budget spending would grow by 1.67%, or $19 million over last year, according to the budget proposal. The county would collect $10.8 million more in property taxes, reflecting a property tax levy increase of 3.5%. That's a bigger increase than in this year's budget, but smaller than the prior three years.

The projected countywide tax rate, the amount of taxes paid per $1,000 of assessed value, would fall from $4.84 to $4.72. The tax rate would decline because Erie County property values are rising overall.