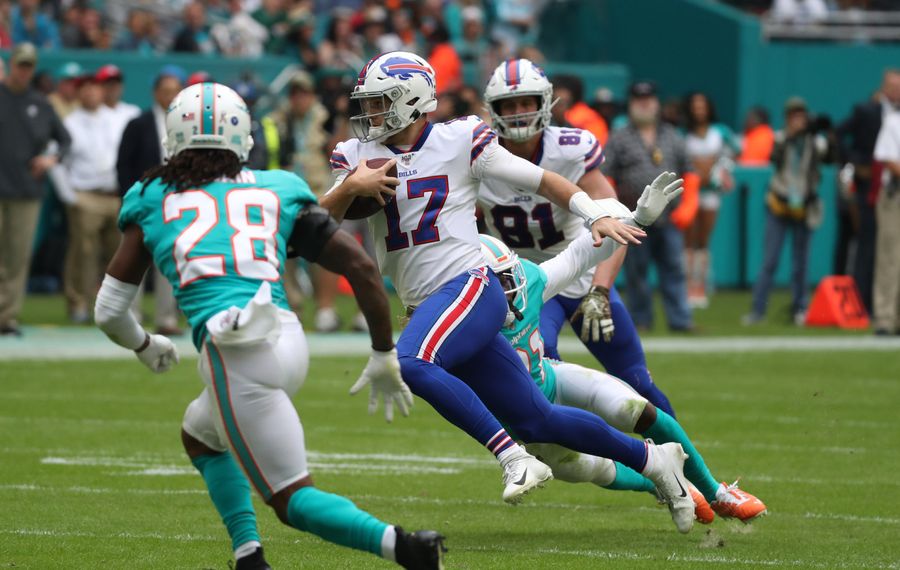 I had to laugh Monday morning as I started to watch the Buffalo Bills’ 37-20 victory over the Miami Dolphins for the second time in 24 hours.

The laughter came when CBS play-by-play man Spero Dedes opened the broadcast with an incorrect weather forecast. He reported it was 66 degrees at Hard Rock Stadium and was going to go up into the 70s during the game.

I was there on my annual getaway with my two sons, who were shivering in their short-sleeve Bills shirts as the temperature in the low 60s seemed much lower because of a strong north wind.

A young man from Sweden attending his first National Football League game was next to me and was shivering as much as he would have been if he stayed in his native Stockholm. Of course, we talked a lot about Rasmus Dahlin and other Swedes on the Buffalo Sabres.

As the game started, I asked him who he thought most of the Florida crowd was rooting for. “Buffalo,” he said.

I was rooting for it to warm up for the only game of the season that I could take off my objective hat. As Johnny Carson used to ask, “How cold was it?”

Cold enough to consider buying a Dolphins sweat shirt, the only one available inside the stadium. My sons would rather shiver – and they did.

I was actually colder than I was attending the Bills win over Washington in New Era Field with my son-in-law in a game that Fox play-by-play man Chris Myers compared Buffalo weather to the North Pole. I was dressed for the cold in New Era when the game lasted 2 hours and 45 minutes. I was wearing shorts Sunday for game that ran 3 hours and 22 minutes and seemed like it would never end.

Needless to say, it was a treat to watch the game again in the warm comfort of home. It helped that one of CBS’ most underrated analysts, Adam Archuleta, was the analyst alongside Dedes.

Archuleta passed what I will refer to as the John Madden Rule with flying colors. Before one of the Super Bowls, Madden told me that he considers it a good broadcast if he talks about everything on Sunday that is talked about Monday.

Archuleta did just that.

He explained the package of stunts and blitzes that harassed Miami quarterback Ryan Fitzpatrick, praised the improved pocket awareness of Bills quarterback Josh Allen and concluded with a reality check by explaining the Bills are about to be tested by the strong stretch of good teams coming up.

Archuleta also has good chemistry with Dedes, who has improved markedly since being teamed with the analyst.

Now on to some of the broadcast’s most notable moments.

Best Timing: A play after Archuleta said it doesn’t do any good if Allen just takes care of the football and doesn’t make any plays, the quarterback threw a 40-yard touchdown to receiver John Brown to give the Bills a 13-0 lead. Archuleta said Allen knew exactly what the coverage was before hitting Brown. “That’s the Josh Allen everybody wants to see, using his skills and talent and showing off his big arm down the field,” said the analyst. 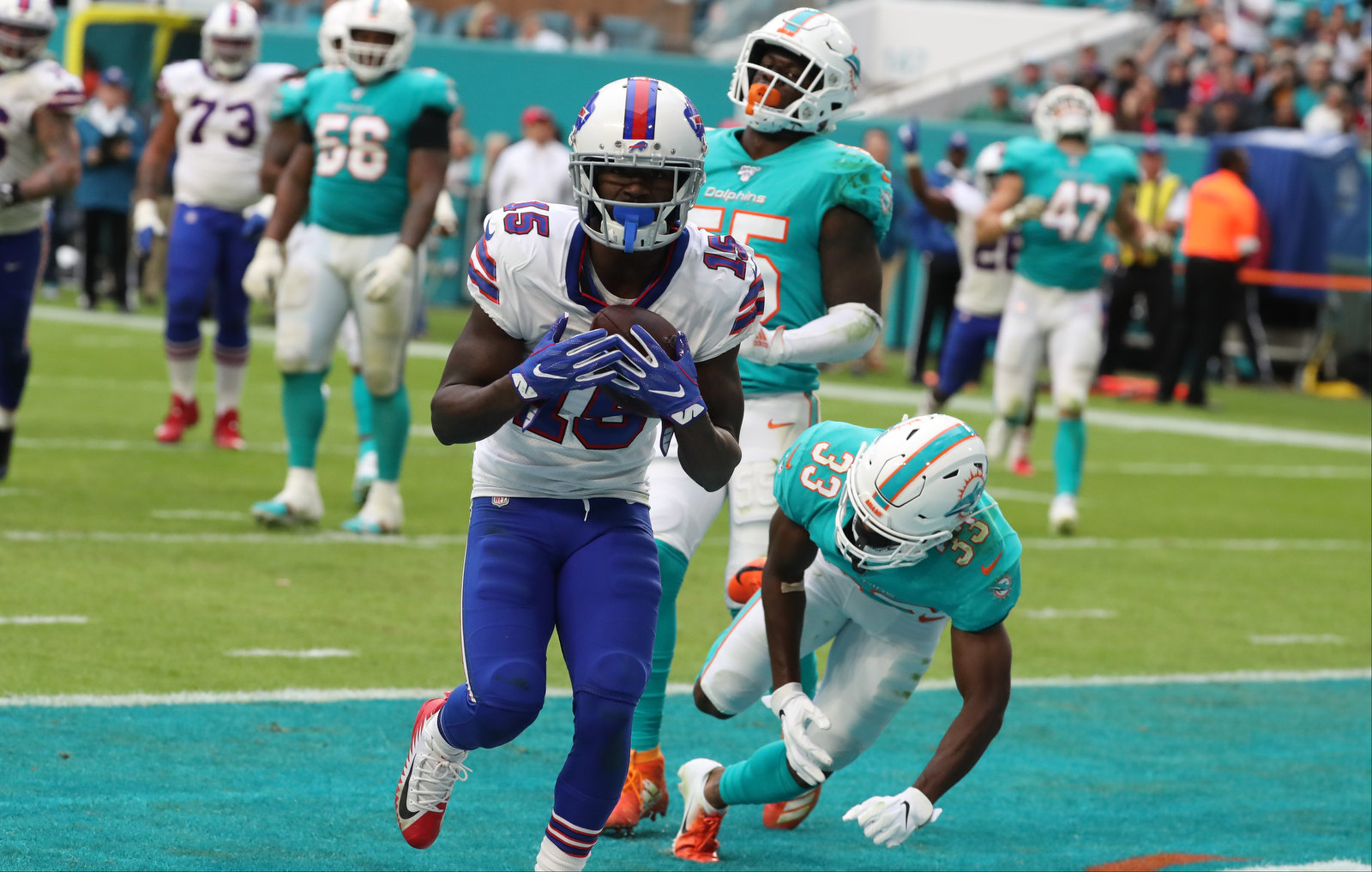 The “Glamorous” Drive: Archuleta questioned why the Bills were running the hurry-up offense with so much time in the game in the fourth quarter rather than snap the ball with five seconds left on the clock. Shivering in the stadium, I agreed. But the Bills scored a touchdown on the drive to make the criticism moot. “What a glamorous drive,” said Archuleta. “That was about as pretty as I think this offense can run.”

He Was Half Right: With the Bills near the goal line, Archuleta suggested the Bills roll out Allen and give him a choice to run or pass. Allen proceeded to score on an 8-yard run that gave the Bills a 30-14 lead. However, he ran after he initially dropped back to pass and couldn’t find anyone open. “I got it half right,” claimed Archuleta. I’ll give him that.

The Weather Report: Archuleta speculated that the weather probably was a factor “in allowing” kicker Stephen Hauschka to try the 51-yard field goal that gave the Bills a 3-0 lead. By that, he meant the relatively good weather rather than the more difficult conditions when Hauschka’s missed two kicks in Cleveland.

Buffalove: Dedes mentioned early and late how many Bills fans were in the stadium. “Listen to these Bills fans. We know how well Bills fans travel throughout the league,” said Dedes in the first quarter. A Miami resident originally from Connecticut told me that the stadium often is full of fans from opponents because there so many transplants in Miami. “When Pittsburgh plays Miami, there are Terrible Towels everywhere,” he said.

What Brown Can Do to You: On a Dolphins pregame show piped into the stadium, one Miami analyst noted that Bills receiver John Brown is no Antonio Brown. True. But he sure had Antonio’s numbers Sunday – nine catches for 137 yards.

Needless Needham Praise: Dolphin cornerback Nik Needham was praised early by Archuleta for his coverage on Brown, but he appeared to be one of two Dolphins victimized by Brown in zone coverage for the 40-yard touchdown and also later in single coverage. 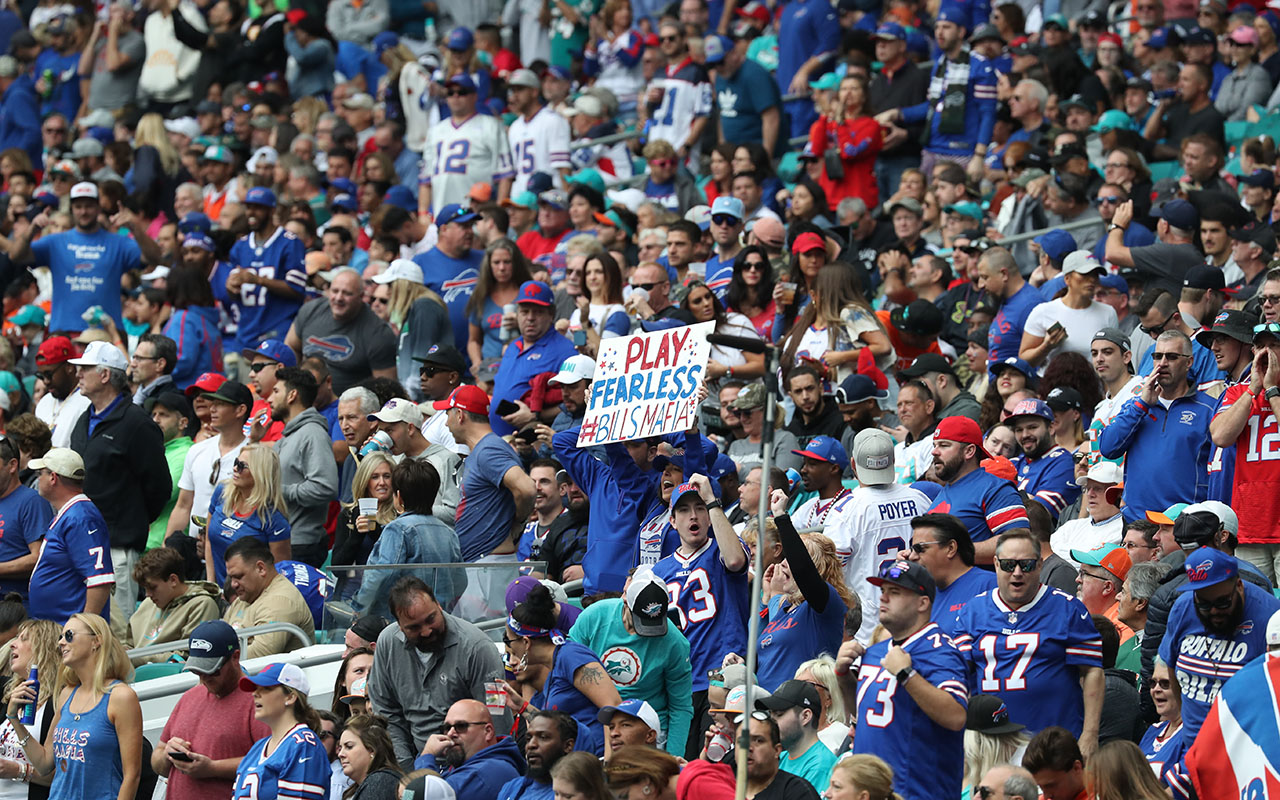 The Kindergarten Move: When Dolphins cornerback Ken Crawley was penalized for shoving a Bill after the play was over, Archuleta likened it to an old kindergarten routine. He and Dedes have added more humor to their repertoire.

The Buffalo Defense: Dedes seemed surprised that McDermott held practice outside last week in the cold. “Maybe to you, but 26 degrees isn’t that cold,” said Archuleta. As I said earlier 60 degrees can be colder if you aren’t dressed for it.

Best Analysis: In explaining why the Bills blitzed so often, Archuleta said he wasn’t sure if they were good enough – “particularly at defensive tackle – to just line up and beat guys in front of them and I think that has led to a lot of their problems.”

The All Pro?: Archuleta noted that Bills linebacker Matt Milano didn’t play in the Bills first win over Miami and “I think that really hurt the defense.” Added Dedes: “I’m not sure he’ll make the Pro Bowl, but he’s playing like a Pro Bowler.”

The One-Trick Pony No Longer: Archuleta noted that John Brown was considered to be a one-trick pony as a speed receiver but is proving that assessment wrong.

The Star Report: After Star Lotulelei made a nice play, Archuleta piled on: “When you watch film, he is one of the reasons they haven’t been playing the run very well.” Other experts – including McDermott – have disputed that.

Fake Out: Dedes was among those who were initially faked out when Allen had a 36-yard run after a fake to a back, but the play-by-play man figured it out before the Miami defense did.

The Mustache: To illustrate how well they followed the Madden Rule, the announcers even mentioned the mustache of Bills offensive coordinator Brian Daboll, which became a topic of discussion this morning. “It is impressive,” said Dedes.

The Competitor: A former St. Louis Rams teammate of Fitzpatrick, Archuleta said he never thought Fitz would have the career he has had but praised him as “an example of what it means to be a competitor.” I am pretty sure the Bills Mafia would agree.

Where’s Another Replay? Dedes questioned whether the successful Miami onside kick went the required 10 yards before being touched by the Dolphin kicker, but there was no definitive replay shown.

Zebra Report: Archuleta initially thought Dolphins receiver Allen Hurns had a catch for long enough before fumbling before the McDermott challenge of an incompletion was successful and the Bills were given the ball on the recovery. CBS officiating expert Gene Steratore agreed with the successful challenge. Archuleta also thought Dolphins receiver Mike Gesicki got a very charitable first-down spot and Dolphin lineman Evan Boehm was erroneously called for holding on a play that negated a big Fitzpatrick run. He questioned why Bills defensive lineman Corey Liuget was called for roughing the passer (Fitzpatrick), saying “he barely grazed him.” The NFL should consider moving Archuleta to the league office to judge questionable calls.

Cue Up a Billy Joel Song: Archuleta was especially complimentary of Allen for making Miami pay for bringing pressure with the touchdown pass to tight end Dawson Knox.

Good Heavens: Archuleta praised Devin Singletary’s running ability but added his two fumbles were a concern. “If this starts to become a trend, we’re going to see Singletary on the bench,” said Archuleta. I can almost hear the Bills Mafia shout “no” in unision.

No Bye: Dedes said the Bills have a bye in the 14th week. They already had their bye. They don’t play on Sunday in the 14th week because they play Dallas on Thanksgiving Day.

Reality Check:  At game’s end, Archuleta said you can’t take anything away from the Bills before adding, “you have to recognize the fact they’ve been able to beat bad teams. And they’ve got to prove here, they’re going to have a chance to see if they can go out and play and beat the big boys.” Bills fans would consider that really glamorous.