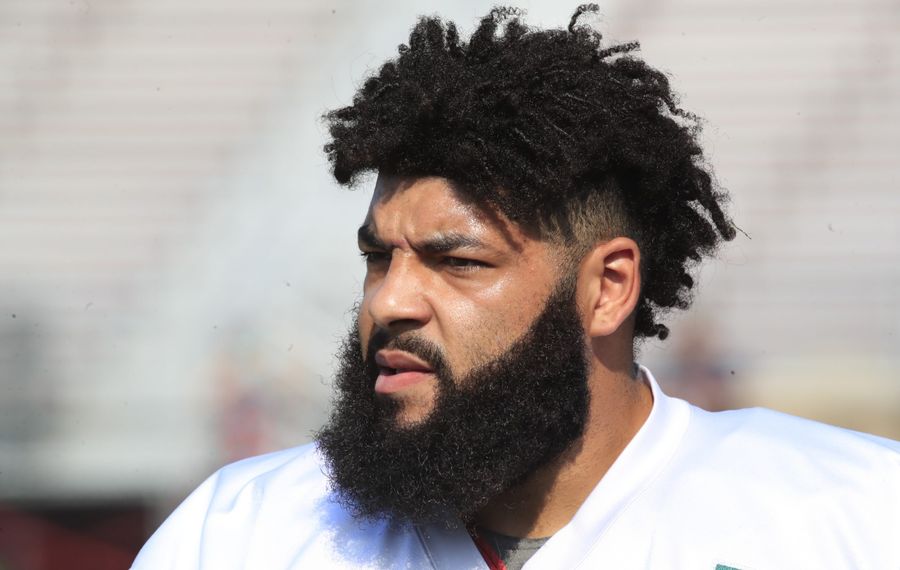 MIAMI GARDENS, Fla. – A common refrain around the NFL goes like this: After the halfway point of a season, rookies are no longer really rookies.

Cody Ford would kindly like to debunk that theory.

“I still feel like a rookie,” the Buffalo Bills’ first-year right tackle said Sunday, following his team’s 37-20 win over the Miami Dolphins at Hard Rock Stadium. “I hear it every day in the room. I wouldn’t call it an easy transition. It’s the NFL. Nothing comes easy.”

Ready or not, Ford is going to find that out over the next couple weeks. With veteran Ty Nsekhe being carted off the field Sunday against the Miami Dolphins with a right ankle injury, Ford is presumably going to take over as the full-time starter at right tackle.

Coach Sean McDermott said Monday that Nsekhe was having more tests done on his ankle, so the severity of the injury is not yet known. Coming into Sunday’s game, the two had split snaps almost equally, with Nsekhe playing 332 and Ford playing 327 through nine games.

“You take it as it is, you know? If it happens to be where he's seriously hurt, which I would hate for that to happen, I've just got to step up and take more of a role than I am now, if that's the case,” Ford said. “Like I said, hate for him to go down like that. Especially one of the O-line guys, you know, we ride for each other. Seeing him get carted off, we had to make a statement. We've got our guy's back and we've got to go do this for him.”

It’s unusual for an NFL team to stick with a rotation at a position for as long as the Bills did at right tackle. Clearly, the team felt like it was working for both players.

"There's power in that rotation," coach Sean McDermott said Monday. "That's helped us. That helped us through this game and now it's hopefully enabled Cody to go on if Ty can't play and do it, either on his own, or we have some other combination there. I really thought Cody played a good, physical brand of football yesterday and he'll continue to get better."

Ford and Nsekhe made it a habit of communicating with each other between series about what they were seeing from the defense.

“The thing is, we help each other out. He doesn't leave me out there on an island, and I don't leave him out there on an island,” Ford said. “Being that he's an older guy, he's a vet, he's got experience, so there's things he's telling me, teaching me. Off the field, after practice and things like that. So he's there for me, I'm there for him. We want to do whatever it takes to win ballgames for the team.”

Ford ended up playing 52 snaps against the Dolphins, 72% of the team’s total. Nsekhe played 20 snaps (28%) before getting hurt in the third quarter when a Dolphins defender rolled up on him.

“He just came back in and did his thing,” right guard Jon Feliciano said of Ford. “It sucks that we lost Ty. Ty is a great football player, but Cody will be ready. He played the rest of the game lights out.”

Ford will need to be at his best in the coming weeks. The Bills host the Denver Broncos and star pass rusher Von Miller in Week 12, then go to Dallas on a short week for a game on Thanksgiving. The Cowboys’ DeMarcus Lawrence is another premier pass rusher.

“There's something new every game,” Ford said. “You're always making adjustments. I have guys like Ty, like Dion (Dawkins), Jon Feliciano, all the older guys in the room who are always there to help me bounce some knowledge off of them. Just taking a bunch of experience and putting it together and just trying to go play for the team.”

That was John Brown's day in catches, yards and touchdowns. That bumps his season totals to 56-817-4 -- a yardage total that leads the AFC heading into Monday Night Football and ranks eighth in the NFL. Brown has 44 catches that have produced first downs, which ranks sixth in the league, and 13 catches of 20-plus yards, which is tied for eighth. He's on pace for 1,307 yards. There have only been four 1,300 receiving yard seasons in Bills history – two by Andre Reed and two by Eric Moulds

The Bills remain a game up in the race for the first AFC wild-card spot. At 7-3, they are two games behind the New England Patriots in the AFC East race. Houston (6-4) holds the second wild-card spot by way of a tiebreaker over the Raiders, who have the same record.

1. The Bills didn’t use their “heavy” offensive package much. Blocking tight end Lee Smith played a season-low seven snaps (10%), while fullback Patrick DiMarco was on the field for just four snaps (6%).

2. The team has pretty much gone to a three-man rotation at defensive end. Rookie seventh-round draft pick Darryl Johnson Jr. played just four defensive snaps (6%). Jerry Hughes led the defensive ends with 53 snaps (77%), followed by Shaq Lawson (43 snaps, 62%) and Trent Murphy (34 snaps, 49%). It’s interesting that Lawson was on the field more than Murphy. That’s the first time that has happened this season.

3. Kevin Johnson got more playing time than the struggling Levi Wallace at cornerback. Johnson was on the field for 36 snaps (52%), while Wallace played 33 (48%). It will be interesting to see moving forward if that rotation continues or if Johnson can take over the job on a full-time basis.

5. There is little doubt that Devin Singletary has solidified himself as the team’s primary running back. Singletary played 53 snaps (74%) against the Dolphins, compared to just 19 (26%) for Frank Gore.

The Bills return home after a two-game road trip to host the Denver Broncos in Week 12 – another big game in the tight AFC playoff race. Here are three things to know about the Broncos:

1. They collapsed Sunday. Denver led Minnesota, 20-0, at halftime, but couldn’t finish off what would have been a big upset, losing 27-23. It was the fourth loss of the season in the final minute for Denver. “It’s just disappointing,” coach Vic Fangio said. “We didn’t lose that game because we didn’t play hard enough. We had a good effort from a physical standpoint. They’re a good football team. They have a good record. They’re one of the best teams in the league. We just didn’t quite get it done.” It’s the first time since 2014 a team has lost when it held a lead of at least 20 points at halftime.

2. It will be an Allen vs. Allen matchup at quarterback. The Broncos started the season with Joe Flacco at quarterback, but he was placed on injured reserve after suffering a neck injury in Week 8. He’s been replaced by Brandon Allen, who went 17 of 39 for 240 yards, one touchdown and one interception against the Vikings – a passer rating of 61.9. The interception was a costly one, coming in the red zone at the end of the first half and taking potential points off the board.

“He made a bad throw into coverage, and they picked it,” Fangio said. “In hindsight, maybe we just should have ran it three times and got our three points and been happy, but you would have roasted me if I did that.”

Rookie quarterback Drew Lock, the Broncos’ second-round draft pick, can be activated off injured reserve between now and the beginning of December. With Denver’s playoff hopes all but over at 3-7, it’s possible that they make a move to get Lock some playing time before the end of the year.

3. They’ve got an emerging star in Courtland Sutton. The second-year wide receiver finished with five catches for 113 yards against the Vikings, dominating his matchup with Minnesota’s top cornerback, Xavier Rhodes. Sutton also completed a 38-yard pass on a trick play.

“Courtland’s tough to handle, and we thought we could get some balls to him in this game up the field and we did,” Fangio said. “They gave him a lot of attention, too, but he’s a great player for us. He’s one that we can build around.”