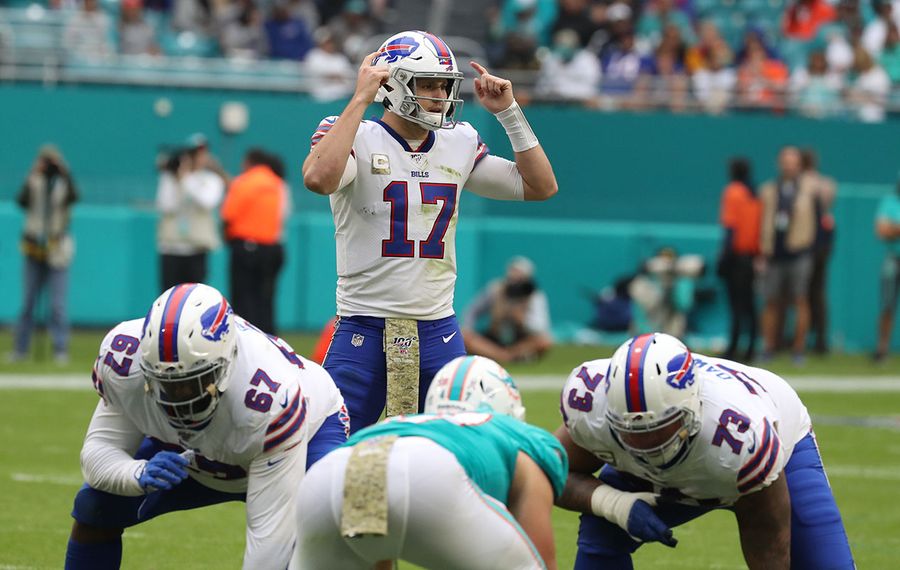 Jim Kubiak has been analyzing the play of the Buffalo Bills quarterbacks for BNBlitz.com. He is the all-time leading passer at Navy, has played in the NFL, NFL Europe and the Arena Football League, and has been a coach and executive in the AFL. He spent eight years as the radio analyst for the University at Buffalo and runs the Western New York Quarterback Academy to help develop the next generation of quarterbacks.

Josh Allen’s completion percentage was an impressive 63.6% against the Miami Dolphins, as he completed 21 of 33 attempts for 256 yards and three touchdowns to equal his career high in the Bills' 37-20 victory. His Quarterback Performance Grade was 89.75%, according to our "Do Your Job" evaluation system.

Additionally, Allen was explosive rushing the football as he gained 56 yards on seven carries, which included one rushing touchdown. The second-year quarterback played with poise and increased comfort from the pocket as he directed the Bills to a season-high 37 points on seven scoring drives. Allen has not thrown an interception in the last five games, spanning 163 attempts.

The focus that Allen played with against the Dolphins was demonstrated on the third offensive play of the game.

On second-and-4, from the Dolphins’ 47-yard line, Allen wisely hit tight end Dawson Knox underneath the coverage to pick up the first down on a 9-yard completion. Knox was in the flat and the first read for Allen in tight bunch formation. This was a different approach compared to last week's performance against the Cleveland Browns in which Allen was forcing the ball down the field and into coverage rather than “taking what is given." Efficiency and first downs were a bigger priority. Here, he takes the easy completion that leads to a first down on a drive that ends with a field goal and a 3-0 lead.

On the next drive, following a scramble on second-and-9, Allen catches the Dolphins trying to change personnel. He used a “hurry-up” tempo for a third-and-5 play. This was outstanding gamesmanship, and a very smart play to create a penalty.

The penalty assessed to Miami for having 12 men on the field resulted in third-and-1 play. Allen kept the ball on a sneak for the first down. This ultimately led to another field goal and a 6-0 lead at the end of the first quarter.

Allen threw his first touchdown of the game to John Brown at the end of a five-play drive that began on the Buffalo 19. Allen was 3-for-3 in five plays and delivered a cannon-like strike down the right sideline to Brown.

Allen demonstrates his understanding of cover 2 as the Dolphins initially looked like they were going to blitz with cornerback Nick Needham, who was playing directly over Brown. At the snap, the cornerback's responsibility in cover 2 is to try to force Brown’s release to the inside to his half-field safety, where he has defensive help. The faking blitz posture by Needham allowed Brown to get the outside release into the voided area behind the cornerback and in front of the half-field safety.

This location is known as the “turkey hole.” Allen recognized the coverage, anticipated Brown’s release and checked the safety Bobby McCain with his eyes before unloading a perfect shot into the turkey hole. This was outstanding execution by Allen, and the Bills had a 13-0 lead.

Allen’s second touchdown pass was just as impressive as he threw “hot” versus an all out blitz on third-and-9 from the Dolphins' 23.

The Dolphins were blitzing everyone and playing man-to-man in coverage behind the rush. In past games, teams have had success against Allen by creating confusion at the line of scrimmage. One thing to remember in protection is that the defense can always bring one more defensive player than can be blocked. This player is then assigned as the quarterback’s responsibility. The quarterback must know who is unblocked and then react if that player blitzes. Once he recognizes this, then he must throw to the designated “hot” receiver before the free defender gets there.

Allen read this to perfection. He recognized the blitz, knew who was “his guy” and threw hot to Knox just as he came open behind the blitz. The Dolphins’ defender responsible for covering Knox was deeper than he should have been trying to disguise the defensive look, and his depth allowed Knox to make the catch and then break the tackle for the 23-yard touchdown. This was elite execution by Allen and the Bills' offense, illustrating growth in a much-needed area.

The Bills offense dominated in the first half, rushing for 115 yards and impressively operating in Dolphins territory on 23 of 41 plays.

Allen: 3 for 4 passing for 38 yards; one carry for eight yards and a touchdown.

Allen was 3 for 3 on the Bills' first drive of the third quarter. On the second play of the drive, on second-and-10, he found Isaiah McKenzie.

This was an amazingly patient play and throw by Allen because of the great presence that was required to complete the football. In previous games, Allen has often left the pocket early once his initial reads were complete. This time, he hung in the pocket and allowed his receivers to recognize that the initial passing concepts had run their course. In this instance, McKenzie adjusts his route back to the outside into an opening in the defense. Allen saw the same opening and anticipated McKenzie’s adjustment for a 16-yard gain.

This kind of synergy, patience and anticipation is exciting to watch and very difficult to defend. This drive led to another Buffalo touchdown seven plays later.

On third-and-8 from the Dolphins' 8-yard line, Allen drops back and again patiently surveys the field until pressure forces him to leave. As he escapes to his right, Allen has the vision and awareness to see the open field in front of him. This decisive action combined with his elite rushing ability allowed him to reach the front pylon for the touchdown. Defenses often play man-to-man in red-zone situations as the Dolphins were on this play. But playing man puts defensive backs in a position where they cannot account for Allen running the football. Allen knows this and utilizes his agility and speed for his third touchdown of the game.

Allen: 6 for 8 passing for 55 yards with one touchdown; two carries for four yards.

The final scoring drive for the Bills and Allen came on the eighth play of the quarter. On first-and-goal from the 9, Allen play-actioned to his left and booted to his right. On the perimeter, Allen found Brown on his back-side drag route for the 9-yard touchdown. 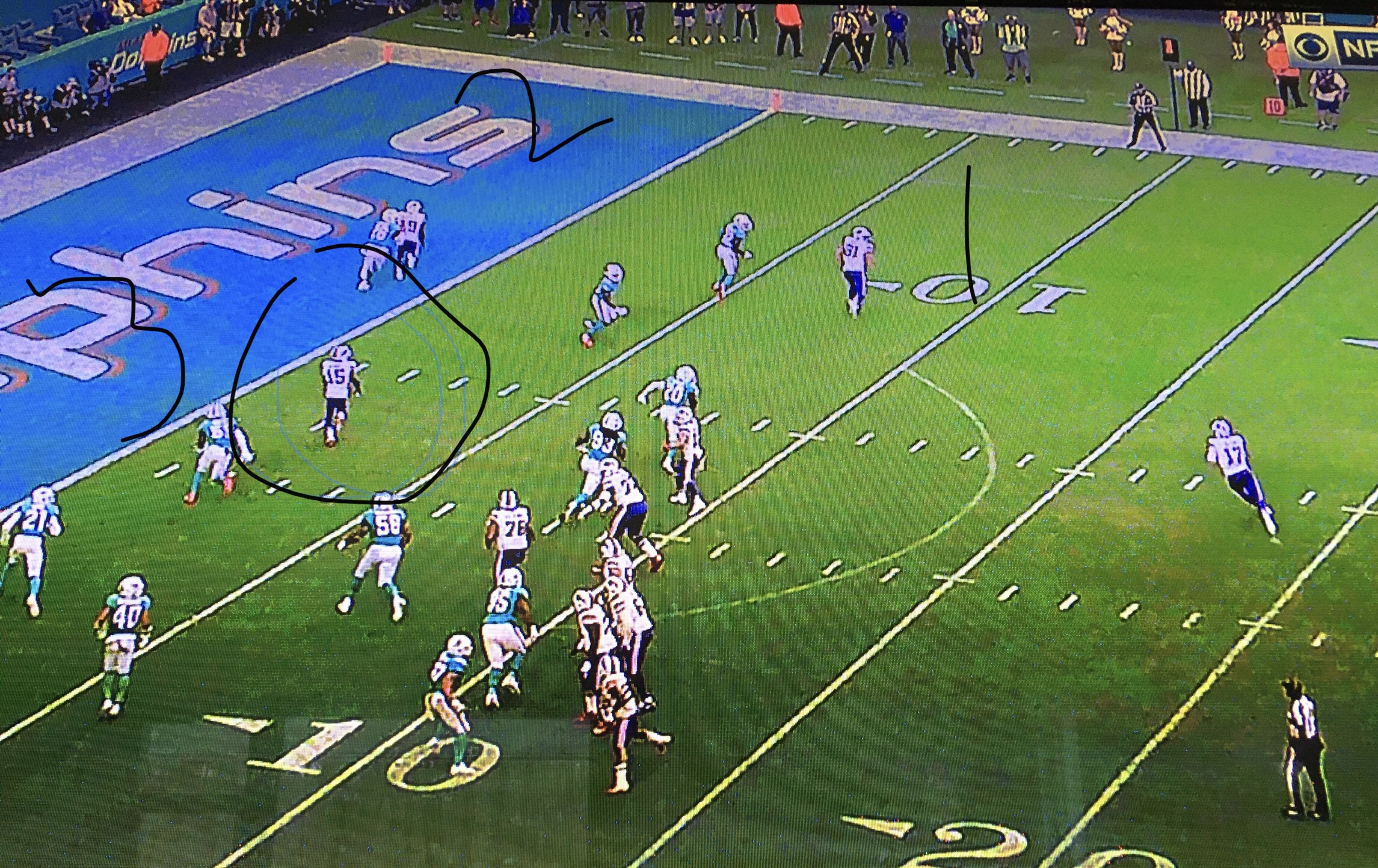 Allen had Kroft in the flat, McKenzie to the corner, and Brown coming across from his back-side alignment. The play-action ballhandling created the illusion that the Bills were running the football to the left. The momentum and energy created by the action allowed Brown to get across the field and into an open area. This well-executed “boot pass” sealed a solid 37-20 Bills road victory.

Allen has accounted for 16 touchdowns (10 passing/6 rushing) and seven interceptions in 10 games. He has five consecutive games with two touchdowns or more and no interceptions, the first quarterback to do that since Seattle's Russell Wilson in 2015. Allen has completed 170 passes in 284 attempts for a completion percentage of 60%.

It is important that fans realize and value the progress that Allen has made in a very short period of time. He has only 22 career starts and has the Bills in playoff contention.

Allen is a player whose skill set does not perfectly fit into the definition of a quarterback. He is an unconventional talent, possessing an abnormally strong arm and an uncanny ability to run. He is growing, learning, improving with each new experience and should he continue to evolve, will lead the Bills into the playoffs.

Remember that the long ball is not as important as some believe. Long completions do not define success. What is most important is his leadership, his ability to protect the football, his efficiency and his operational skills handling pressure at the line of scrimmage. Long throws beyond 40 yards are rare and low percentage, and are not plays that define quarterback. These over the top, down the field throws are often dependent on the situation and are not necessary on the list of essential elements for Allen and the Bills to be successful.