Leave it to East Aurora to make a party from a mud pit, but after weeks of dealing with the overhaul of Oakwood Avenue, merchants and residents will gather to celebrate their misery.

Mud, Sweat and Beers, a music festival with a cause, is scheduled to take place from 1 to 7 p.m. Dec. 1 at Wallenwein’s Hotel at 641 Oakwood. The venerable pub and village staple since 1882 has become ground zero for disgruntled business owners and residents to kvetch since the $4.6 million project to upgrade a 1-mile stretch of Oakwood began in September.

“We’re coming into our prime season, and we’re having this traffic pattern disruption, this parking disruption, this mess," said Jay DePerno, owner of Elm Street Bakery, one of a dozen or so businesses affected by the construction. "There’s a lot of people who don’t want to go down this way because they can’t walk around. It’s muddy and gross. This is Christmas.”

Parts of the mud-clogged street are impassable, causing headaches for some children who walk to school.

"It's not dangerous, but it's muddy and it gets you all dirty," said Emily Ferguson, an eighth grader who lives on Olean Street. "Kids who walk to school will be dirty before they even get there."

Work on the first phase of the two-phase project began Sept. 3 and is scheduled to be completed the first week of December, said Cathryn C. Thomas, village administrator. The project calls for waterline and sewer replacement, drainage improvements and total reconstruction of the road, including replacement of curbs and sidewalks along a 1-mile stretch of Oakwood that runs from Olean to Hamburg streets. Approximately 150 residences and businesses are being affected by the construction. The contract was awarded to NOVA Site Co., of West Seneca.

“We knew it was coming. Oakwood’s been kicked down the road for years, so there was a whisper in March of 2019 that this was going to happen. But in reality we actually got a week and a half notice that it was beginning after they posted it on the village website in late August,” DePerno said.

The first phase of the two-phase project included the installation of a drainage system from Olean to Park Place and will end in December when a binder coat of asphalt will be applied, said Thomas. The village announced a portion of Oakwood would be closed except to local traffic while the construction takes place.

“We put a notice that driveways would not be accessible because we didn’t want people damaging their cars,” Thomas said. “We just opened a new parking area at the end of Elm Street for residents who want to patronize merchants in the construction zone.” 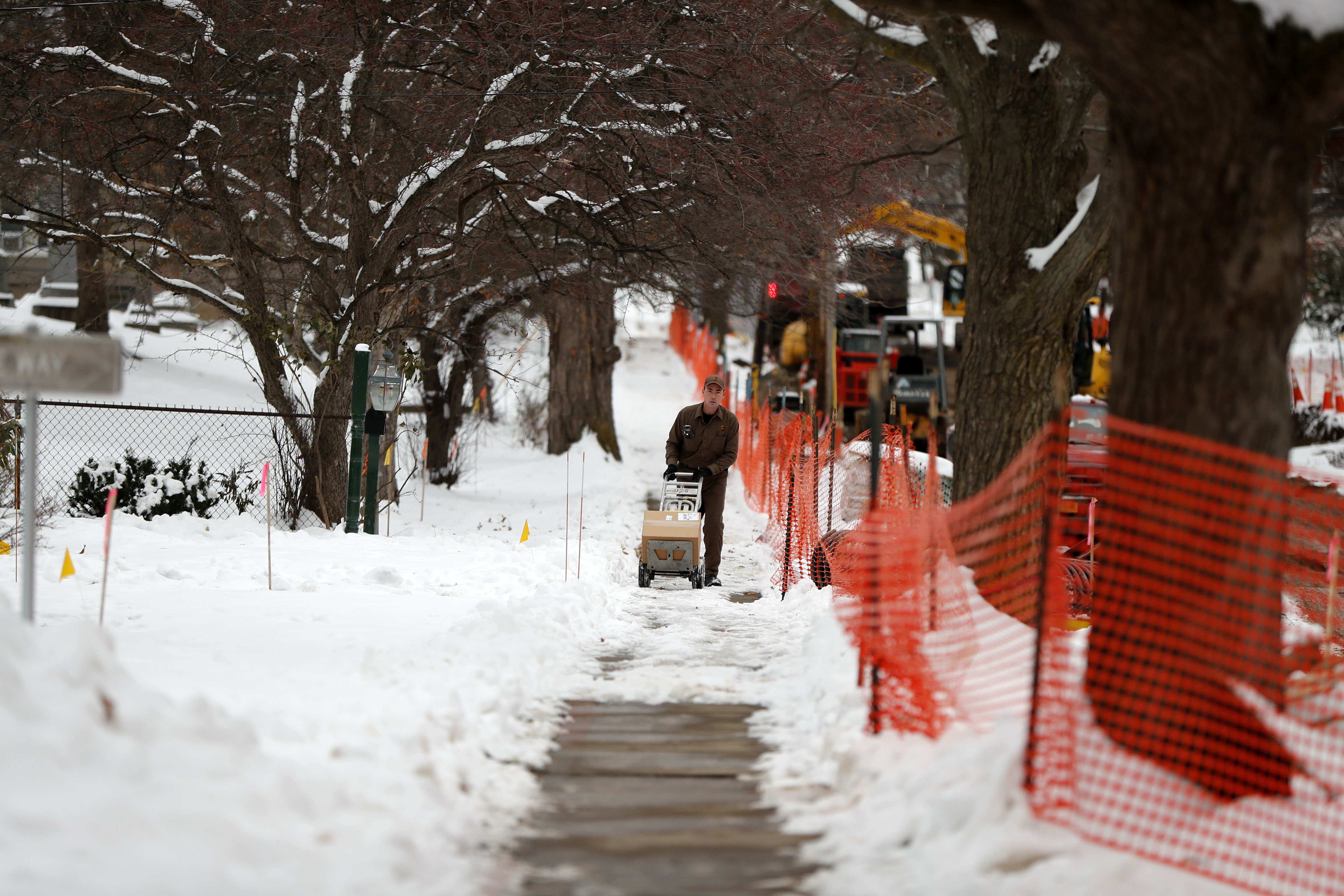 The parking lot opened Tuesday across from Elm Street Bakery and a half-block from Wallenwein’s. It is around the corner from Oakwood Square, a commercial plaza where Bob Aures, owner of Pizza Del Aureo's, has been for 25 years. Aures said his business dropped 15% because of the construction.

“There’s less walk-in traffic because it’s less easy to get here,” Aures said. “Deliveries have increased. Take-outs are down.”

Even so, students from East Aurora middle and high schools stop by the pizzeria on their way home. Residents come from across the village – with some jockeying.

Nancy Murphy lives on Parkdale Avenue, on the other side of Main Street.

“You have to jockey around. In order to get here, you have to go up, over, around, down. It’s an inconvenience,” said Murphy. “God only knows the people who live on Oakwood. They’ve probably lost their cars."

Dale Parrish, a contractor for 40 years, lives on Oakwood. He registered his complaints with kid gloves, but that does not change reality. He still uses a wheelbarrow to transport groceries to his home, and he said his children won't even visit him.

"No one was picking up our trash for a while," said Parrish. "We were supposed to be without our driveway for two weeks. We still can't use it. We can't walk over a half block, so I used a wheelbarrow for my groceries. We've been trapped in our house for more than a day by the work because we didn't get adequate notice to move our cars. No one person is to blame. Everyone is making mistakes. The village, the contractor. The communication is terrible."

DePerno and other merchants fault the village for a lack of communication with regards to project updates. 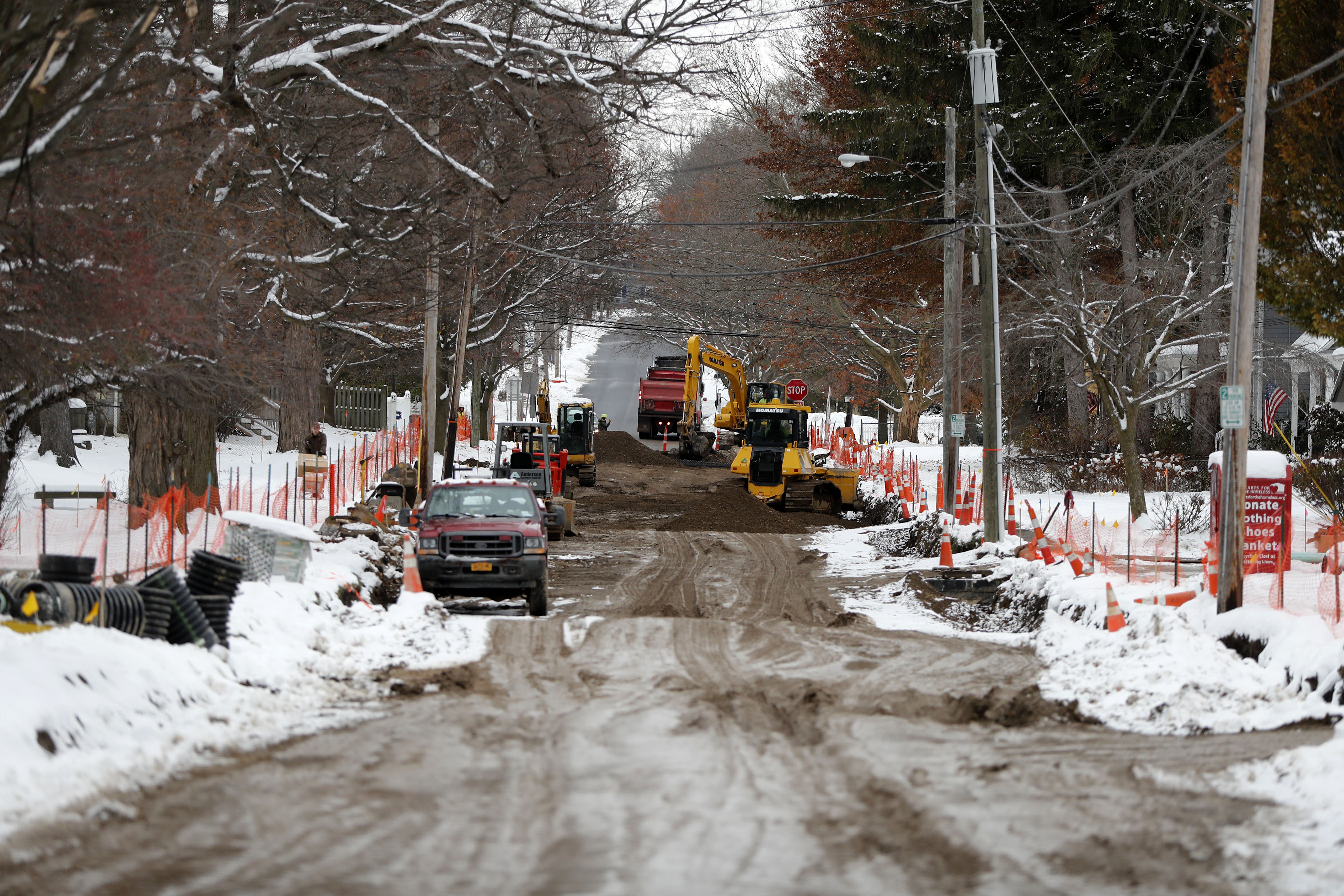 “We’re in our sixth week with no access,” said DePerno. “I’m starting to doubt the messenger. I’m watching these guys in the same spot. NOVA construction is doing a better job now. I think they have more help in. It's a complicated project. Soil instability is an issue. A sewer line broke during roadwork, and we had raw sewage in the General Riley House. That's when I really got involved."

To facilitate communication, the village hired a project spokesman who is on call to answer project-related questions, said Thomas, the village administrator. In addition, a full-time inspector is on site to ensure compliance with the contract. The project engineer has also provided the village with emailed responses to complaints from residents, like an explanation for the prolonged construction in one location.

“The current phase under construction between King and Olean is without question the most complicated, and the contractor has performed that work in a very reasonable time, so the remainder of the project should not be complicated by comparison, allowing for a longer stretch of work in a less or equal amount of time,” said Jason Havens, the project engineer from Clark Patterson Lee, in an emailed statement.

The party on Dec. 1 will go on whether or not the roadwork is complete, planners said.

"It will serve as a wake-up call to the village in terms of good governance and communication," DePerno said. "This village will do a $10,000 study on a crosswalk, but an investment decision on infrastructure with a 50-year impact, you have to look beyond the lowest bidder."