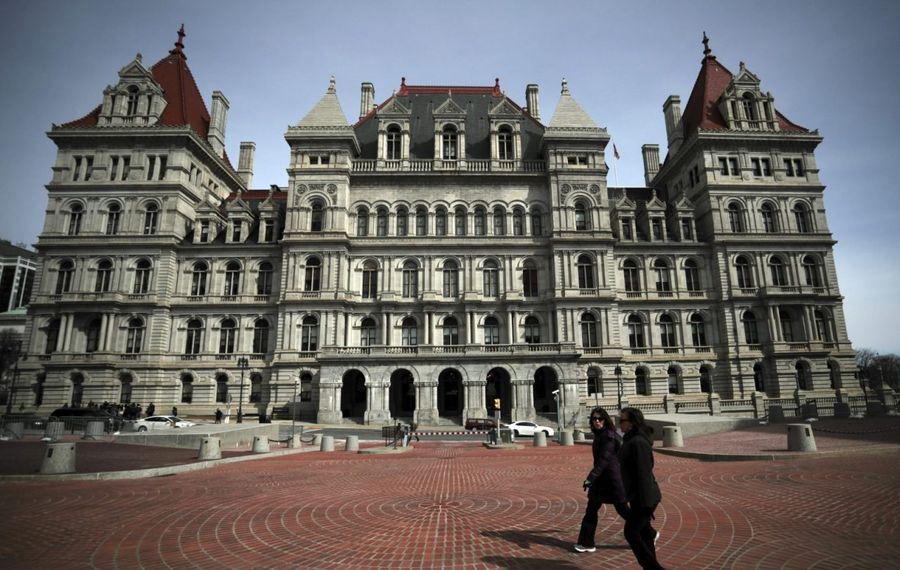 ALBANY – Nearly nine full years in office, Gov. Andrew M. Cuomo is the dean of the Democratic Party’s class of governors across the country.

Some have talked him up as a potential Democratic contender for the White House, which Cuomo says he won’t do in 2020.

And Cuomo, whose late father, Mario Cuomo, was a Democratic Party icon in many quarters, routinely relishes the opportunity to take to the state and national broadcast airwaves to rhetorically bash President Trump and other Republicans in Washington.

So, why is the governor, the titular head of the New York Democratic Party, increasingly hiring influential staffers who were previously employed in senior posts by Senate Republicans?

It’s a question many Democrats in the Legislature have been asking – though, given the governor’s long reach, not publicly. Many are angry that Cuomo is turning to ex-GOP staffers instead of people from his own party.

“Are there not enough Democrats in New York to get these jobs?" one lawmaker, who like others spoke on condition of anonymity, said of a blue state where Democratic voters vastly outnumber Republicans.

For Senate Republicans, ousted from the majority in last fall’s elections, they are pleased with the unusual boast they can make for a party out of power: access to top executive branch employees who used to work for them.

“Anytime that you’ve got some sort of preexisting relationship, where you have some familiarity with someone on the professional level, I think that can be helpful," said Sen. Patrick Gallivan, an Elma Republican. 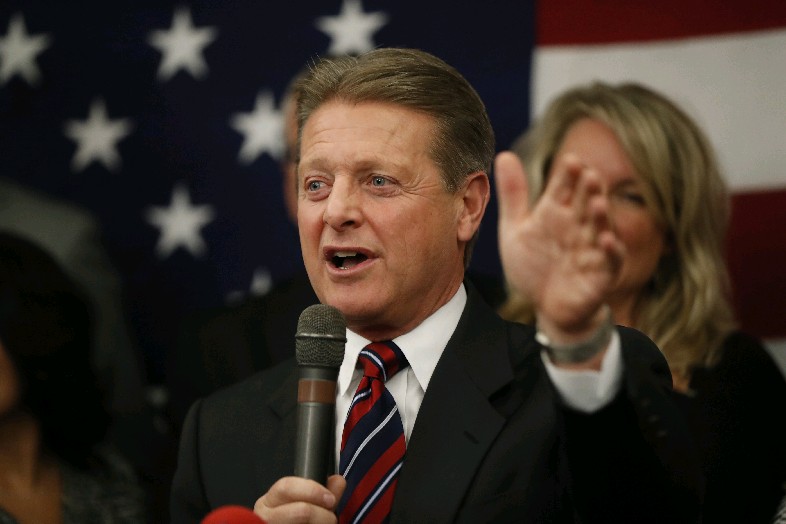 Gallivan said Cuomo made good hiring decisions by tapping smart and experienced former staffers from the Senate GOP, people who now have executive branch responsibilities involving big infrastructure projects, Medicaid and other health matters and the fiscal affairs of a state budget that this year reaches $175 billion.

The GOP senator said knowing key people close to Cuomo “is beneficial as I’m trying to advance matters important to my constituency." He stressed that knowing the staffers doesn’t mean he necessarily gets what he wants, but that the access helps.

Being willing to cross party lines and hire Republicans is not new for Cuomo. He has tapped former advisers to such Republicans as former governors George Pataki of New York and Chris Christie of New Jersey.

The Cuomo administration said the hiring decisions come down to finding the most talented people – staffers who work in an especially demanding gubernatorial administration. In fact, even the harshest critics of his Senate hiring moves acknowledged Cuomo was getting professionally qualified people who know well the workings of Albany and state government.

“The governor sets the agenda and then hires the best and the brightest to implement it. Period," said Richard Azzopardi, a senior adviser to Cuomo.

Team Cuomo has seen a number of Senate GOP staffers come aboard both prior and after the GOP was ousted from power in the 63-member Senate in November 2018. Democrats increased their staff ranks in the Senate after assuming control, cutting sharply the staff salary allotments for the GOP.

The most recent major hire was Elizabeth Garvey, who was the top counsel to Senate Republicans. In September, Cuomo hired her as his special counsel – putting her in charge of his budget, legislative and policy priorities.

She joins other top former Senate GOP staffers, including Robert Mujica, the state’s budget director who is among a tight circle of top advisers Cuomo relies on after luring him from the Senate GOP in the beginning of 2016.

Six months after Mujica joined, Kelly Cummings, who was the influential communications director for Senate Republicans, was hired by Cuomo. Earlier this year, she was promoted to be Cuomo’s director of state operations and infrastructure, a post from which she holds enormous power over state agencies and big public works projects.

The Senate GOP hiring spree by Cuomo’s office accelerated after the arrival of Mujica as budget director, a post that makes him responsible for crafting and negotiating the budget with the Legislature. Mujica had been the fiscal adviser to three Senate Republican Majority Leaders: Joseph Bruno, Dean Skelos and John Flanagan. While in the Senate, Mujica often negotiated directly with Cuomo.

A number of these new hires by Cuomo came after the Senate GOP lost control of the Senate. They hold key posts on the Capitol’s second floor – where the governor works – and the first floor, which is home to the governor’s budget division. 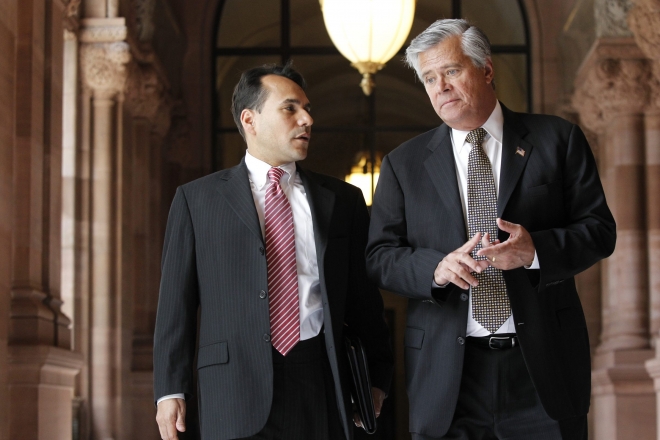 The hires include Paul Midey, a former Senate Finance staffer and transportation expert, now an assistant counsel in Cuomo’s office. Rebecca Wood, with a background in health and other policy areas, came from the Senate counsel’s office to Cuomo’s counsel’s office.

Charlie Williams was the top lobbyist in New York for Time Warner Cable and then Charter Communications. Prior to that, he worked for Senate Republicans. Lauren Melendez was a senior analyst with Senate Finance; she is now deputy secretary for transportation. In September, Maria LoGiudice was hired as assistant deputy secretary for public safety, a key job with coverage areas from homeland security and corrections to the State Police; she worked for years as a top official with Senate Finance.

Others who made their way to Cuomo from the Senate GOP in the past year or two include Megan Baldwin, who was tapped as a senior health adviser; and Joanne Fogerty, who also worked for Senate Finance and in the Cuomo administration has been the Medicaid managed care team leader in Mujica’s office.

The Buffalo News, through Cuomo’s press office, sought comments from any of the hires. None would comment.

Anger from some Dems

Lawmakers say the hiring has created an interesting situation for top staff negotiators working for the Democratic-run Legislature. With 374 bills that passed in the 2019 session still not acted on by Cuomo and with a Dec. 31 deadline approaching, the new Democratic Senate counsel’s staff finds itself negotiating bills with people who in the previous session ran the Senate office under Republicans.

Lobbying reports show the influence of these staffers. In a recent public filing, one of the lobbying companies for Bird Rides, the California electric scooter company trying to get Cuomo to sign pending legislation legalizing the devices in New York State, reported it directly lobbied three people: Garvey, Midey as well as the bill’s sponsor, Sen. Jessica Ramos.

Privately, many lawmakers expressed considerable anger that Cuomo has turned to former Senate GOP staffers to help him run the government. Some of these are the same Democratic lawmakers who have long been upset with Cuomo that he helped prop up Republicans in the Senate for so many years. Some said they are also concerned that staffers who formerly worked with the Senate’s Independent Democratic Conference, a small group of Senate Democrats who struck a deal to help keep the GOP in control of the Senate until last year, have joined the governor’s administration. 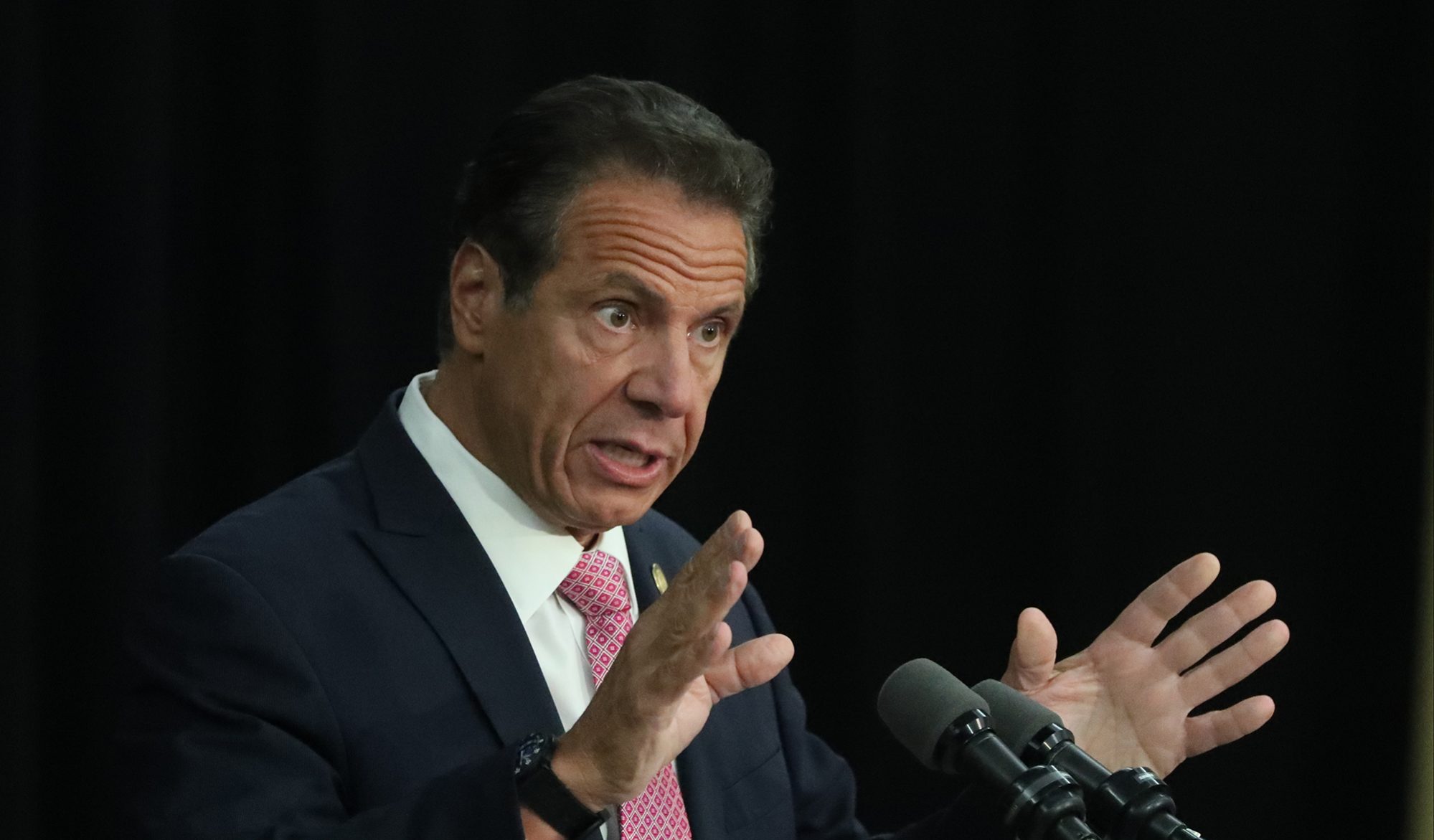 Cuomo has long praised his ability to work across the aisle and, what’s more, he got many centrist bills passed in his first two terms – such as a property tax cap – that would have been a far more difficult lift without the Republicans controlling the Senate at the time.

With so many bills left to be acted on, and a new session starting in January in an election year for all state lawmakers next year, a number of legislators said they weren’t about to take on Cuomo in public over his hiring decisions.

In fact, the two top Democrats in the Legislature – Senate Majority Leader Andrea Stewart-Cousins and Assembly Speaker Carl Heastie – declined comment for this story. So, too, did Flanagan, the Senate GOP leader.

Speaking on condition their names not be used, some Democrats were sharply critical of Cuomo. “If there was any doubt that Andrew Cuomo and Senate Republicans were part of the same organization, this should make it clear. It’s always been that way," said one Albany insider.

One lawmaker who has not been shy about criticizing the governor on matters is Assemblyman Thomas Abinanti, a Westchester County Democrat. “Most are quite competent who share the governor’s right-of-center philosophy," he said of the staffers Cuomo has hired from the Senate GOP.

“The governor’s rhetoric comes from the left, but his governing style is right of center. They, like the governor, believe in preserving and accumulating power and not alienating the rich and powerful,’’ added Abinanti, who is exploring a congressional run for the downstate seat being vacated by Rep. Nita Lowey.

Hiring moves criticized on the left

Left-leaning groups say Cuomo’s hiring decisions are being talked about in and outside Albany. “Grassroots activists are outraged, particularly at a time when there is a resurgence in progressive policy ideas on the left,’’ said Michael Kink, executive director of the Strong Economy for All Coalition, a group whose members include community organizations and unions.

Kink said he finds it “outrageous that the self-appointed progressive champion would double down on Republican staffers,’’ some of whom during their Senate service pushed policies sharply opposed by Democrats. “I understand that lawmakers would be reluctant to call out the governor, but it’s a problem for lawmakers, activists and anyone who wants to see progressive policies moving forward in New York,’’ added Kink, who has also served as a senior staffer to Senate Democrats.

The Cuomo administration dismissed any such suggestions. “No one can seriously argue that our agenda has gotten less progressive and less ambitious over the years, not even those who live in the darkest, dumbest corners of Twitter,’’ said Azzopardi, the Cuomo senior adviser.

One top lawmaker suggested it’s not Cuomo who had to change his views. “I don’t know that they can still have the same principles and values that they had previously,’’ Assembly Majority Leader Crystal Peoples-Stokes, a Buffalo Democrat, said of the people Cuomo hired from the Senate GOP.

The lawmaker believes the situation that has Democratic staffers having to negotiate with Cuomo staffers who once were loyal to GOP lawmakers “should be OK.’’

Besides, Peoples-Stokes added, lawmakers probably shouldn’t really involve themselves in the governor’s hiring policies. “I think our (Assembly Democratic) conference wouldn’t want the governor telling us who to hire,’’ she said.