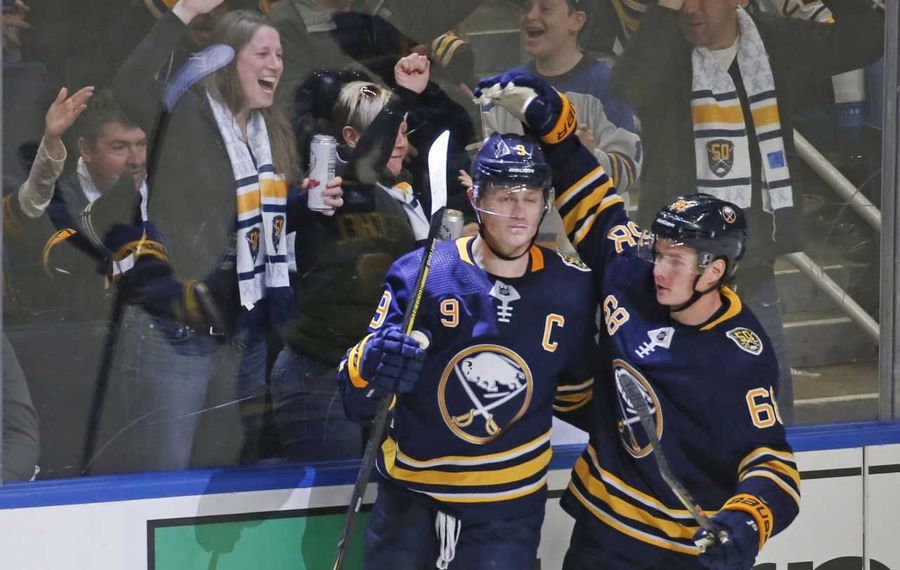 There comes a time when a star player says enough is enough. Both for himself and his team. It seems like that's what Eichel did Saturday night.

Eichel won a game for his team on his own. It was Eichel 4, Ottawa Senators 2 in exactly the kind of performance the Buffalo Sabres needed at exactly the right time.

It was the Sabres' first four-goal game since Thomas Vanek burned the Sens in 2010. It joined Miroslav Satan's 2004 effort against Atlanta as the only ones in KeyBank Center's 24 seasons. It was the fourth in the NHL this season.

And when it was over, Eichel wasn't much for talking about himself.

Eichel was moving his feet so well and was flying through the neutral zone with such impunity that it was natural to ask him if he was particularly amped up for this game.

That was my question. His answer went 57 seconds. He never talked about himself. You have to love that from your captain.

"I think we were just desperate and as much as we didn't play a good game, we found a way to win," said Eichel, who went on to riff about the team's turnover troubles, Linus Ullmark's huge saves, Rasmus Asplund's rock-solid NHL debut and the need for the team to keep finding ways to play a "cleaner" game.

Eichel entered Saturday with one goal in the last five games, and that was his last-minute, garbage-time tally on the second night in Sweden against Tampa Bay. He's been passing the puck far too much and old friend Matt Moulson, now playing at Hershey in the AHL, told him so in a text Friday.

For all of the guffaws Buffalo fans had about Moulson's contract, the guy is a multi-time 30-goal scorer in the NHL -- something Eichel has never done.

Eichel unleashed some lasers in this one, scoring his four goals on only five shots. The game-winning goal with 7:47 left in the third period was particularly impressive as Eichel turned on the jets through the neutral zone and burned poor Craig Anderson with his whipping wrist shot.

The acceleration through the neutral zone makes the play. https://t.co/3V7QAuFZxw

"Jack showed a world-class performance today," said coach Ralph Krueger. "Just excellent leadership, like he's also been showing in all the adversity of the last few weeks. It's really probably the fruit of all of that attitude he's had came out in the goals tonight."

Love the leadership part too. The Sabres benched Rasmus Dahlin for the final 22 minutes of this one. Parked him in the middle of the bench and never moved him. And Eichel was seen with his arm around him chewing his ear off to keep his spirits up.

"'Ras' is an unbelievable player, such an important part of our team. The pressure and the expectations and everything that comes with being Rasmus Dahlin is not easy," Eichel said. "Just the way he handles himself every day is incredible to see. You're gonna go through tough times. Everything is not butterflies and everything is not always easy.

"He's a tremendous player. He's a tremendous person. He works hard. He cares so much about this game and this team. I expect him to bounce back in a big way. He's such an important part of our success moving forward. He's going to be fine. I don't think anybody should worry about him."

Krueger concurred but wasn't going into much detail on his decision which, in fairness, was probably overdue.

"It's certainly sometimes wanting too much maybe, finding the balance between his amazing genius and skill and what we need when," Krueger said of Dahlin. "He'll improve from it but tonight's really about Jack Eichel and the game he played and the team performance."

The Sabres are still a major work in progress. The power play is in an 0-for-14 slump the last six games. The penalty kill is just 7 for 13 in the last four games.

"I still think there's a lot of room for improvement," said Jeff Skinner.

Asked what, Skinner said, "Maybe somebody else score a goal?"

He was only half joking. The Sabres remain woefully imbalanced offensively, with Eichel now at 12 goals, Skinner and Sam Reinhart at eight and Victor Olofsson at seven. Conversey, old friend Tyler Ennis scored his fifth of the year for Ottawa -- or equal the total of Jimmy Vesey, Zemgus Girgensons, Kyle Okposo, Evan Rodrigues and Conor Sheary.

The Sabres profited from a soft October schedule but they took advantage of it, too. November started and things got quite a bit tougher. The first five games were Washington, New York Islanders, Tampa Bay, Tampa Bay and Carolina. That was going to be tough and 0-4-1 proved it.

Saturday's game started a much softer three-game stretch with Ottawa, Chicago and hapless Minnesota. Five or six points are really needed to get some equilibrium back. Especially when you consider the next six games after that: Boston, Florida, Tampa Bay, Calgary, Toronto, Toronto.

That's why key players making big plays was what was needed. Eichel said it was probably his first four-goal game since his days with the Boston Jr. Bruins as a 13- or 14-year-old.

But with the Ottawa net empty, Eichel's eyes weren't saucer-wide thinking about a notch in his book. Captains have to think about the bigger picture.

Said Eichel: "You're just worried about trying to hold them off there and find a way to win a game."