Stinson, the Hamilton-based developer who owns the former Adam's Mark Hotel, is buying the vacant Fougeron Street factory that once produced the legendary bread with the idea to turn it into 500 apartments, stores and commercial space.

That's a major gamble on a neighborhood that hasn't seen much risk-taking in years. But he's planning to bring it back to life in a big way, with a host of apartments occupying the upper floors, as well as ground-floor retail space and underground parking. And he intends to construct a second matching building on the rest of the site, giving it the scale he says it needs.

"I think people underestimate the market down here. It needs scale," he said. "I don’t think you can go small in an area that’s questionable. You have to do something that gets people’s attention ... It'll become its own little destination."

He compared it to the risk that Howard Zemsky took when he and his partners purchased and redeveloped the Larkin at Exchange Building and kick-started what has become the Larkinville neighborhood.

"It was a gamble. But I think he did the right things, because it created a destination," Stinson said. "If he did a little office building to see if it would work, it wouldn’t work. But because it was so massive, it became self-fulfilling."

Stinson is renovating and upgrading the renamed Buffalo Grand Hotel, with 484 rooms, a 600-seat restaurant and 72,000 square feet of meeting space. That's been a challenge for him, because it's not just an empty building but an active operating business, with employees and guests.

He also plans to add a wedding chapel to the front of the hotel, based on Frank Lloyd Wright designs, while looking at ways to expand the event space, in order to to draw in more business.

Even so, Stinson says he's not spreading himself too thin by adding the Wonder Bread factory. "I’m going to take my time," he said. "The hotel is the priority right now. It certainly has taken its twists and turns."

The Wonder Bread factory is currently owned by George Smilanich, but Stinson said he has it under contract, and was supposed to have closed on the purchase by now. He would not disclose the purchase price yet, but said it's "well under" $1 million. It had been listed by broker Rick Recckio for $899,000. 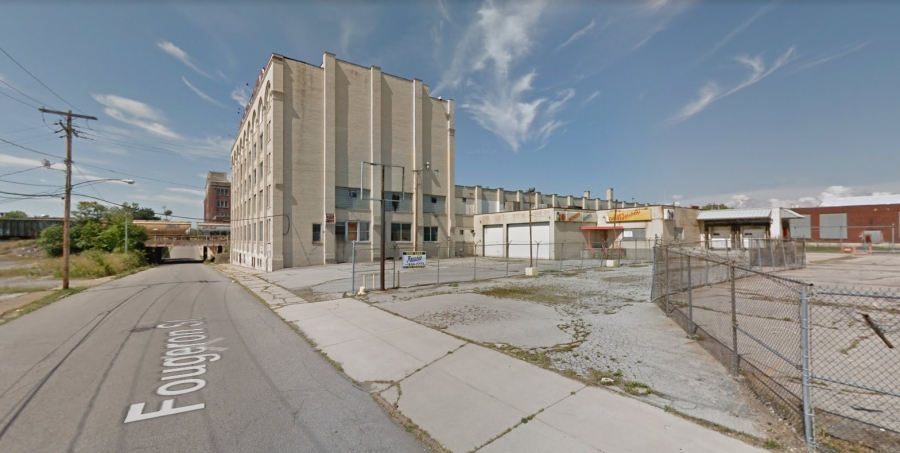 The expansive Wonder Bread factory site on the East Side. (Google)

Located at 313-356 Fougeron St., the cavernous five-story hulk sits on nearly 3 acres of land, connected to a shorter two-story building that extends further back on the sprawling property. A tall smokestack juts into the sky. The rest of the property is fenced in.

Built in 1923, the 198,600-square-foot, steel reinforced concrete building was once a staple of the East Side, with its enormous first-floor ovens that cast a smell of baking bread throughout the neighborhood. Vacant and virtually abandoned since it closed in 2004, the blond-brick building has decayed over the years, with three of the giant letters along the roofline having since disappeared.

But it still features Roman arch windows at the fifth floor, as well as tall ceilings, large windows and an open layout that makes it suitable for reuse. The basement and first two floors each have 53,200 square feet of space, while the upper floors are 13,000 square feet each, and the building still has 12 truck doors and two 4,000-pound freight elevators.

Stinson is baking those features into his plans for a "residential-commercial village," which tentatively include more than 500 new apartments, ground-level retail or commercial space, a marketplace and "definitely some hospitality elements."

The building also has two levels of underground space where the loading ramps were, and Stinson plans to convert that into parking, while extending it across the land to the new building as well. That will generate about 300 parking spaces, he estimated.

"You'll have indoor, underground parking in a loft building," he said. "That will be unusual. And that's critical to it, because the people living there are going to drive."

The total cost of the project will likely exceed $50 million, he projected. Specific elements of the design are still in flux, and Stinson said he expects about a year of consultation with neighbors and others – "just figuring out the logistics of it" – before any physical work happens, other than cleaning it out and stabilizing it.

"I’m not going to walk in there and say I have the miracle design done. I don’t," he said. "And I have the hotel, which is a giant challenge on its own. That’s got a year’s worth of work. It’s still in the early phases of makeover."