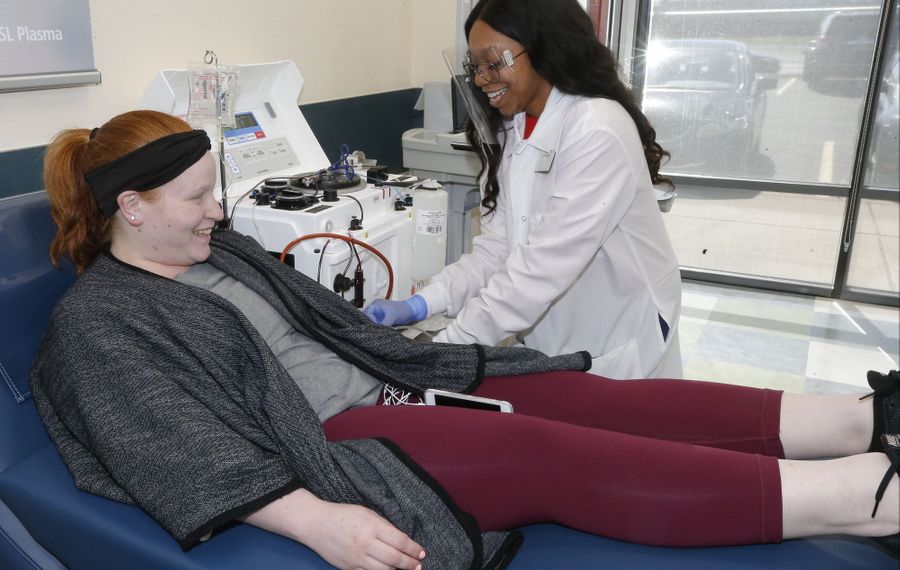 “I like helping people and I wanted a way to do it,” said Downer, a health and human services major from Newburgh in her senior year at the University at Buffalo.

The 21-year-old student found a slightly different way to fulfill that mission this year – and get paid. A friend told her about CSL Plasma, a private company expanding rapidly around the world and in need of more plasma, the vital component in its life-preserving medications.

Downer has rolled up her sleeve twice a month since February, when CSL opened its first site in the region, in North Buffalo. She got $50 for each of her first five visits and has received $25 every time since, money she has used to pay bills and buy groceries.

CSL opened a plasma collection center several weeks ago in Cheektowaga and will open others soon in Lackawanna and Niagara Falls, adding a competitive twist to blood procurement in a region where the demand for blood often comes precariously close to the available supply.

“I'm nervous that this will impact us,” added Amanda Farrell, director of blood donor recruitment with ConnectLife (formerly Unyts).

Regional and national blood bank leaders told The Buffalo News that nobody has tried to measure the direct impact of plasma centers on blood donations. It would be hard to tease that out, they said, from factors that include donors with busy lives and lots of options for their time and resources.

Regardless, five major players in the region want your blood to help others, and a critical time of year approaches. December, January and July – when many people focus on holidays or vacations, and many college students are away during school breaks – tend to be the most desperate of times.

Instead of focusing on competition, traditional players in the region have used announcements of new plasma centers as an opportunity to differentiate their efforts in ways that will give the public a greater understanding of the important work – and needs – that come with preserving a healthy local blood supply.

“The biggest difference in the message that we try to bring home when we're looking for more donors is that our docs in the ER at ECMC are only as good as the blood they have on the shelves to save patients,” Farrell said, “and that's an important message that people need to know about.” 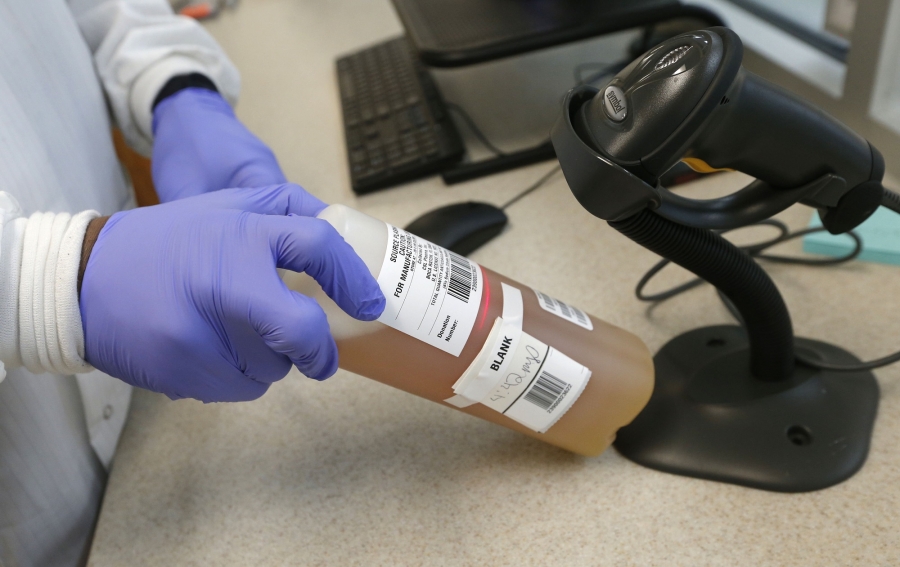 Processing technician Daymion Diggs, scans a fresh bottle of donated plasma at the CSL Plasma collection center in North Buffalo, the first of four of its kind planned in the region. (Robert Kirkham/Buffalo News)

In the business of blood, plasma is easier to secure.

The Red Cross and ConnectLife accept mostly whole blood, which by federal law must be donated by someone no more often than once every 56 days, or six times a year. Platelets can be donated once a week but no more than 24 times a year.

In contrast, plasma can be extracted as often as twice a week – 104 times a year – through a process called apheresis, in which blood is removed from the body, the plasma separated and kept, and the red cells, platelets and other material returned in a saline solution. Blood regeneration happens much more quickly this way.

Federal law allows those who harvest plasma to pay for collections used to make medications. Blood provided for infusions must be donated.

To be sure, all major blood components are vital. Whole blood is paramount for trauma and critical care; platelets for treatment of cancer, chronic disease and traumatic injuries; and plasma for use in rabies vaccinations, and drugs to treat tetanus, autoimmune conditions and blood diseases.

The American Red Cross collects about 13,000 units of whole blood daily – 40% of the supply – and provides it to hospitals across the nation. That includes blood used by Catholic Health hospitals in Western New York. Only when those regional needs are met does the Red Cross move donations elsewhere.

“Our job is to provide a safe, secure, low-cost blood product to our hospitals,” Farrell said.

Western New York also has played a critical role for more than three decades when it comes to collecting plasma to treat mothers with Rh negative blood types carrying babies with Rh positive blood types. Kedplasma Somerset Labs in Amherst has collected plasma from those who are Rh negative – about 15% of the population – to make RhoGAM, the first, and still leading vaccine to prevent stillbirths from a related condition called hemolytic disease.

If RhoGAM saved your baby, you can thank plasma donors in WNY

Roswell Park Comprehensive Cancer Center runs its own donor center to collect platelets for patients with leukemia, receiving chemotherapy or undergoing bone marrow transplants, and whole blood to boost the strength of patients who are weak or anemic.

CSL Plasma is open to those of any blood type who wish to provide their plasma.

The company, headquartered in Boca Raton, Fla., operates more than 230 plasma collection centers in U.S., Europe and China. It employs more than 12,000 workers. It is a subsidiary of CSL Behring, a global biotherapeutics outfit based in Melbourne, Australia.

Donations in the U.S. are steered to a plasma protein biotherapies company under the same corporate umbrella in King of Prussia, Pa., for the medication manufacturing process.

The regional arrival of CSL set up a dynamic that has grown more common in the U.S. since 2005, when there were 300 plasma procurement sites across the country. That number has since doubled to meet demand, according to the Plasma Protein Therapeutics Association.

Such growth can generate lots of green. Market analysts estimate related therapeutic sales in the U.S. will climb from $5 billion in 2000 to more than $30 billion by 2024.

“Because plasma can be a medical necessity, companies that collect it tend to wield significant pricing power,” H. Luke Shaefer, associate professor at the University of Michigan School of Social Work and the Gerald R. Ford School of Public Policy, wrote last year in The Atlantic. “These days, a liter of plasma that costs a company about $150 to collect and process could sell for in the neighborhood of $500 – a substantial markup in any industry.” 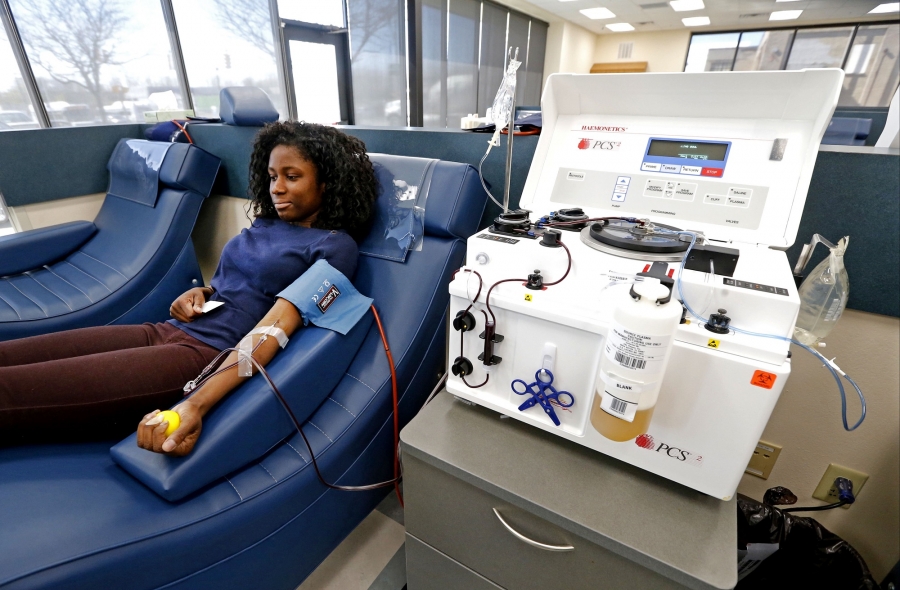 University at Buffalo student Dee Downer of Newburgh, was paid $50 for each of her first five visits to CSL Plasma and $25 for each of them since, based on her weight. Those who are heavier tend to get paid more, as much as $35. (Robert Kirkham/Buffalo News)

Plasma, a yellow liquid, contains proteins critical for clotting and immunity. A transfusion of it can help burn, trauma and clotting factor deficiency patients.

Medications made with it can help those with hemophilia, respiratory and autoimmune diseases, and who have undergone organ transplants. Making those drugs can pose great challenges. CSL estimates 130 plasma units are needed to treat one patient with Primary Immune Deficiency.

Those age 16 – with parental consent – as well as almost anyone 17 and older, and in good health, can donate whole blood. They must weigh 110 pounds or more to do so, or at least 120 pounds to donate platelets.

“We have donors in their 80s,” said Corvaia, of the Red Cross. “They've been giving all their life and look forward to donating blood.”

CSL Plasma sets different parameters. Those who provide plasma must be 18 to 64 in age and in good health, said Carol Palaszewski, assistant manager at the North Buffalo center. Anyone who has donated whole blood has to wait at least 56 days to provide plasma, she said.

“We encourage our donors to have a lot of fluids, preferably water, and protein prior to donating,” she said.

The process to provide blood or its components for the first time is pretty standard. Patients answer a health questionnaire. A health professional then takes vital signs and asks more questions designed to protect the safety of the blood provider and safeguard the blood supply. Blood is then drawn.

Nurses handle the preparations and phlebotomists the procurement process at CSL, where the first visit tends to last a little over two hours and subsequent visits about 80 minutes, said North Buffalo office manager Nick Liberati.

That contrasts with whole blood extraction, which generally takes an hour or less, though platelet extraction takes about two hours using a process similar to plasma collection.

CSL Plasma touts in its rack cards – which have become common across the region, including on college campuses – that “giving has its rewards” of up to $300 or $400 a month when incentives are included.

To be sure, however, the staff, Downer and Katelyn Rychnowski are among those who also feel good about helping others as part of CSL efforts.

“I had a family friend who had leukemia so I always donated blood and then a girlfriend started going to CSL and referred me,” said Rychnowski, 23, of Amherst, a sophomore in the UB respiratory therapy program who started donating plasma earlier this year.

She found the North Buffalo center while doing an online search for blood donation.

Rychnowski felt good about providing plasma for lifesaving and life-preserving medications, as well as the chance to use her payments for student loan debt and a cruise next year with her boyfriend.

Over time, she learned that her veins didn’t hold up so well for the slightly larger needle used to collect plasma, so she stopped.

CSL since helped her in another way, giving her a job as a phlebotomist in its new Cheektowaga office, an opportunity that works better in her schedule and pays more than her previous part-time post as a certified nursing assistant. 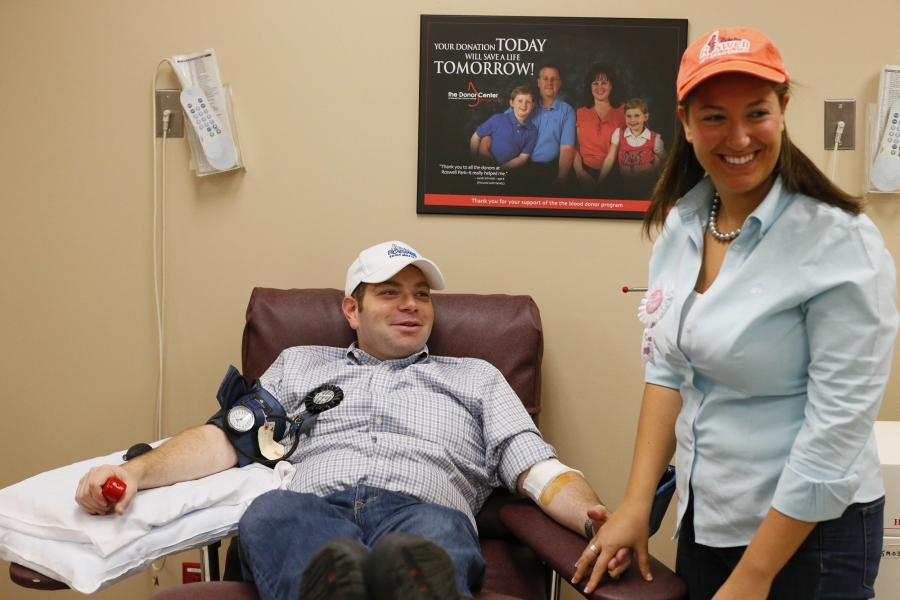 At least five enterprises in the region – two private and three nonprofit – want your blood to save and preserve the lives of others. Here’s a snapshot.

Where: Chief blood donation center at 3601 Union Road, Cheektowaga; new one at the Boulevard Mall, 730 Alberta Drive, Amherst. Also collects whole blood donations at schools, businesses and other community settings across the region.

Blood donor app: Allows you to find local blood drives, sign up to donate and learn what hospital used the blood to help a patient. Sign up at the app store on your smartphone or redcrossblood.org/blood-donor-app.

Where: Donation centers in the Eastern Hills Mall, 4545 Transit Road, Clarence; 96 Niagara St., City of Tonawanda; and the Southgate Plaza, 984 Union Road, West Seneca. About 70% of donations are collected at schools, businesses and other community settings across the region.

Where: On the ground floor of the main hospital, Elm and Carlton streets.

What: International company that pays for plasma donations to make medications that help those with hemophilia, respiratory and autoimmune diseases, and who have undergone organ transplants.

Sign up: cslplasma.com or on-site. Those who provide plasma are paid.

What: Part of an international company that collects plasma at 18 centers across the U.S. from those with Rh negative blood – 10%-15% of the population – to make the leading vaccine to prevent stillbirths from a condition called hemolytic disease.

Sign up: kedplasma.us/somerset-laboratories, 631-1281. Those who provide plasma are paid.