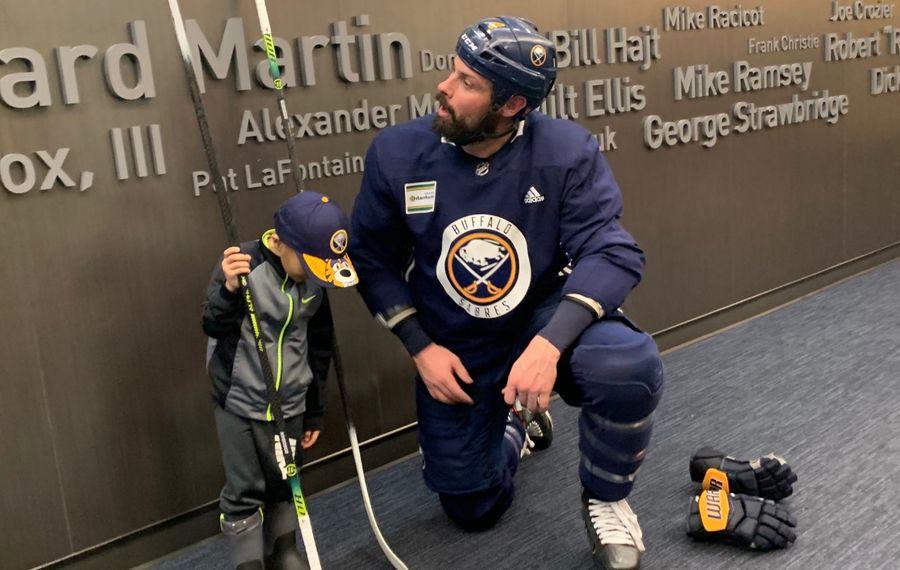 Bogosian, a 29-year-old defenseman working his way back from hip surgery, stopped to chat with Andre outside the Buffalo Sabres' dressing room for several minutes following a rigorous practice inside KeyBank Center. Bogosian asked for a towel to wipe the ice off the blade of one of his sticks, borrowed a marker from Rich and, at the boy's request, signed, "To Andre the Warrior."

Andre, who recently moved back to Buffalo from Port St. Lucie., Fla., was diagnosed around Labor Day with stage three nephroblastoma, a rare kidney cancer that primarily affects children. He and another boy, 14-year-old Emmett Jakubowski, were invited by Roswell Park Comprehensive Cancer Center to watch the Sabres practice and meet the players ahead of Hockey Fights Cancer night Saturday. Andre will drop the ceremonial faceoff for the game against the Ottawa Senators and Emmett will attend the festivities. Emmett, whose leukemia has been in remission for almost three years, dropped the ceremonial puck on Hockey Fights Cancer night last November.

"This is a great distraction," Sanders said. "I’ve met some of the players out in the community before and they’ve always been nice guys. When they take the time like Zach Bogosian, to sit here for 10 minutes with Andre, just talking to him, it’s a welcome distraction from everything he’s dealing with."

The Sabres smiled when coach Ralph Krueger introduced their guests following practice. The visit provided perspective amid a six-game losing streak, goalie Linus Ullmark said. After all, their recent problems on the ice pale in comparison to what Andre, Emmett and their families have endured.

"This isn't about one game," Ullmark said. "There’s always going to be kids out there watching. We always want to show our very best every night. It’s a special thing on the side of the game, but we’re going to go out there and play our best. That’s what we always do. That’s what these kids do every day. They’re battling their hardest.

"Whenever these things are going on, it makes us stop and think a little bit extra about how lucky you are and fortunate you are that you aren’t battling this unfortunate disease."

The National Hockey League and its players' association started the Hockey Fights Cancer initiative in 1998 as a way to raise money and awareness for cancer patients. Each team raises awareness before and during one November game each season to benefit cancer research. In addition to wearing lavender jerseys and using lavender stick tape during warmups, the Sabres are raising money through raffles and auctions with proceeds donated to Roswell Park Comprehensive Cancer Center.

The Sabres Foundation, in conjunction with Roswell Park, also offers a unique experience to cancer patients each season. The boys were greeted by coaches, players and General Manager Jason Botterill while standing outside the Sabres' dressing room.

We are lucky to have Andre and Emmett from @RoswellPark join us at practice today! #Sabres50 | #HockeyFightsCancer pic.twitter.com/fXbRcZEBn6

Emmett held up a hockey stick gifted to him by Sam Reinhart and admitted to Bogosian that his favorite player is former Sabres forward Tyler Ennis, who will be in KeyBank Center on Saturday as a member of the Senators.

"It does bring back some memories, but it’s nice to meet some new players and some of the old," Emmett, a South Buffalo resident, said. "To get to see people I know and be happy, not think about stuff I’ve been through."

Andre, meanwhile, pushed Bogosian's hockey stick along the carpet like it was a vacuum cleaner. His battle has just begun.

Andre has undergone chemotherapy and radiation treatments for six weeks and has 27 more weeks to go. He had his appendix removed following bouts with nausea and vomiting, only for the family to learn that doctors discovered a tumor on his kidney. His parents, Rich and Alexandra, a former oncology nurse at Roswell Park, hope to start a foundation to raise awareness and money for families confronted with a similar situation.

"It was really good to see them and have a chat with them," Krueger said of Andre and Emmett. "We’ll touch base and I think Hockey Fights Cancer is an unbelievable cause that we’re all very passionate about supporting. To see the reality of the challenges those families have right now we can only hope that the support we’re giving them gives them power to deal with that very difficult adversity, which is a lot different than what we’re dealing with."

For the past two years, Ullmark, 26, has been involved with Aja Baja Cancer, a foundation in Sweden dedicated to raising money and awareness for pediatric cancer. He visits patients in hospitals every summer and attends events such as charitable golf outings. When the Sabres were in Stockholm last week for the NHL Global Series, Ullmark was visited at Ericsson Globe by a 4-year-old boy named Hugo, who is battling cancer.

Hugo put on Ullmark's mask, glove and blocker for a photo posted on the foundation's Instagram account. In conjunction with Hockey Fights Cancer night, Ullmark will wear a lavender-painted mask that honors Aja Baja Cancer on the back and features a cancer ribbon. Sabres goalie Carter Hutton also had a mask custom-painted for the night. He did not wear it during practice, though, indicating Ullmark could start Saturday against Ottawa.

"I’m trying to learn as much as possible about every case, everything that’s going on out there regarding research and stuff like that," Ullmark said. "When we were in Sweden I met a couple of really good kids who told me about their situation. Anything can happen. I met a kid who was the second person in the whole world who had his disease. That sort of thing blows your mind. It hits close to home whenever there is a young boy that gets you thinking about your own kid."

While players and coaches convened for a team meeting, the two boys were still standing in the hallway admiring their gifts, including a puck signed by Reinhart, Jack Eichel, Victor Olofsson and Jeff Skinner. Though the Sabres' gesture offered a respite, Andre and Emmett also made an impact on the players, coaches and team personnel during the chaotic 82-game season.

"It’s the best part of the job, it really is," Rich Jureller, vice president of community relations and president of the Sabres Foundation, said. "Work is great and all the community stuff we do is rewarding, but to see this is the coolest part. It takes you back when you were 4 years old. To realize what Emmett has gone through and what Andre is in the middle of going through, it really means a lot. It’s cool to see the team, coaches and players, be as warm and inviting. There’s not a lot of down time, so for them to make time for stuff like this is really cool."

Center Rasmus Asplund was recalled from Rochester on Friday morning and practiced with the Sabres in preparation for their game Saturday night against the Senators. Asplund centered a line that included Zemgus Girgensons and Kyle Okposo.

Center Johan Larsson did not practice Friday and is day-to-day with an upper-body injury, Krueger said. Larsson will be evaluated Saturday morning and has not been ruled out for the game. Asplund, 21, had one goal among eight points in 13 games with the Amerks this season.

"We found that he worked really well early on in training camp, the [Marcus] Johansson-[Victor] Olofsson-Asplund line really, I think, impressed everybody," Krueger said of Asplund. "Then his ability to move to wing, center, his penalty-killing ability and overall what he’s been doing since he’s come here from Sweden and the work that he’s doing in Rochester confirmed what we saw in training camp, that he’s somebody that can help us in multiple roles. If we need him tomorrow, he would be ready to jump in."