After nine games, the veteran center still sees a good deal of work ahead for a group with four new starters, including him.

"I think it's an ongoing process, right?" Morse said. "It's something that, unfortunately, you'll never be able to master, but something that you definitely can close the gaps on. I feel like we've done that, to a certain extent."

With a 6-3 record entering their game against the Miami Dolphins Sunday, the Bills have done their share of gap-closing throughout the team. After last weekend's loss at Cleveland, there are concerns about whether they've taken the necessary steps to reach the playoffs, particularly with a scoring-challenged offense.

Morse, a former member of the Kansas City Chiefs who after becoming a free agent last March signed a four-year contract with the Bills worth $44.5 million, understands the line's role in the struggles. As the player in whom the Bills made the largest financial investment in the offseason, he feels a greater responsibility to help make it right.

"I definitely think there's some room for improvement on my end, for sure, just helping the guys out with their responsibilities by being more communicative and just being more precise in my communication," he said. "For the most part, knock on wood, we've had a pretty healthy group of guys and that helps a lot with that cohesiveness."

One of the Bills' other new starters, right guard Jon Feliciano, was struck by the amount of time Morse spent working him and left guard Quinton Spain, another new first-stringer, in the meeting room and other nonpractice and nongame situations during Morse's lengthy preseason recovery from a concussion. 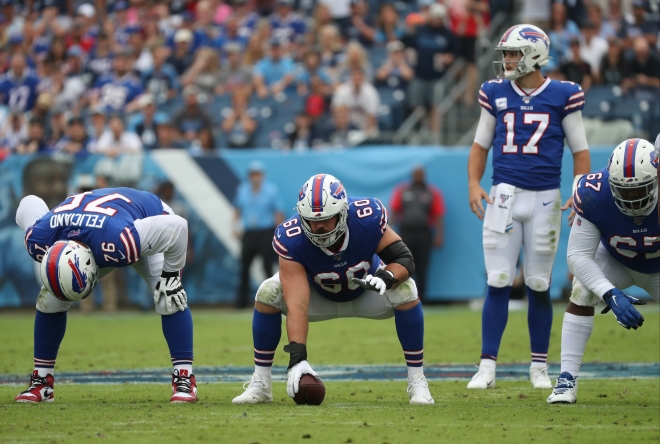 "We were able to talk about the reps that we weren't getting (together)," Feliciano said. "We were able to get mental reps and that was a credit to him, because he would always come up to me or (Spain) or anyone and just try to do the things that he couldn't do (physically) because of his injury at the time.

"He's just all about business. I played with a lot of great centers. I played with (Jacksonville's) Brandon Linder (at the University of Miami), I played with Rodney Hudson (in Oakland). Mitch is right up there with them. He's one of the best at pulling around and blocking on the second level. I think that's probably one of his best strengths."

In the latest edition of One-on-One Coverage, The Buffalo News spoke with Morse about what goes into building chemistry with his linemates, his own development, the impact of missing so much time with a concussion suffered in training camp, Josh Allen, the Bills' running backs and the Dolphins' game.

Buffalo News: What are the signs you look for that tell you the cohesion is growing?

Mitch Morse: I think less (verbal) communication, but, at the same time, still being able to portray the right information, little nuances on how guys play, just understanding each other's technique and working together instead of against each other, especially in the run game and stuff. So it's definitely exciting, but we have a lot of work to do. I think, for us, it's more of a sense of urgency rather than a sense of panic.

BN: How do you feel it has gone for you, individually?

MM: When I actually was able to play football, I think there was definitely a growing period in regards to getting back physically into it and then, mentally, into a new offense. That's still something I'm working on. But I feel like it's slow and steady, but progressing each week and just trying to be the best teammate I can to my guys.

BN: Although you were ready to play once the regular season began, was missing all that time in training camp and the preseason more of a setback than some of us even realized?

MM: I definitely get confidence by playing. And when you don't get those reps of the plays you understand conceptually, but in the thick of it, it's a whole different deal. It was more of a mental strain on myself. It was kind of a crummy deal.

It took a lot out of me just as a teammate. And then, yeah, there was definitely a growing period where I had to get back out there and strap it up and get back. It was definitely a bump in the road, but something we were able to close the gap on.

BN: How important was the support from family and friends during that time?

MM: I turned to my teammates, turned to my coaches, turned to my family, for sure – people I trust. I do have a very good support system, a great rock foundation that I'm very fortunate to have that I know a lot of guys don't have. So I leaned on them big time because I wasn't strong enough to do it on my own. They got me out a lot of ruts on certain days, so I owe them a lot.

BN: What was the transition from the Chiefs to the Bills like as far as adjusting to a new scheme, as well as new teammates and coaches?

MM: I think you just understand the nuances of each practice, what coaches are looking for. The technique's different, depending on the O-line coach or the offensive coordinator, different schemes. We were more of a West Coast offense (compared to) what we're doing here. There's a lot – just different routines, different environment, so you definitely had to work on the mental aspect as much as the physical aspects of my life. That's been a challenge but one that I've met because of the people I've been around and they've helped me out.

BN: How does the Bills' blocking scheme differ from the one you were in with the Chiefs?

MM: I think just attacking. The footwork is just different. It's just very different in the run aspects. I can't give specifics (for competitive reasons), but it's definitely something I've had to work on. This is a very downhill, A-gap, B-gap team, compared to where I was, which was a very zone-oriented team. Not that we don't do that here, but there's a lot more base personnel here and a lot of probably more old-school football here and that requires some different footwork sometimes.

BN: What are your observations of Josh Allen's performance?

MM: An ultra-competitive individual who loves his teammates, loves the competition of it all and really wants to put his best foot forward for his guys and his organization. And that's all I can ask for in my quarterback and really cares about us on a personal level, which, in turn, you really care for the guy. It's been great to see him grow. I think we've all grown together and it's been it's been a lot of fun.

BN: Does he turn to you for advice?

MM: It's nothing big. It's not like we've had some big Kumbaya session. Just little intricacies here and there, what I see sometimes, I ask what he sees. We're not trying to solve the world's problems, by any means, but we've definitely taken a step forward in communication and that's been really kind of fun. I think there's a lot of room for improvement in that department as well. 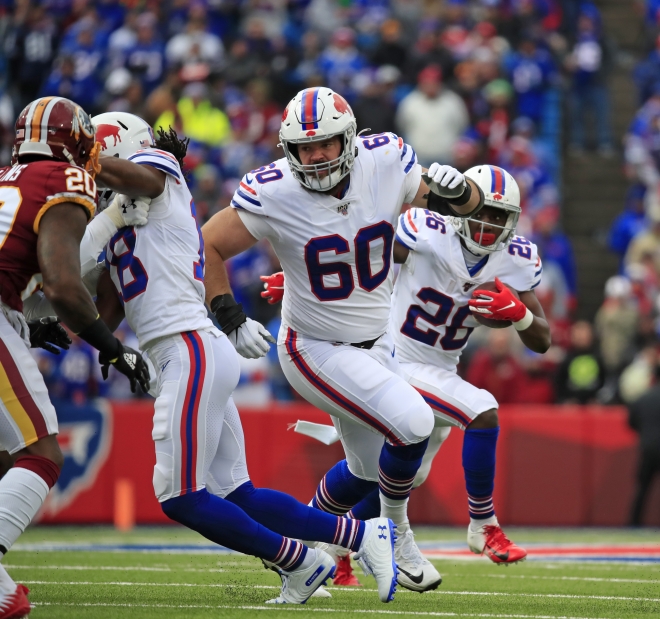 BN: How remarkable is it to see Frank Gore, at 36 years old, still going strong?

MM: It really is something to see. I've been very fortunate to be with Frank these last few months and to see how he's just wired. When he's at work, he's immersed himself in football and he really cares about his craft and he puts the time in for his body. That's very impressive, in my opinion, and it pays out the amount of years he's played and just the production he's had even in year 15.

'I'd never bet against Frank Gore': 2001 Miami Hurricanes on an all-time great

BN: What are you impressions of Devin Singletary's play?

MM: I think he's a guy who's really kind of blossomed with Frank's guidance. He's in a really good room with some guys. He's got the nickname Motor for a reason. The guy just nonstop runs. That's fun to be a part of and it's fun to be a part of the infancy of his career. Seeing him get going here in these few games has been a lot of fun.

BN: Do you block differently for each guy because of the different running styles?

MM: You really don't even know which back is back there sometimes. You just kind of go and pick up whoever's on the ground.

BN: What's the relationship been like with your offensive line coach, Bobby Johnson?

MM: I think he's a guy who really cares about his group and a guy who will go to battle for his group. And it's very apparent in the way that he coaches, the passion he has for us. When things aren't going well, he doubles down on our group and really just has a fiery passion for the game. And it's fun to be a part of, the way he attacks every day and it's fun. It's just fun to be part of.

BN: You make your offseason home in Kansas City and you're a native of Austin, Texas, so what has adjusting to life in Buffalo been like for you and your wife?

MM: It's been a privilege thus far to be with a town that really cares for its team and a town that really takes in their team and the guys. This organization's very family oriented and that's something I can get behind and it's easy to really kind of cope with and veg with. So I've been very fortunate to be here with this team, in this locker room and hoping to continue that for some time.

BN: What has the response been locally to the sharing of your incredibly moving personal story, with your younger brother, Robbie, still dealing with the severe brain damage suffered when he was shaken by a babysitter?

MM: We've done a few things with the Special Olympics here. The story really resonates with that group and the families that kind of back that organization. And so, in that department, yes, but for the most part, it's just here and there, which is very nice.

BN: After last week's loss to an opponent that entered the game with only two wins, what sort of pressure is there entering another game against a two-win team?

MM: I think there's pressure every week. I think you see the box scores after every Sunday, there's no bad teams in the NFL. I mean, there's teams with some (losing) records, but the discrepancy between a winning team and a losing team is very slim.

For us, we don't take any games for granted. We know we're going to get a red-hot Miami team and for us, it's a very exciting challenge to go down in the heat. I think you double down on what you know works after a loss. For us, we know what we need to get fixed and we'll fix it.