Five years ago, what came to be known by some as the "Wall of Snow" came to be. It occurred in two rounds and was not just disruptive, but also devastating.

Thirteen people died, hundreds of roofs collapsed and thousands of people became stranded on the Thruway and other roads. (Something like this happened in 1945 in a lake-effect storm, when more than 70 inches fell in parts of Lancaster, but in the more recent era, the November storm of 2014 stands alone in many ways.)

This is what the Nov. 17-19, 2014, round looked like on National Weather Service Doppler radar.

What stands out about the intensity of the snowfall rates is the duration in place, when the band did not move for many hours.

I applied one of the most overblown terms I’ve ever uttered to describe that lack of movement: “stationarity.” Hey, when you’re doing one weather hit after another for hours, you try to keep it fresh, right? (It’s a real term.)

In any case, I had never seen such an intense band sit in place for so long a period before or since. As for intensity, ground truth and radar estimates indicated up to 6 inches per hour in the core of the band, with around 3 inches per hour closer to its northern edge, in South Buffalo.

As so often is the case with lake effect, outside the core of the band in North Buffalo I recall only about 4 inches fell at WIVB and in many of the Northtowns. Most of those 4 inches fell at the onset of the storm, when the developing band swung briefly north of the city after starting briefly south, before settling into its “stationarity” farther south.

“Thundersnow” was commonplace throughout the 15-to-20-mile-wide band, always indicative of extreme intensity. Thundersnow also tends to make meteorologists impossible to be around until we settle down. Here are the snow totals based on spotter and official reports, tabulated by the National Weather Service. 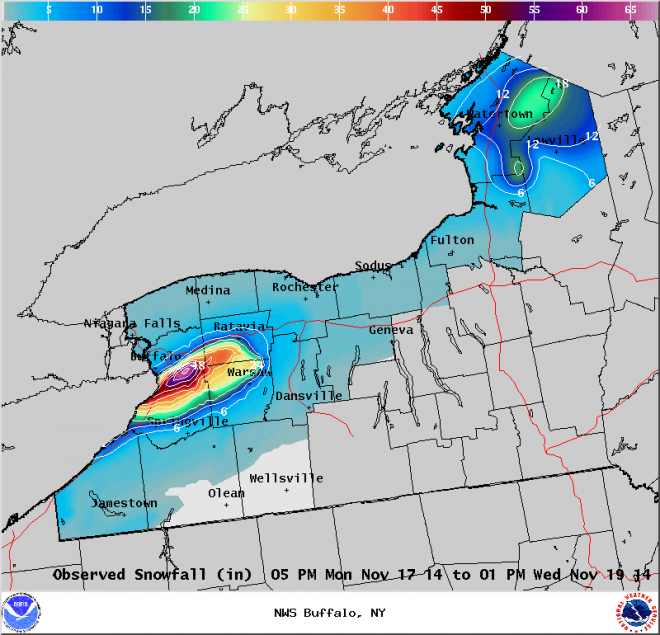 Those totals through 1 p.m. Nov. 19 don’t include the second round that quickly followed, delivering another 1-4 feet to some of the same locations pummeled by the first incredible deluge.

The Thruway was closed from the Pennsylvania line to Rochester, and the 190, 290 and 400 were closed as well. Close to South Buffalo, up to 48 inches fell by Nov. 20, and up to 7 feet fell in portions of the nearby Buffalo and more distant Erie County Southtowns, as well as in eastern suburbs such as Lancaster and Depew.

The Buffalo News reported the top 10 spotter measurements in the storm’s aftermath:

While the winds of this epic storm didn’t measure up to the Blizzards of '77 and '85, they were more than sufficient to produce whiteouts and severe drifting even at sub-blizzard speeds, making travel in the afflicted area impossible during the storm.

The meteorological setup was classic, and its potency was apparent days in advance in the models and upstream reports. This was not a surprise event in any sense, though models underdid the peak totals covering a small area. However, it was clear four days in advance this would be a paralyzing storm.

The weather service issued numerous statements days in advance of the enormity of the snow potential, as did local television meteorologists, including me. Need I tell you how much adrenaline flows in advance of what appears to be the ultimate whopper event? Even during the preceding weekend off, I recall tearing up the keyboard on my personal computer with frequent, detailed updates on social media. I’m sure I wasn’t unique among local meteorologists.

By the way, here is a weathercast I did just in advance of round 2. Somehow I kept the hyperventilation down to a low roar. With the help of high-resolution models and pattern recognition, I could make a very specific forecast with decent odds for success.

This is what the upper air pattern looked like as round 1 began. There is a warm ridge of high pressure over western North America, forcing the polar jet stream to go up and over it, tapping polar air, and delivering it to the Great Lakes and seasonably warm waters. Take my word for it – this is about as classic an upper air setup for big-time lake snow can get.

As for the surface map, with polar air already in place, the tight “packing” of the isobars and their orientation indicated a strong flow coming up the fetch of Lake Erie again, taking on classic proportions.

Round 2 looked very similar, as you knew it would.

When low-level winds converge into one direction, coming up the full length/fetch of Lake Erie while waters are still relatively warm with deep polar air, that allows the clouds to pick up more heat and moisture from the lake, billowing up ever higher with the increased fetch. That can be seen in this cross-section diagram from Penn State’s Department of Meteorology and Atmospheric Science.

Convergence increases over land from friction with the rough surface. The temperature lapse rate and the absence of shifting wind directions for many thousands of feet was indicated in advanced forecasting tools called analogs (to past events) and ensembles to be virtually unprecedented for a long duration event of tremendous intensity. These ingredients made the forecast of a paralyzing event a high-confidence one.

In fact, the convective lake-effect clouds reached so high into the atmosphere this NASA MODIS Nov. 18 satellite image actually shows the cloud shadows north of the band quite clearly.

As a major thaw and some rain were forecast for just a few days later, we knew rooftop snow would compress, and its persistent weight particularly on flat roofs would present the threat of collapses. There were, as mentioned earlier, many such structural failures, but not as many as some of us expected. We were also fearful of the flood threat from rain plus rapid snowmelt. However, some of the snow went straight from frozen state into the atmosphere in what is known as sublimation, reducing some of the runoff.

This monster storm lived up to expectations and, in a few spots south of Buffalo, exceeded early extreme expectation. Fortunately, its aftermath in the wet warmup phase were not as bad as they could have been.