Meaning I'm not sure it's commercially sustainable in Buffalo, but it's filled with weird beauty. Created by five young culinary professionals with their own followings, Waxlight Bar a Vin is a testbed for ideas about how to feed and water people for money. There is a restaurant term that fits its contours: atelier. Noun, “a workshop or studio, especially one used by an artist or designer.”

It is a laboratory for developing new taste sensations, refining old ones, and challenging longstanding restaurant notions. The standard bifurcated payroll can tilt towards servers, but Waxlight bypasses that by sending chefs Edward Forster and Joseph Fenush out with plates, so they can legally share in the tip pool. Another departure from business-as-usual: not offering customers a menu that stands still for months at a time, made of ingredients obtainable year-round. Oh, and there's no phone.

Looking at it that way gives an appropriate cushion to the highs and lows that are the results of genuine experimentation. 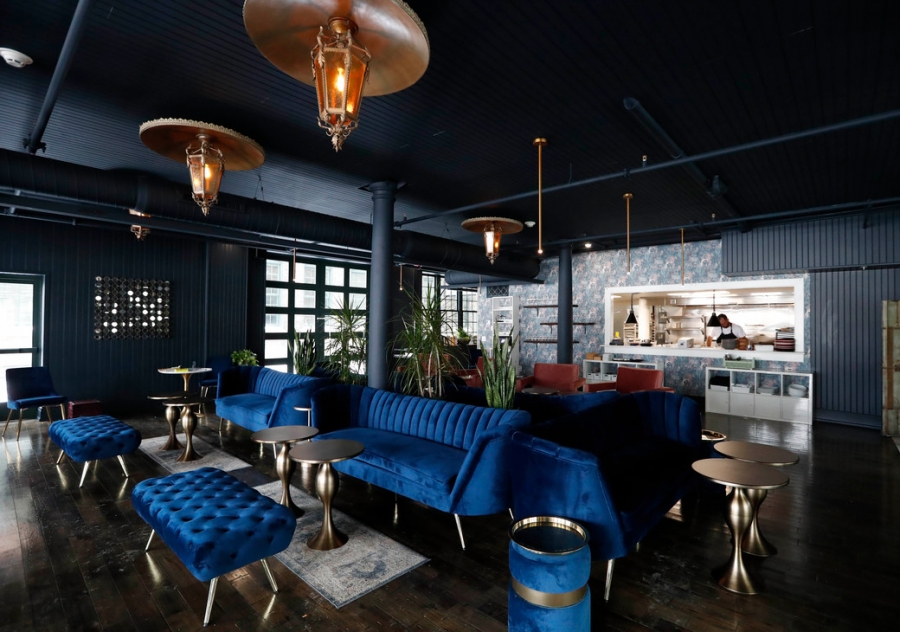 Drinks, conjured up or curated by Tony Rials, Jessica Railey and Jeff Yannuzzi, range from the esoteric six-ingredient cocktails to "beer and a shot, $6." Six cordials and elixirs ($7) are housemade, with essential flavors distilled into a few sips. They include mint/cucumber/ginger and pineapple/celery; the only alcoholic version is dried orange/lemon verbena.

Custom cocktails ($12) were riffs on an ingredient, on this night banana (charred, roasted or fermented), or a classic recipe (old fashioned). The fermented banana number had notes of citrus and coconut, an aromatic fresh nutmeg sprinkle of a frothy nature, like a tropical daiquiri with uncommon depth. Charred banana was accented with coffee, rice and island spice. 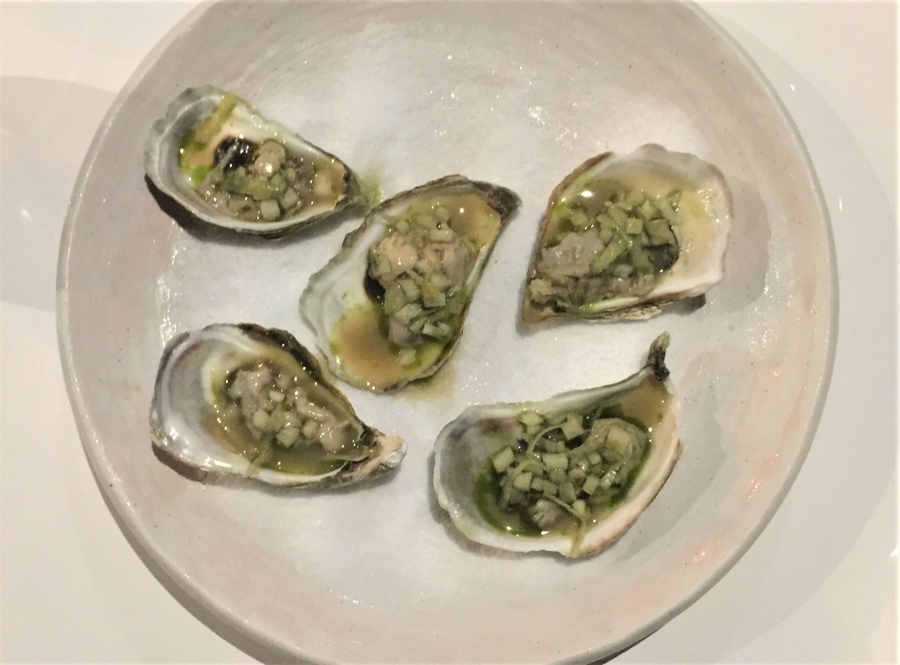 The thoughtful, delicious cocktails are backed up with a wine list that includes a champagne of the day, a diverse by the glass list ($8 to $13), and bottles from the Finger Lakes to New Zealand ($45 to $113).

Evangelizing the possibilities of food and drink is pretty much the Waxlight mission. After a recent visit, and provided with supplementary details, here were some of the creative highlights of Waxlight’s first menu: 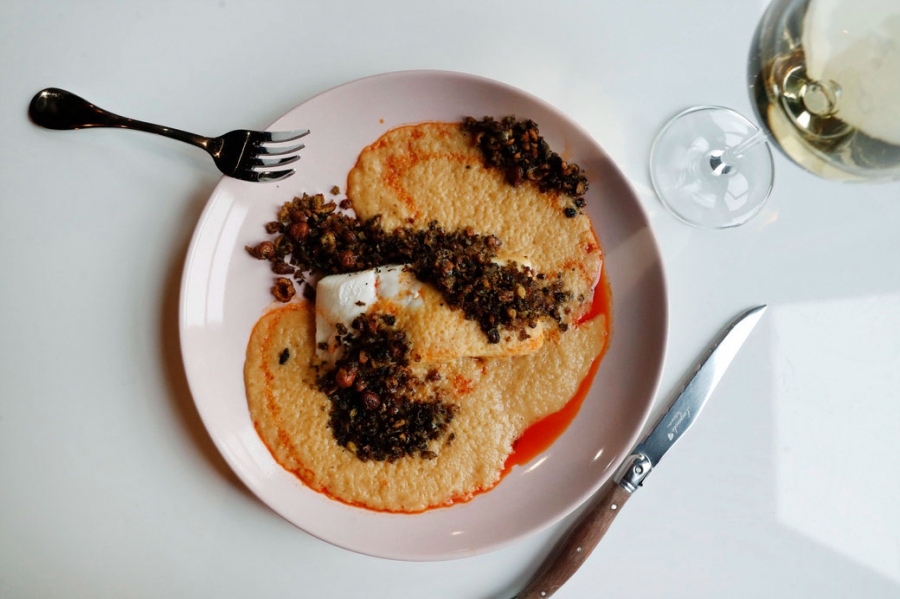 The daily charcuterie was pork rillettes ($12), or meat spread, with smoked apple chutney. It came framed with card-size sheets of housemade Cheez-It-type crackers that outdid the original, amplifying their sharp cheddar twang. 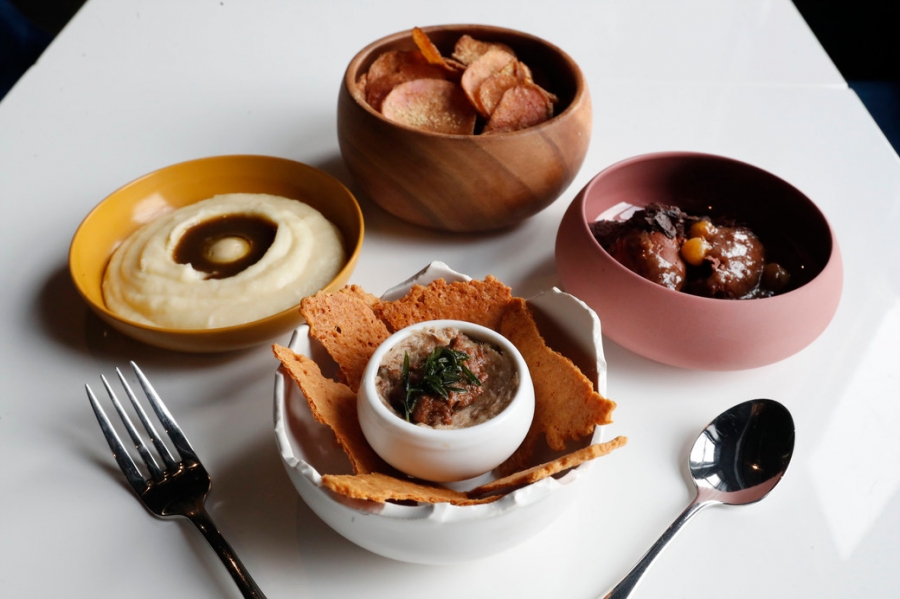 Oysters ($3.50) were pickled in vinegar flavored with grilled lettuce, and seasoned with fresh horseradish and bay leaf oil. That seems like a lot of work for a shellfish, but I could not argue with the vivacious result.

Potatoes and gravy sounds straightforward. At Waxlight it’s Robuchon-style potatoes – half butter, half potatoes, and a gravy made from potato skins and umami-laden black garlic. With foie butter ($14) it’s a swoonful smothery richness, just a mouthful of pure pleasure.

Charred and fermented cabbages on brioche with onion-butter sauce and mushrooms ($11) was given a shower of shaved, cured fermented beef heart. That was one of the dishes where all the effort didn’t seem to show in the flavor.

Hard to compete with kohlrabi and fennel ($9) glazed in citrus-chile seasoning, plated on yogurt flavored with orange and spice, then finished with pistachio and mint.

The creaminess of raw hamachi ($15), with pickled celeriac and toasted milk solids, lurched into Spicytown with an intense salsa verde that overpowered some of the fish's nuances. 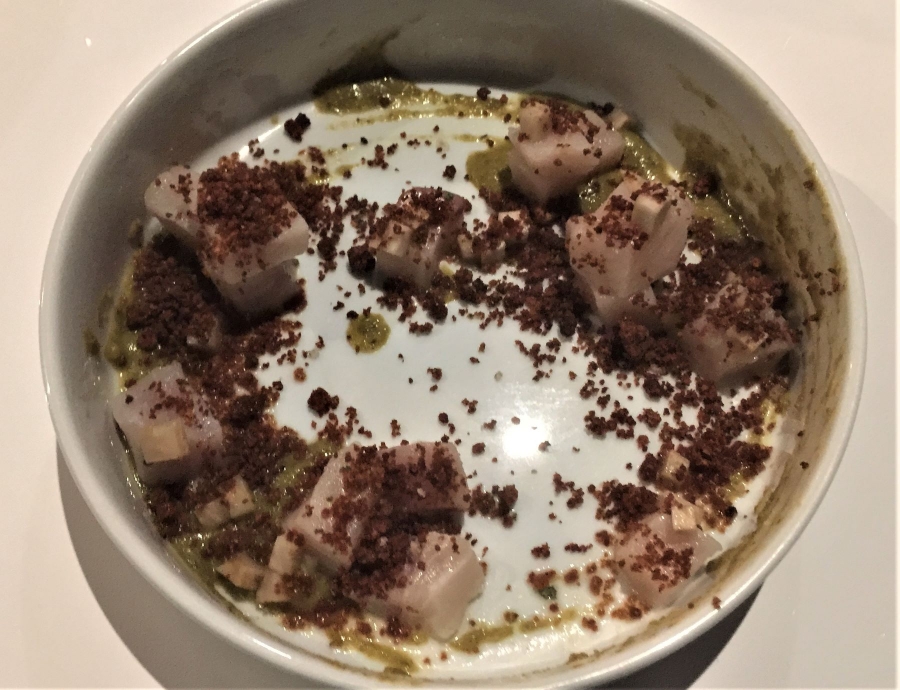 Chicken thighs with creamed kale and wild parsnip seed ($22) were a solid hit. Eating your leafy greens was never so easy. I can’t honestly tell you what wild parsnip seed tastes like specifically, but this was one tasty dish.

Many potential dinner parties include at least one person who primarily seeks beef and potatoes. Waxlight meets that reality with the Denver cut steak ($26), which is a new beef cut for me. It was outstanding. 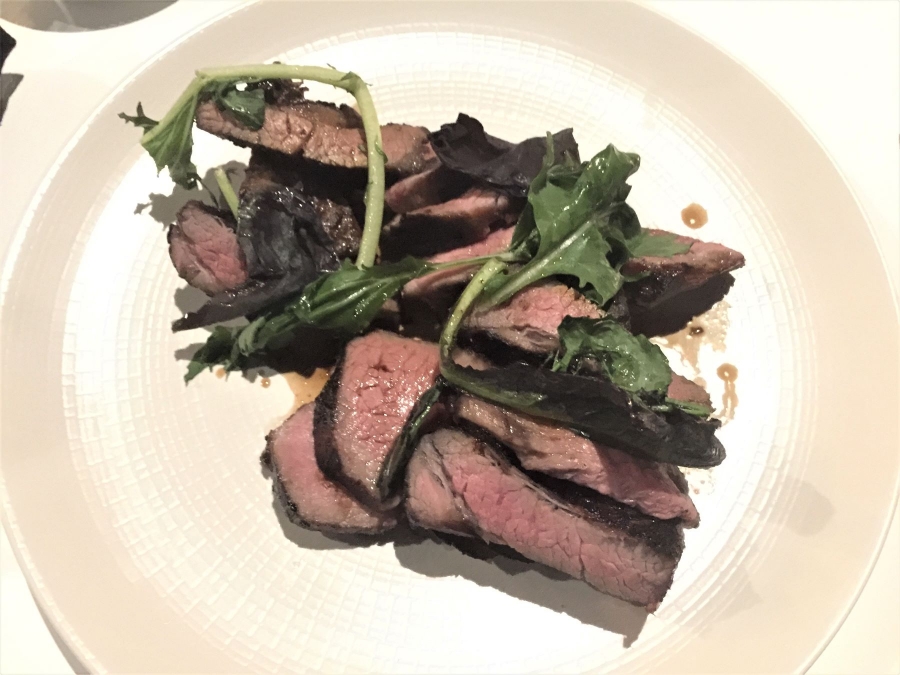 Most of that detail I got from the notes, not in the eating. That may not have been the dish’s weakness. By this point my taste buds had been through a pentathlon atop a decathlon, leaving them quite exhausted. 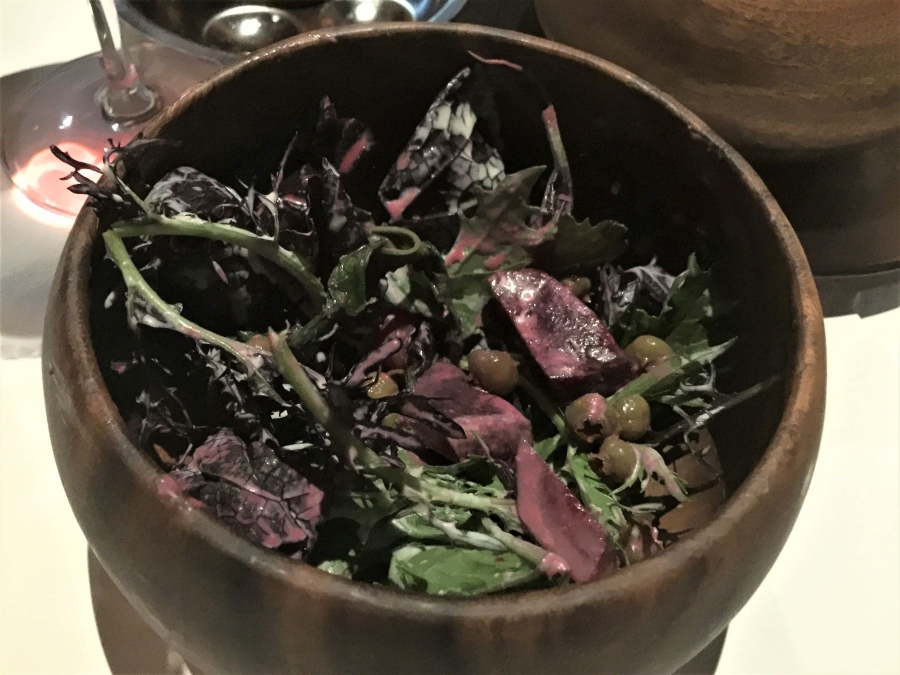 Yet how they sat up and smiled at the French-style omelette, with extra yolks and not a touch of brown, creamy and luxurious. Crème fraiche and the delightfully briny bubble-wrap pops of salmon caviar ($19) sent us to the stars. 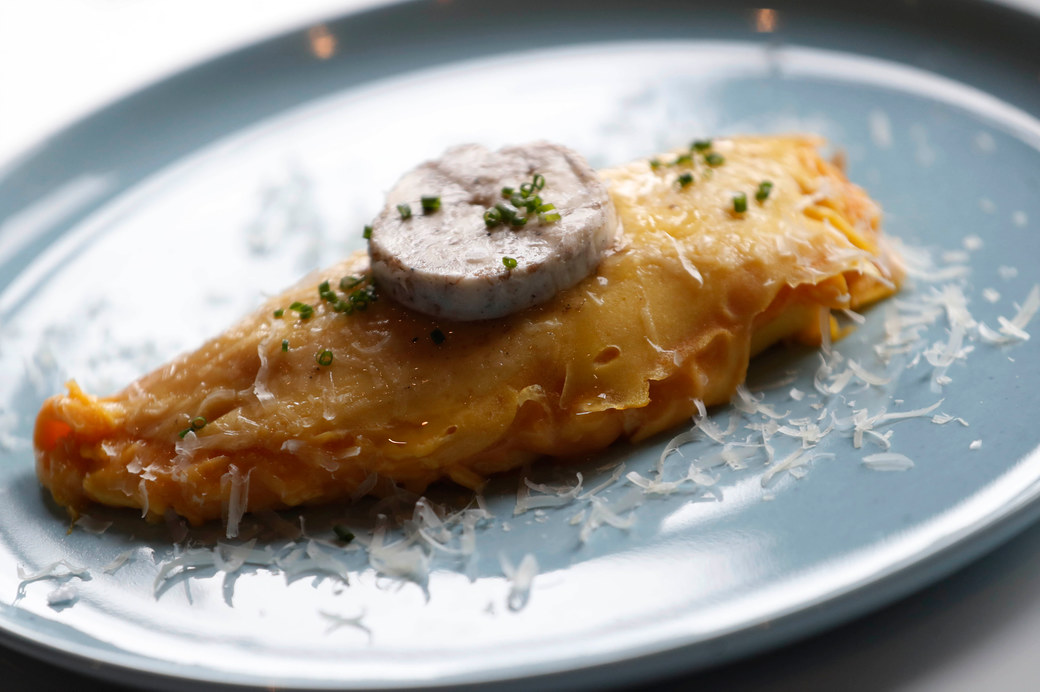 Then came dessert. By this point, finding artisanal Tennessee chocolate at the heart of a devastatingly deep chocolate pudding-like parfait ($10) wasn’t a shock. Discovering the tart pop of pickled gooseberries was a pleasant surprise.

I already had a solidly positive impression of the entire evening before Joseph Fenush showed up with the Concord grape fermented honey tart ($7). The pastry, in a flaky buttery crust, holding hugely fruity Concord jam, was pleasure enough, but it had a subbasement of delight, a weirdly delicious custard.

Then Fenush explained the fermented honey process, mead steeped with flowers and herbs and dandelions, and handed over the plate. The dessert’s phenomenally crunchy topcoat of sunflower seeds and oats sealed the deal. I have a new dessert obsession. 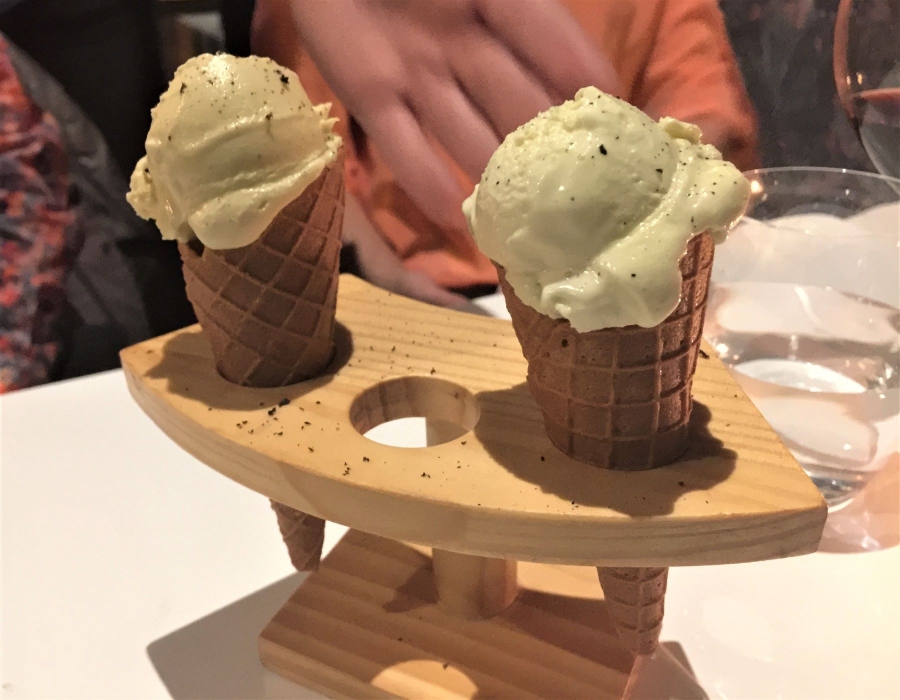 Vegans and vegetarians will be taken care of here. You just have to speak up. Gluten free? Tell the restaurant when you make a reservation, and the humans when you show up.

As it takes its first baby steps, Waxlight delighted me, but I’m excited by new and different to a perhaps imprudent degree. The amount of staff-created ingredients and local produce in use was impressive.

How the limited number of people working the floor will be able to handle a full room – with a service model that encourages chattiness and information exchange – remains to be seen. The room was half-full at my visit, and staffers’ hustle was evident. 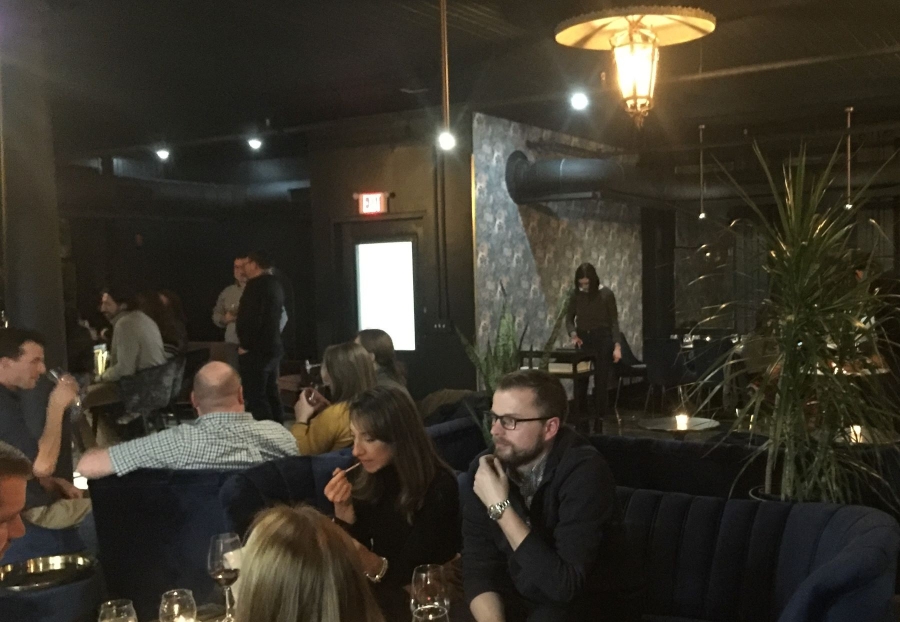 The success of a restaurant like Waxlight depends on its ability to recruit and satisfy a legion of regulars. There’s no question these people have the skills to make you happy if you seek adventure. Are there enough of such diners in Buffalo to keep them afloat? I sure hope so.

As the operation matures, I’m looking forward to seeing how five people with big ideas about food, drink and service can work together to make the extraordinary routine.