A month into the regular season, we are starting to understand the identity of this Buffalo Sabres team. And in the case of the penalty kill – well, that identity isn’t a particularly flattering one.

The Sabres have conceded 11 penalty-kill goals through the first 17 games of the regular season, which doesn’t seem bad on the surface. But Buffalo has been one of the most disciplined teams in the NHL. Their 48 shorthanded situations are fifth lowest in the entire league and a testament to Ralph Krueger and the skater group when it comes to maintaining discipline.

But when Buffalo does get into a shorthanded situation, things get ugly rather quickly. If we unitize all of these measures around the league and make a true apples-to-apples comparison for all penalty kills, this is how the Sabres stack up against their peers:

Across the board, Buffalo grades in the bottom third of the league. And that’s true if you care exclusively about the sheer volume of pucks that Carter Hutton and Linus Ullmark are seeing, and adjustments for the quality of those shots tends to make matters worse. More on that in a moment.

Because of the coaching staff change, it’s always important to get an understanding for what the team is doing from a personnel perspective when on the penalty kill.

The Sabres predominantly employ the PK1 unit to do the heavy lifting – Zemgus Girgensons and Johan Larsson from the team’s even strength checking line, paired with the Rasmus Ristolainen and Jake McCabe pairing.

The other three units tend to pick up whatever marginal minutes are left over and you can see that the groupings tend to stay the same – Girgensons/Larsson and Vladimir Sobotka/Jimmy Vesey as the forward mix, and Ristolainen/McCabe and Marco Scandella/Henri Jokiharju as the defensive mix.

Of these eight players, none is getting results that we would consider to be average or better. Some of that is probably indicative of Buffalo’s passive penalty-kill strategy that impacts all regular skaters, but some is probably a talent issue, too. 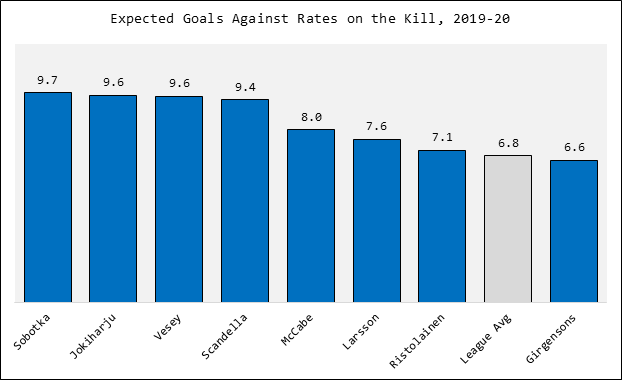 Absent Girgensons and Ristolainen – who are clustered around the league average and, directionally, have better numbers than the rest of the Sabres' penalty killers – this is a mess.

The good news is that most of the “bad” here is coming from skaters on the team’s second penalty-kill unit, like Sobotka, Jokiharju and Vesey. But they are still playing fairly significant minutes, and it’s not as if the first penalty-kill unit is turning in positive results, either.

I mentioned earlier that my theory about the passive penalty kill and the defensive box strategy Buffalo employs leading to higher volumes of shots against and quality scoring chances against is a primary point of concern. The expected goal data bears this out, but so do the shots against heat maps over at HockeyViz. Consider where these shots are coming from with the Buffalo kill on the ice, and you recognize that the Sabres' goaltending tandem – which combined has managed to stop 87.5% of shots down a man – is in for a tough time. 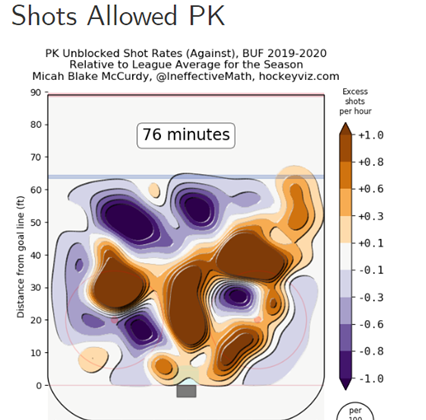 Long story short? That’s a lot of shot volume against coming from just outside of the crease and the low slot, where most dangerous attacking sequences materialize. And, consequently, not a lot of shots coming from the perimeter where goal scoring opportunities are hard to find.

Buffalo’s still in a decent standings position despite the shaky penalty kill, but this is probably something that demands more attention – if it hasn’t already – from the Sabres coaching staff. You can only survive so long with your goaltenders bailing you out on the kill.

The Sabres' skaters need to do a better job of both attacking puck carriers coming through the neutral zone before scoring opportunities manifest, and pushing attackers out to the perimeter in the chance the opposition gains the zone.

The Sabres haven’t had much success on either front, but there is still time to clean up what has been an obvious weak point.

Data via Evolving Hockey and HockeyViz.