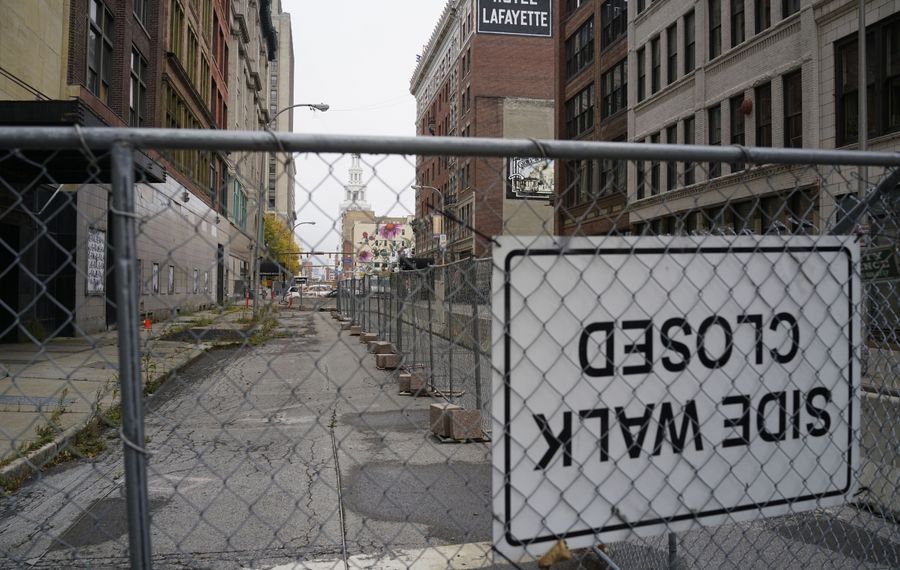 It’s hard to miss the 10-story building, which sits north of M&T Bank’s headquarters, between the Main Place Mall and Hotel @ the Lafayette. A Chinese company based in New York City, Landco H&L, bought the department store complex in 2014, with plans to make it into a Wyndham-brand hotel with two restaurants, a nightclub, spa and other amenities.

Various infrastructure problems have delayed the project, which has left a prime block of Washington Street closed to southbound traffic for nearly two years. Buffalo Common Council President Darius Pridgen is among those whose patience is wearing thin, for good reason. The project needs to move forward, quickly.

Landco says progress is being made. The company has hired Savarino Cos. as the construction manager, to oversee the project and direct the general contractor, Loung Construction.

Pridgen has said that the city may take legal action if the developer is unable to get the job done.

“This is just taking too long,” Pridgen said. “It’s disrupted traffic, and it’s created an eyesore and left a major building in downtown Buffalo vacant for many years.”

Since buying the property, Landco was slowed by cultural and language barriers, as well as physical ones. The $70 million project, classified as historic reuse, is centered in a building that required asbestos abatement and mitigation of mold problems that were the result of a major basement flood.

The building’s mechanical vault, an extension of the basement underground, has sustained water damage, rendering the sidewalk and part of the street unsafe. That’s why part of Washington Street is fenced off, with southbound traffic diverted to Clinton Street.

The developer and the city are reportedly in a dispute over who must pay for repairing the roadway and the underground vault.

This is a prime downtown block that includes the front entrance of Hotel @ the Lafayette. Washington also feeds south past Sahlen Field, KeyBank Center, LECOM Harborcenter and Canalside. Having the street closed, even for one block, is more than a small inconvenience.

Lining up financing for the project has also been a challenge for Landco, which apparently has little experience with ventures of this size. The company needed to line up a historic tax credit investor and a lender to supplement funding from its Chinese backers. A source told The News the tax credit investor is on board and Landco is talking with a construction lender.

Landco has refused requests for comment from The News but the company doesn’t have the option of refusing to take calls from city officials. If a solution is not found, legal action is a logical step. Further delays on the project work to no one’s benefit.