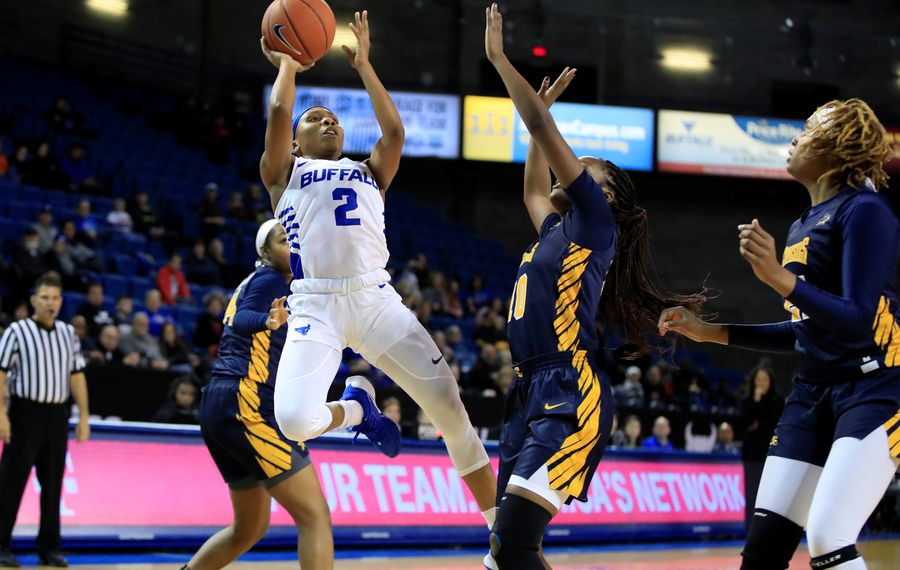 Minutes after a win against a crosstown rival, University at Buffalo women’s basketball coach Felisha Legette-Jack didn’t stop challenging the two players who have paced the Bulls so far this season.

Theresa Onwuka scored a career-high 30 points, and Dyaisha Fair added 24 in a 71-55 win against Canisius College on Tuesday at Alumni Arena. It’s the third time in as many games that the senior and the freshman have scored in double figures for the Bulls.

Legette-Jack said they have yet to hit their ceiling this early in the season.

“Their skill set is way higher than what you’ve already seen,” Legette-Jack said. “There’s more in their tank.”

Onwuka, a guard from Nigeria, is averaging 25 points a game for the Bulls. She’s utilizing her experience and the fact her teammates are opening the floor for her to take quality shots. Fair, a freshman from Rochester, entered the game as the ninth-leading scorer in the country (27.5 points per game) and is averaging 26.3 points in her first three college games.

Even with such productivity, Fair is flattered by the fact that Legette-Jack wants to motivate her.

“It means her trust is in me, completely,” Fair said. “As a freshman, that really means a lot, so I’ve got to keep coming, no matter what.

Onwuka readily accepted the challenge that Legette-Jack has placed in front of them.

“She doesn’t say something that she doesn’t know is true,” Onwuka said.

To say that Onwuka and Fair have picked up the slack in the absence of Summer Hemphill is an understatement. Hemphill, a forward and a preseason All-MAC East Division selection from Cardinal O’Hara, missed her third game with a leg injury.

“I can only tell you that there will be a third double-double out there when Summer comes back, and she’s getting closer to coming back,” Legette-Jack said. “We really miss her, but we have to do more.”

The Bulls needed to overcome a slow start against the Golden Griffins, who haven’t beaten the Bulls at Alumni Arena since Dec. 5, 2009.

“We were playing passive basketball,” Legette-Jack said. “I don’t know where that came from. I really dialed them up in the locker room and talked about having a purpose for your play.”

Onwuka, Hanna Hall and Marissa Hamilton hit three 3-pointers as part of an 11-point swing by the Bulls, in which they took an 11-4 lead five minutes into the game and opened their lead to 21-10 after the first quarter.

Patterson-Ricks said the Griffs went with a triangle-and-two defense as a means to keep the ball out of the hands of Fair and Hall. That helped, as Fair was 0 for 1 from the floor in the second quarter. But it wasn’t a cure-all for the Griffs, who still had to contend with Onwuka, who had 15 points at halftime.

Fair opened up after halftime, scoring 12 points in the third quarter as the Bulls took a 61-43 lead into the fourth quarter.

“They pushed in transition and they got second shots, and we didn’t box out consistently,” said Patterson-Ricks, who led Canisius with 17 points. “That’s how they were able to get more possessions, and that hurt us.”

Canisius coach Scott Hemer said the Griffs had no adequate way to prepare for UB’s multiple options at the perimeter.

“It’s challenging for us to simulate that in practice, that type of quickness and explosiveness,” Hemer said. “Both of them are very explosive players, and Fair’s ability to score at all three levels, it’s tough for us to simulate that in practice. But that’s why you play some of these (nonconference) games like this, so your players can have a chance to see that, to face that.