PITTSBURGH — Alex Nylander sat at his stall in the PPG Paints Arena visitors' dressing room following a morning skate in which he lined up alongside three-time Stanley Cup winner and Chicago Blackhawks captain Jonathan Toews.

Nylander untied his skates and smirked while listening to Patrick Kane, whose long list of accolades includes three Cup victories and a Hart Trophy, joke about defenseman Olli Maatta, who won back-to-back Stanley Cups with the Penguins, addressing a group of Pittsburgh reporters.

Nylander then pulled a Blackhawks cap onto his head and beamed when describing the opportunity he never received with the Buffalo Sabres.

"I think it was time for me," Nylander, a 21-year-old winger, said Saturday morning when asked if he needed a change of scenery. "It was really good to be traded here. I’m really happy about it. They obviously gave me a chance at the start. I had a really good training camp last year, and it was obviously not fun that I got sent down. It’s nice to get a chance here, not just get sent down and come up later. I know I can play in this league, and I’m ready for it."

However, like many young players, Nylander is still learning to be consistent offensively and defensively during his first legitimate opportunity in the National Hockey League. His speed and skill are up to par, but defensive struggles persist. Similar issues limited Nylander to only 19 games over three seasons with the Sabres before being traded for defenseman Henri Jokiharju in July.

Nylander, who was selected eighth overall in in the 2016 draft, didn't make much of an impact without the puck during his three seasons with the Rochester Americans. Despite possessing tantalizing talent, he tended to disappear because he wasn't a consistent threat to force turnovers on the forecheck. Nylander would show improvement one game, only to struggle the next.

Nylander has been better in Chicago, though. Before a 3-2 shootout loss in Pittsburgh on Saturday, Blackhawks coach Jeremy Colliton said Nylander's progress over the first month of the season was "very, very good for a young player."

"I think he’s been really good," Colliton said. "Certainly since the first couple games of the year, from then until now, he’s improved and it’s exciting for our team to see his development in a really short time. He’s come through with some big plays offensively, but I’m comfortable with him on the ice defensively." 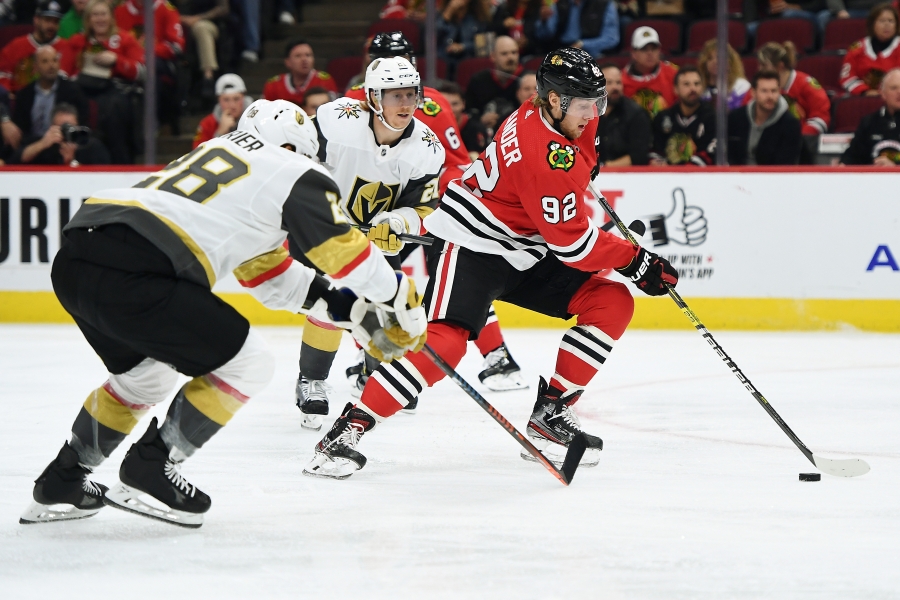 Less than 12 hours later, Colliton benched Nylander with the score tied in the third period. He did not play the final 9:03 of regulation or the five-minute overtime after being partly responsible for Chicago's blowing a two-goal lead. He was replaced by veteran Andrew Shaw on the Blackhawks' top line.

Nylander made a weak attempt to backcheck on an odd-man rush that led to the Penguins' first goal and was on the ice when Pittsburgh winger Bryan Rust was left alone on the doorstep to score the tying goal. Nylander was returned to the top line Sunday for Chicago's 5-4 win against Toronto, though he did not register a shot on goal and was credited with one giveaway in 12:50.

Similar lapses led to Nylander's being a healthy scratch Oct. 12, despite having started the season on a line with Toews and Kane. Following two difficult performances, Colliton used a thorough one-on-one video session to show Nylander situations in which he needed to be better defensively. Colliton, who is in his first full season as the Blackhawks' coach, also wanted to show Nylander a few positive moments from games.

Nylander responded with his finest stretch of play in the NHL.

"I’m just trying to learn from the veterans here, get feedback from the coaches and get better off the puck," Nylander said. "I want to improve my game every day, offensively and defensively. It’s been great dialogue, good feedback coming from [Colliton]. He showed me parts of my game I can do differently and parts that I’ve done well. That’s been really helpful this year. ... I want to be a top player on this team and use my skills to help us win each game."

Nylander has two goals among seven points with a minus-2 rating while averaging 12:39 of ice time through 16 games. In addition to a prominent role at even strength, he has skated with the Blackhawks' second power-play unit. Nylander scored in their season-opening loss against Philadelphia, a goal that displayed his remarkable shot.

Nylander's finest moment of the season thus far came in his first game following the healthy scratch. He forced a turnover near the opposing blue line by poke-checking the puck off Edmonton Oilers center Connor McDavid's stick, darted into the offensive zone to retrieve the loose puck and scored on a shot from below the right faceoff dot on Oct. 14.

Nylander has 10 takeaways, one less than Kane for the team lead and nine more than he had in 12 games with Buffalo late last season. He began to make progress defensively under coach Chris Taylor in Rochester last season, resulting in a career-high 12 goals among 31 points in 49 games.

"When you get drafted by a GM and there’s a new GM in town, it’s what happens," said former Sabres goalie Robin Lehner, now a teammate of Nylander's in Chicago. "That’s what happened in Buffalo. Every single player that was brought in by Tim was pushed out, which I understand. Need a clean slate for the new GM. He’s ultimately responsible for what the product on the ice, so you kind of have to do that.

"Botterill wanted to bring in his guys and he shipped out everyone else. That’s what happens, and I think Alex’s style of hockey fits the NHL way better than the AHL. Obviously he’s growing and maturing as well, but he’s been great for us so far. I think he’s been very unlucky up here as well because I think he should have four or five more goals than he has. That will come. He’s a very, very good player." 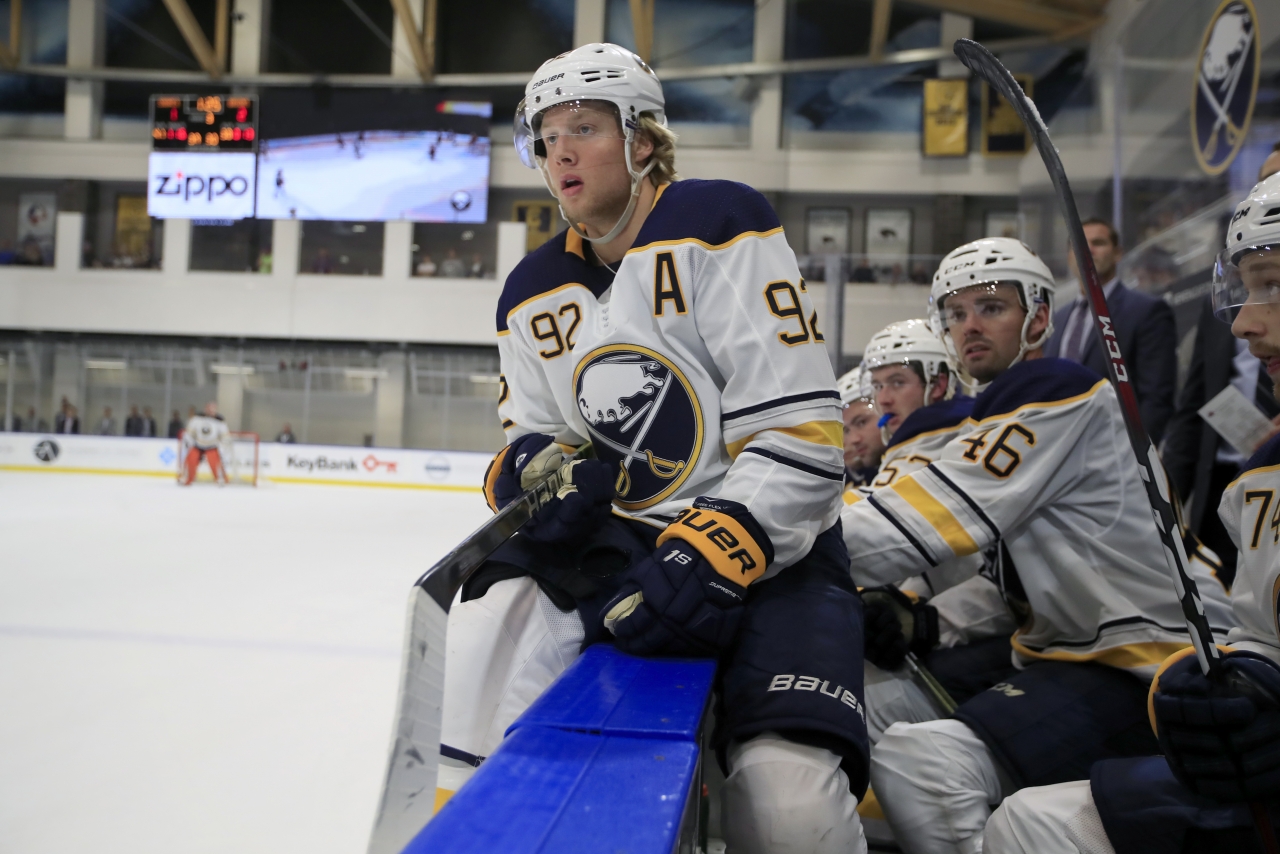 Alex Nylander was drafted by the Sabres with the eighth overall pick in 2016. (Harry Scull Jr./News file photo)

Lehner, who is also in his first season with the Blackhawks, knew how difficult life can be as a young player in the NHL. Living in a hotel can be lonely, and there are few distractions from the mental grind of an 82-game season. So, Lehner and his wife invited Nylander to live with them and their two children.

Lehner, 28, has given Nylander advice following games and tries to help with the inevitable overthinking that can consume a young player during his first year in the NHL. The latter has been an issue for Nylander before.

He scored 10 goals as a rookie in Rochester in 2016-17 and seemed like a logical choice to make the Sabres' roster in training camp the following season. However, a groin injury suffered during the Prospects Challenge kept Nylander out of Rochester's lineup until November, and he did not feel 100 percent the rest of the season.

The Sabres sent Dennis Miller, head of rehab and development, to Sweden to work with Nylander in summer 2018. The result was what Nylander described as the best offseason training of his career, and he had a strong training camp last fall. However, the Sabres opted to send Nylander to Rochester and kept Tage Thompson, whom Botterill acquired from St. Louis in the Ryan O'Reilly trade.

"It was kind of different for me," Nylander said. "I had never been injured in my life really before until I had my groin injury in my second year. It wasn’t what I expected it to be when I came back. It was obviously harder than I thought, so that wasn’t a fun year. Then I had these other unfortunate injuries I couldn’t do anything about. I was out a couple weeks here and there. I’m trying to stay healthy this year and I learned a lot from those injuries – what you need to do [to prepare] and always stay positive."

Nylander's trade again raised the question whether the Sabres mishandled his development when they had him turn pro following his draft year, rather than returning him to the Ontario Hockey League's Mississauga Steelheads.

Nylander has never spoken negatively or expressed regret about that decision. He said he wouldn't change anything he could control about his time in Buffalo. However, there were times during his three seasons he felt he was ready to help the Sabres. A full-time NHL role never came, though.

His focus now is taking advantage of the opportunity he has.

"There wasn’t much I could control," Nylander said of his time in Buffalo. "Obviously, I felt ready sometimes and that I could have played up there, but they decided to keep me down there. I just learned from all that stuff and it’s been really good coming into this organization. It’s been unbelievable."

Defenseman Lawrence Pilut, who practiced with the Sabres during their trip to Stockholm, was assigned to Rochester on Monday. Pilut has one goal among six points in eight games with the Amerks. He missed training camp and the start of the season while working his way back from shoulder surgery.