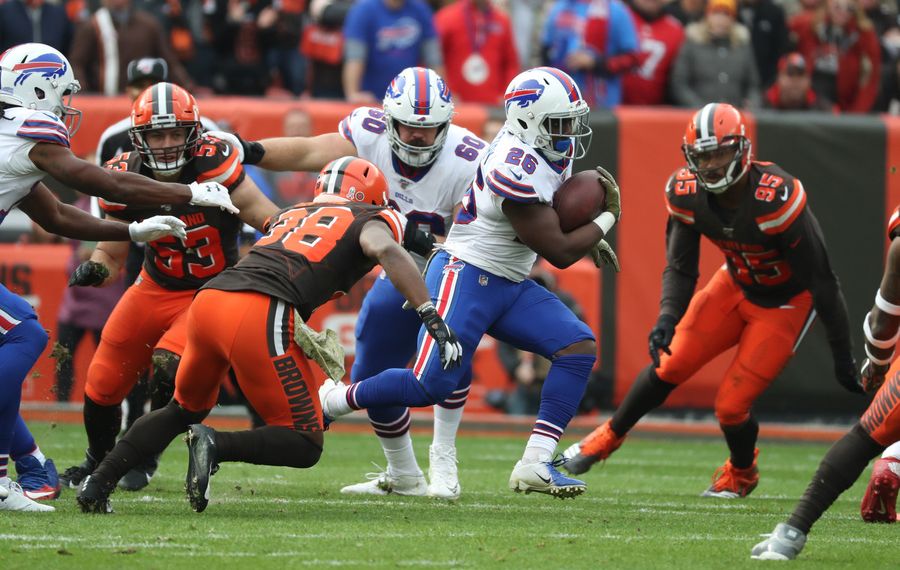 This is no longer a suggestion from Buffalo Bills fans desperate for even the tiniest sliver of hope for an offense that makes scoring seem like climbing Mount Everest. This is a plea.

It made perfect sense a couple of weeks ago when the Philadelphia Eagles came to town, didn't it? The winds were whipping throughout New Era Field. Under such conditions, you absolutely lean on your running game, just the way the Eagles did.

It made perfect sense Sunday, on the road against the Cleveland Browns, didn't it? The Bills were facing the NFL's 30th-ranked run defense. Running the ball right down the Browns' collective throat was the epitome of a no-brainer.

Apparently not. Cleveland 19, Buffalo 16 (with two points courtesy of the defense).

Specifically, give it to Devin Singletary and allow him to show much more of the considerable explosiveness he has only been allowed to display in flashes. Keep giving it to him – with smaller doses of Frank Gore, whose 36-year-old legs are better for role-playing rather than a featured role, sprinkled in – until the opponent renders Singletary a nonfactor.

How something so obvious to the rest of us seems to somehow be off the radar of the coaches is beyond baffling.

Rather than do what appeared logical, the Bills mainly tried to beat the Browns with Josh Allen's throwing arm. His 41 pass attempts equaled a career high. The Bills are 4-7 in games where Allen throws 30 or more times. They're 7-2 when he doesn't throw that often.

Please save the lame argument that the Browns were "stacking the box" and, therefore, it would have been fruitless for the Bills to keep slamming into that figurative wall. Here's some breaking news: EVERY team bunches extra players near the line of scrimmage at various times. The Bills even tried that against the Eagles, who still proceeded to trample them for 218 yards.

You make your best effort to defeat the strategy through scheming and sheer brute force, as the Eagles did in repeatedly winning physical battles with the Bills' defensive front.

For all of the box-stacking the Browns did, Singletary still managed to average 5.3 yards per rush on his paltry eight carries, which were 12 fewer than he had the previous week against the Washington Redskins. Allen threw only 20 times in that game.

Offensive coordinator Brian Daboll noted to reporters Monday that, besides the eight rushing attempts against Cleveland, Singletary also had seven targets (resulting in three receptions for eight yards). The clear message: A concerted effort was made to get the ball into the running back's hands, with the passing game accounting for nearly half of it.

"Running the ball was tough sledding in there," Daboll said. "We gained a few yards in the first half (21 by Singletary on three carries). They did a good job in the second half. It just felt that if they pack it in, there are weaknesses in other areas, in terms of spreading it out and trying to get it on the perimeter, trying to open up more running lanes."

One flaw with that thinking is almost nothing about Allen's performance as a passer should have encouraged Daboll or coach Sean McDermott to believe he'd be able to throw the Bills to victory. Allen's long attempts consistently sail over the head of open receivers. He isn't making decisions quickly enough. He isn't protecting the ball when he runs well enough.

Another flaw with how the play-calling unfolded speaks to the Bills' offseason mission of revamping their offensive line. With four new starters and a new O-line coach, this group is supposed to be significantly better. Why not trust the offensive linemen to do what they like to do best and let them channel their inner snowplow?

Yet another flaw with going away from the ground game is that it goes against McDermott's fundamental coaching philosophy. The defensive-driven thinking that influenced his squandering precious seconds by being extra cautious in the final minute against the Browns so as to not squander the chance to try for a tying field goal should make him all about the running game.

And if you're going to look to put the ball in Singletary's hands only 15 times, seven should not be passes, especially for a rookie who had only one reception in his college career.

The Bills' offense is an dire need something, anything, to bring it to life. Staying the course with a mostly pass-first approach isn't cutting it.