When news of a news conference to announce a summer 2020 concert at New Era Field was announced, speculation ran high.

“It’s gonna be Springsteen & the E Street Band,” many said on social media, apparently not knowing that Springsteen’s planned show at the stadium in 2003 was moved to the Darien Lake Performing Arts Center due to sluggish ticket sales.

“Dead & Company,” insisted a few hippies, perhaps indulging in wishful thinking. (This isn’t Los Angeles, where that band can sell most of the 55,000 seats at Dodger Stadium, as it did in 2018.)

“Foo Fighters,” screamed the people who scream “Foo Fighters” every time the subject of a prospective big-ticket show at New Era Field comes up.

I was hoping for Tool, though I knew better. There’s not much chance that such a non-mainstream band could sell 50,000 tickets at our football stadium.

So we’re getting Billy Joel on Aug. 15, his first gig in the Buffalo area since the 2010 "Face 2 Face" tour with Elton John at KeyBank Center (what was then-called HSBC Arena). His last solo show was a 2007 stop in the same place. It's a concert I remember fondly, because I took my then-7-year-old son to the show, and he respects Joel’s artistry to this day. 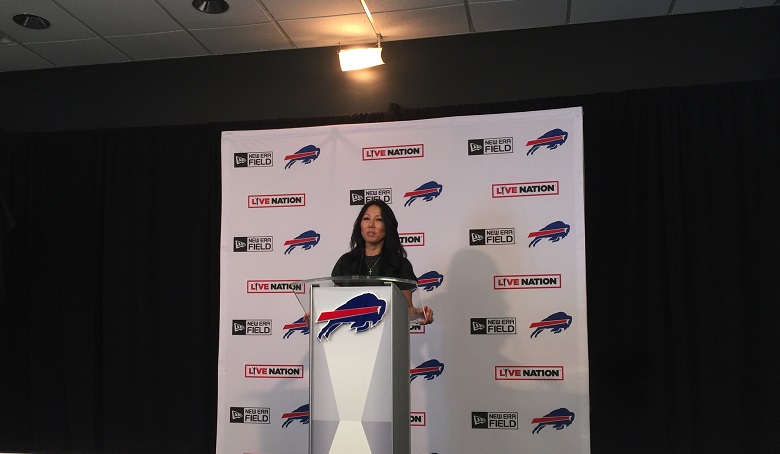 I had barely shared the news from Pegula Sports & Entertainment President and CEO Kim Pegula and Live Nation Regional President for Upstate New York Jimmy Koplik’s joint announcement via Twitter when the naysayers started saying nay, many throwing in an “OK, boomer” ageist catchphrase that has been all the rage of late.

“This needed a press conference? He plays at MSG every month … not impressed …,” read another, referencing Joel’s now six-year-long monthly residency of sold-out shows in New York’s Madison Square Garden.

But for every “meh, whatever” on social media, four or five were counting the days until the Nov. 22 general public on-sale. (American Express customers can participate in a presale starting Nov. 18.)

“This announcement comes almost 46 years (later) to the day I first saw Billy Joel … opening for the Doobie Brothers at Kleinhans Music Hall,” gushed one fan.

“I’m definitely going … haven’t seen him since 1984,” declared another.

The haters might not like to admit it, but Joel is one of the few artists capable of filling New Era Field. This is why we aren’t seeing a full seasonal roster of shows at the stadium. Aside from an occasional industry anomaly – one of Phish’s homegrown festivals, for example, which routinely draw between 30,000 and 50,000 fans – not many artists outside of mainstream pop are able to draw those numbers.

Based on six years of monthly sellouts at MSG and a flood of recent sellouts in stadiums with comparable attendance capacities – Boston’s Fenway Park, for example, which he’s filled to capacity for six consecutive summer dates – Joel fits the New Era Field bill neatly.

“It’s really a New York State play, not just a Buffalo play,” Live Nation’s Koplik said after the Tuesday news conference. “We've been trying to get him to come here for a long time now. Billy is only playing a total of six stadiums in this time period. We've consistently been told that this kind of thing can’t be pulled off in a secondary market like the one New Era Field sits in, but we’ve proved them wrong with the shows we’ve done over the past several years.”

That’s good news for folks who would like to see our football stadium used for concerts on a more consistent basis. But if you’re hoping for a return to the glory years of daylong, multi-act shows at the home of the Bills – don’t hold your breath. It’ll only make you blue.

Oh, and to all the haters out there: Forget about the patina of “boomer-ness” that may be tinting and tainting your view of Joel’s art. Get your hands on “The Nylon Curtain” album and give it a fair hearing.