Another new charter school is scheduled to open in Buffalo next year.

At least three more could be on the way.

That’s on top of the two charters that opened in the city last year – and the two others that started up the year prior.

Despite ongoing efforts to turn around the Buffalo Public Schools – adding new high schools, lowering class sizes, increasing the number of schools in good standing with the state – it hasn’t been enough to slow the charter movement.

In fact, the movement seems to be picking up steam, as the search continues for more high-performing schools throughout the city.

“The charter school sector is real,” said Joseph Polat, director of Buffalo Academy of Science Charter School. “I know there are a lot of people trying to ignore this fact, but the charter schools are here to stay as long as the education is not fixed in Buffalo.”

Low proficiency rates in reading and math at district schools across the city continue to be an impetus for new charters, like Buffalo Creek Academy.

Buffalo Creek is the city’s latest charter  – public schools that are run independently as an alternative for parents dissatisfied with the “traditional” public school. It was approved in October by the State University of New York, one of the state’s two authorizers of charter schools.

That makes 19 charter schools in Erie County – most of them in Buffalo.

The district pays charters for every city student they enroll and redirected more than $125 million to charters last year alone, fueling a long-brewing debate over education and tensions between the two sides.

“But until we show a greater level of achievement," Cash said, "there will still be a perception that there is room for additional options for families in our city."

The number of charters had been relatively stable in the region for about a decade until four new ones opened within the past two years.

Besides Black Creek, three more could open on the city’s East Side in 2020.

Buffalo Academy of Science is seeking approval from the Board of Regents, the state's other charter authorizer, for a second school. Buff Sci, as it's known, would replicate its school of nearly 800 elementary, middle and high school students, but give preference to kids learning English as a new language, Polat said. 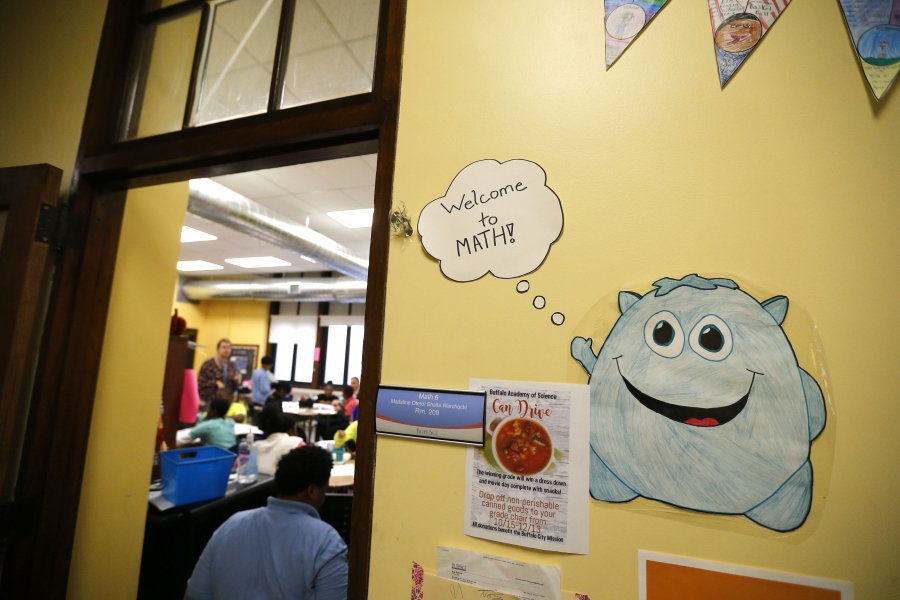 Buffalo Academy of Science Charter School is one of the city’s highest performing schools in both math and English. Its director says “charter schools are here to stay.” (Mark Mulville/Buffalo News)

Nickel City Preparatory also submitted an application with the state to open as an elementary charter school.

Primary Hall Preparatory, another proposed elementary charter, has plans before the educational governing board, as well.

A decision on the three could come by the end of the year.

“This doesn’t mean new charters are going to bring the solution,” Polat said.

“Some of the charters are also struggling, because it’s not a really easy environment to work in and get better,” he said. “This is a really tough job.”

The uptick in charter activity is being stoked by Building Excellent Schools, a national organization based in Boston that trains educators on how to create successful charters.

Over the past few years, it has partnered with the Cullen Foundation, a local foundation that funded yearlong fellowships to the Boston organization for the founders of Buffalo Creek, Nickel City and Primary Hall, as well Buffalo Collegiate and Persistence Prep, two charters that opened last year.

In return, they would come back to Buffalo with the goal of opening high-performing charters.

Manning, an Air Force veteran with experience as a teacher and administrator in schools overseas, said the curriculum at Buffalo Creek will focus on literacy and math, with an emphasis on computer science for students at all grade levels.

Starting with 112 students in fifth and sixth grades, the middle-high school is scheduled to open in August at a yet-to-be-determined location.

“I know there is still demand,” said Liz Evans, director of operations for Elmwood Village Charter Schools, whose Days Park location is one of several up for renewal this year. “We had about 100 more applicants this year than last year for both our schools.”

The city school district, meanwhile, has been wanting the state to pump the brakes, raising concerns about too many charters in Buffalo and not enough kids or qualified teachers to go around. Officials also note that hundreds of charter school students return to the district each year.

Cash agreed with the need for more high-performing schools across the city.

But he doesn’t believe the charters have the magic formula, either.

“When I look carefully at these charter school plans, I haven’t seen anything outstanding that either blows our work away or has a real solid plan to reach that higher level that we’re all seeking,” Cash said.

A look at proficiency rates in math and English language arts for students in grades 3 to 8 who took the state standardized tests last year show that – like district schools – some charters are performing better than others.

About a third of the charter schools were among the top-performing schools in the city, scoring above the countywide proficiency rate of 39% for ELA and 40% for math.

A third either fell just below the countywide average or in the middle of the pack among city schools.

And a third were below Buffalo’s districtwide proficiency rate of 25% for ELA and 21% for math.

A number of district schools, however, were at the bottom in both categories – scoring as low as 7% proficiency for ELA and 5% for math.

School Board President Sharon Belton-Cottman argued that the district schools educate a larger percentage of kids with disabilities and students learning English as a new language.

“It’s not apples to apples,” said Belton-Cottman, a frequent critic of charter schools. “I appreciate that the parents have freedom of choice, but to paint a picture the charters are doing a better job is just not accurate."

The cap on the number of charters in New York has been reached in New York City, but under state law there’s still some room for charters to grow upstate.

That may make Buffalo a little more attractive to some of the national charter networks looking for space to grow.