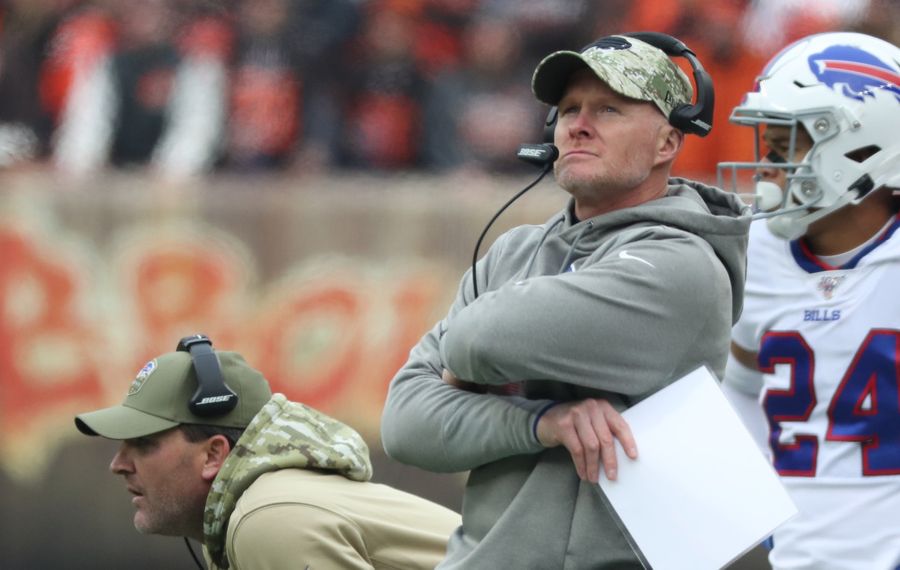 The Buffalo Bills’ clock management at the end of Sunday’s game against the Cleveland Browns at FirstEnergy Stadium was confusing, to say the least.

Coach Sean McDermott did his best to offer some sort of an explanation Monday.

“The plans weren’t really to huddle at that point. It was to go to the line and get the third-down call off and then save the timeout there,” McDermott said. “Those are situations we practice every week. … We didn’t execute well enough, so we’ll go back and look at that again this week.”

A refresher on the situation, in case you blocked it out. Facing a second and 10 at the Browns’ 41-yard line with 59 seconds remaining and one time out left, Bills quarterback Josh Allen completed a 6-yard pass to Devin Singletary. The running back made a rookie mistake, though, and wasn’t able to get out of bounds. That left the clock running … and running … and running. The Bills didn’t snap the ball until 26 seconds remained, a full 25 seconds after Singletary was tackled.

“You want to try and get the best play that we could have prepared for that situation,” offensive coordinator Brian Daboll.

That ended up being a bunch play, with wide receiver John Brown lined up in one-on-one coverage against Browns cornerback Denzel Ward on the right side of the formation. On the left side, the Bills had receivers Cole Beasley and Isaiah McKenzie and tight end Tyler Kroft.

The Browns responded by sending a “max” blitz – rushing seven defenders at Allen and leaving the other four in single coverage. Allen signaled to Brown, but his pass was nowhere close to the receiver.

“We wanted to get it to our best, gotta-have-it type of play that we have,” Daboll said. “We ran it earlier in the game. We threw it to Dawson (Knox) on a little under route, where he picked it up on third-and-2. And you know, on this play, they played blitz zero and failed to connect.”

It’s easy to cherry pick moments from screenshots, but the frozen image of Beasley wide open at the 30-yard line on the other side of the field is jarring. If Allen goes there, Beasley easily gets into chip-shot field goal range, if not makes it to the end zone.

“He has to make a split-second decision when you have all those people up at the line of scrimmage in there,” Daboll said of his second-year quarterback. “And the blitz, he has to make a quick read on that. We had a three-man route combination over to the left, and he had a one-on-one with John to the right, and threw it up there, and we just didn’t connect on it.”

After the pass fell incomplete, McDermott had another decision to make: Go for it on fourth and 4, or attempt a 53-yard field goal that would have tied the game, 19-19.

Of course, it didn’t turn out that way. Hauschka’s kick came up short and left.

“Got a lot of confidence in Stephen and obviously it didn’t work out, but we’ll remain confident in Stephen as we move forward here,” McDermott said.

“Just overall different situations in the game,” he said of what made the final fourth-and-4 different. “Different amount of time on the clock. … all comes down to situational football right there.”

A critic might say that the coach was playing for the tie in that situation, but McDermott disputed that Monday.

“We’re going to win it,” he said. “That’s the mindset. At a minimum, trying to put us into overtime in that situation. We had a chance, I thought.

“All of those things we’ll learn from. All of those things are good for some of our young players to experience right there. Wanted to come away, obviously, with the win. We had a chance, we were in position -- in what I thought was a favorable position with that amount of meat on the bone with the clock there and a timeout.”