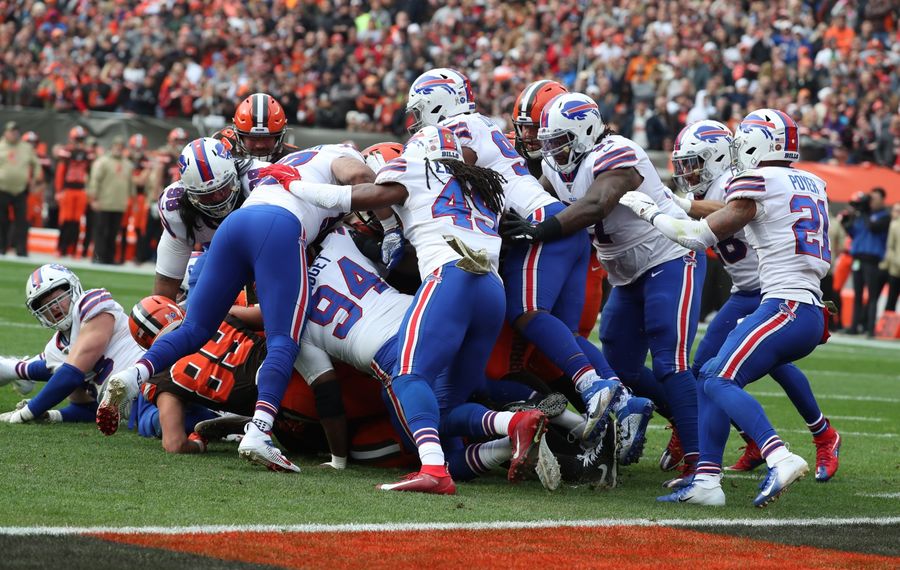 CLEVELAND – An epic goal-line stand will go down in history as a mere footnote in the Buffalo Bills’ 19-16 loss to the Cleveland Browns on Sunday at FirstEnergy Stadium.

The Bills’ defense stopped the Browns on six consecutive plays and eight snaps, including two penalties, from the 2-yard line or closer. Seven of those snaps were from the 1. In doing so, Cleveland became the first NFL team in 26 years to run six plays from an opponent’s 2-yard line or closer on a possession without scoring, according to ESPN, which cited the Elias Sports Bureau.

“I’ve been a part of some cool goal-line stands, some tough defenses, but I don’t think I’ve ever gone a full two series on the 2-yard line,” defensive end Trent Murphy said. “That was awesome. I’ll remember that forever. I would have liked the outcome today to be different, but that’s still a positive.”

The goal-line stand began with 6:20 to play in the first quarter, when Baker Mayfield threw incomplete for Odell Beckham Jr. on first-and-goal from the 1.

On the next play, Poyer and Matt Milano tackled Nick Chubb for a 1-yard loss.

On second-and-goal from the 2, Shaq Lawson stopped Chubb for a 1-yard gain.

On third-and-goal, Mayfield threw incomplete to Beckham, but Tre’Davious White was called for pass interference, giving the Browns a new set of downs.

Then Mayfield once again threw incomplete to Beckham, with White in coverage. Then Poyer stopped Chubb for no gain.

The Browns went for it on fourth-and-goal from the 1. Milano and Corey Liuget stopped Chubb in the backfield.

“I’ve been a part of some goal-line stands where you stop them,” linebacker Lorenzo Alexander said, “but to be able to do that that many times, obviously that was our opportunity to take the momentum back after they went down and scored on us (on the first possession of the game). To be able to stop them down there was huge for us and really put the game back in our hands.

“It was awesome to be a part of it. Obviously, in a loss it really doesn’t matter. But it was great just the way the guys fought down there. You’re going to have to earn every single yard every time you face us.”

The Bills took over on their own 3-yard line, and the offense promptly went three-and-out.

Browns coach Freddie Kitchens was resolute in defending the play-calling.

The Bills also had a second goal line stand, but of a much more typical variety, in the second quarter, when the Browns had first-and-goal at the 3 with 5:08 remaining until halftime.

Mayfield hit Jarvis Landry for a 2-yard gain, down to the 1.

On second down, Trent Murphy stuffed Chubb for a loss of two yards.

On third down, Mayfield threw incomplete for Chubb.

The Browns lined up to go for it on fourth down, before a false start on right tackle Chris Hubbard backed them up to the 8. Austin Seibert kicked a 27-yard field goal for a 9-7 lead.

“That just shows the type of guys we have, guys that have that fight in them, guys that don’t give up,” Edmunds said. “We stress it all the time, in the red zone, field goals and takeaways. I take my hat off to everybody out there, man. Everybody balled out.”

Bills' flawed blueprint: Defense carries too heavy of a burden