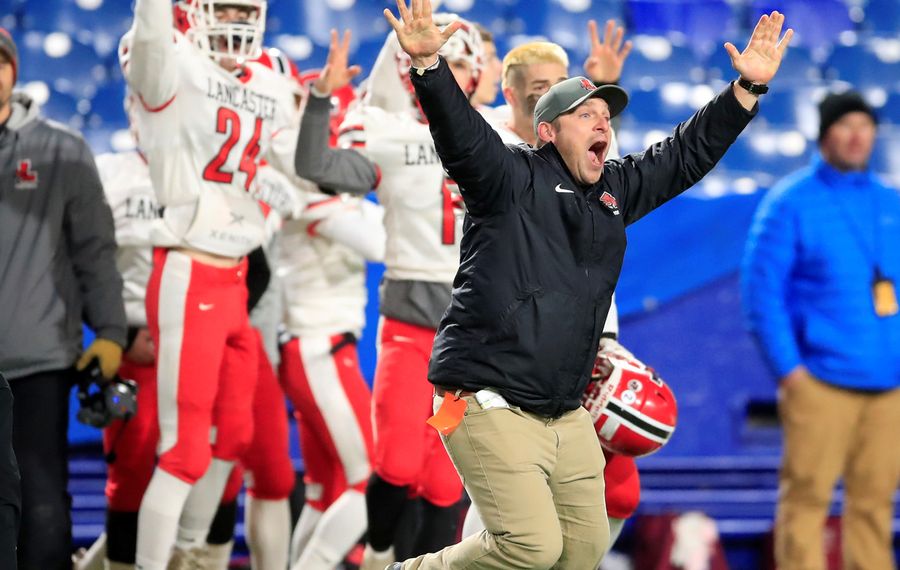 Shawn Davis went from being a potential goat to providing the spark that turned the Centennial season of Lancaster football into a championship one.

An estimated crowd of more than 2,000 watched Lancaster (8-2) overcome several gaffes, including four turnovers, to foil the championship dream of a Quakers program vying for its 15th sectional title but first since 2015 in the venue considered its second home.

Ethan Jurkowski’s strip sack and fumble recovery at OP’s 16-yard line set up the Legends’ game-winning touchdown – a 1-yard run by Cody Phillips with 51 seconds left. That takeaway happened with 3:23 left, seconds after Lancaster tied the game at 17-17 on Clark Whiteside’s 29-yard field goal – the team’s first field-goal attempt of the season.

Chris Shaver’s interception of an errant Jack Sharp pass with 40 seconds left secured another championship celebration at the home of the Buffalo Bills, a gala that felt especially sweet considering OP (8-2) had the Legends on the ropes until they fought their way out of trouble.

Lancaster advances to next Saturday’s state quarterfinal/Far West Regional contest against the Section V champion at 6:15 p.m. at SUNY Brockport.

“Relentless effort, that’s what we preach every day,” said quarterback Jason Mansell, who completed 11-of-20 passes for 129 yards and a touchdown. “The defense was flying around. The offense we were very slow to start, but we stuck in there. Man, I love these boys. We gave it everything we had, and it was enough tonight.

“This is special but we have work to do next week.”

Davis showed the resolve to keep battling and it helped get Lancaster off the mat. His 82-yard kick return touchdown midway through the third quarter came seconds after OP made it 10-0. That was the second time the Quakers turned a Davis special teams fumble into points. He muffed a punt early in the first quarter at Lancaster’s 14 that led to a 31-yard field goal by Tom Hollander.

But that was a distant memory as he raced through the middle and then down the left sideline for the touchdown that revived the Legends.

“He totally kick-started our offense,” Mansell said. “That kick return was huge for us. It got our momentum going. I told him ‘we need you. You’re a leader on this team.’ And he delivered.”

“It was definitely my teammates, they just helped me,” Davis said. “I was really down. I just knew I needed my shot. I saw the hole, my teammates made amazing blocks and I just took it. It was a great experience. I’m just happy with the outcome.”

Lancaster’s defense, which frustrated OP most of the night and limited the Quakers to 229 yards, then forced a punt. Legends quarterback Jason Mansell used his arm to give his team a 14-10 lead. He converted a third down with a 10-yard strike to Nick Castellana (five catches, 92 yards). The two hooked up on the next play for a 34-yard gain to get the Legends to OP’s 14. Two plays later, Mansell fired a strike to Dominic Fulciniti for the touchdown with 1:31 left in the third quarter.

Undaunted, OP marched down the field and seemed poised to go ahead, except a fumbled snap at Lancaster’s 10 on the first play of the fourth quarter was recovered by the Legends. The Quakers cashed in on their next possession, though, as Sharp scored from the 2 with 7:02 left . Hollander's PAT kick made it 17-14. That was Sharp's second short TD run. Sharp finished 19-for-33 with 177 yards and an interception.

The Legends responded by marching 53 yards in eight plays to tie things on Whiteside’s field goal. Mansell and Castellana hooked up on a 33-yard pass play to set up that score.

Then Jurkowski forced another turnover when it mattered most for Lancaster in a sectional final. Jurkowski, who had three interceptions in last year’s title-game win over Bennett, came in off a safety blitz, hit Sharp and dislodged the ball and then recovered it.

“That was an unbelievable play," fourth-year Lancaster coach Eric Rupp said. "Not too many people blitz the safety. We like it because the offensive line never accounts for safety in blitz protection. He hit that seam hard and made a great play on Jack.”

With only one time out left, OP was in trouble when Phillips (19 carries, 78 yards) gained 6 yards on a third-down play to give Lancaster a first-and-goal from the 5.

A muffed punt by Lancaster opened the door for the Quakers to draw first blood. Tristan Lancaster recovered the ball that slipped through the hands of Davis at the Legends’ 14.

But both defenses shined during a first half in which the teams combined for just 164 yards, with OP gaining only 75 despite forcing three turnovers. The Legends forced a turnover on downs inside the red zone in the second quarter.

OP’s Jacob Shul recovered a fumbled kickoff at Lancaster’s 34 to open the third quarter. Nine plays later, Sharp quick snapped and snuck it in from the 1 on fourth down for the game’s first touchdown. The extra point kick by Hollander made it 10-0 with 6:55 left in the third quarter.

Then the Legends picked up their game with Davis leading the charge to secure a championship to go with the 100-year milestone.

“You have to be mentally tough. … Shawn made an unbelievable play to get the momentum back in our favor," Rupp said. “It’s just unbelievable. (The championship) means so much for all the former players, coaches, their families and the community of Lancaster.