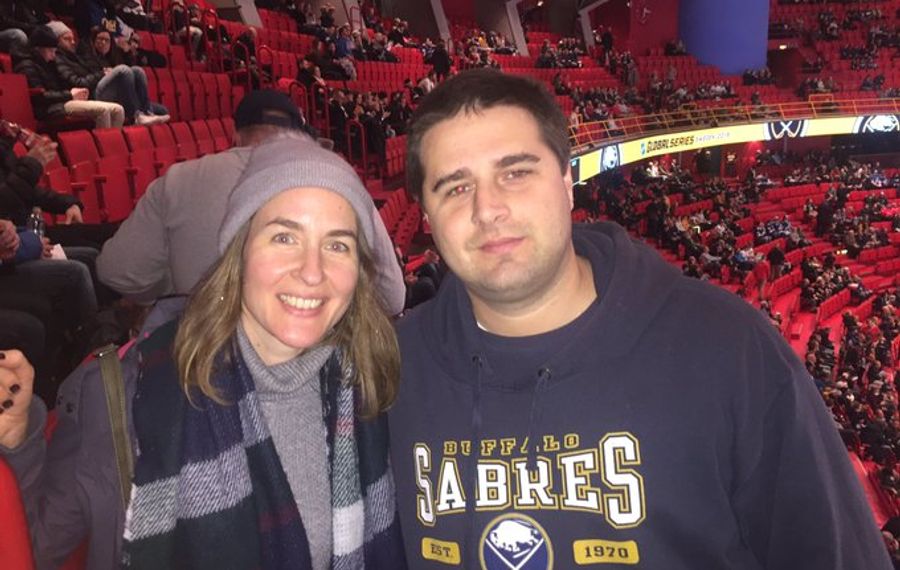 STOCKHOLM – There were probably a lot of unique stories in the crowd again Saturday as the Buffalo Sabres had the eyes of the hockey world upon them during their NHL Global Series game against Tampa Bay.

But up in Section B19 of Ericsson Globe, Nicolas Dantinne and girlfriend Jessica Miclotte from Namur, Belgium, had a good tale to tell.

It was Dantinne's first Sabres game since a one-game trip to Buffalo in 2011. How did he become a Sabres fan? He got hooked on television, during the 2008 game where Thomas Vanek scored a hat trick and the Sabres used a six-goal third-period to come back and beat the Lightning, 7-4, in Buffalo.

"I saw the Sabres' environment with Rick Jeanneret as a commentator. The energy was different than the other teams," Dantinne said. "The Thomas Vanek hat trick was amazing and got me to the Sabres and I've never left following them on MSG, WGR and The Buffalo News, of course."

Dantinne, who works in the digital printing industry, came to Stockholm on a 35th birthday gift from his girlfriend when his day came in April. He remembered his 2011 visit was a loss to Philadelphia with goals by Luke Adam and Jason Pominville.

"I stayed in love with the club because we visited the city," he said. "I love the games. I don't like any other commentator the way I like Rick Jeanneret."

Like plenty of Buffalo fans, Dantinne is fretting the Sabres' 8-1-1 start was a mirage.

"I'm a little bit more confident but I'm afraid we'll still be short for the playoffs," he said. "They make a good start and then the other teams discover the system. I hope I'm wrong for this year. If they make some moves before trade deadline for the playoffs. I hope that (GM Jason) Botterill will do something."

Is there another Buffalo trip in the offing?

"I told my girlfriend if they make the Stanley Cup, maybe the Eastern conference final I will think about it," he said. "I've already decided the next time I come will be for a playoff game. We already came to a regular season game."

Marcus Johansson could only laugh at the interference penalty he was nailed for in the second period of  Saturday's 5-3 loss when he collided with Tampa Bay's Mathieu Joseph in the offensive zone. Seven seconds later, Victor Hedman's power-play goal put Tampa Bay up for good, 2-1.

"I mean, I don't know what to do. I can't just disappear," Johansson said. "Honestly to me, they had been out there for almost two minutes. It felt like the guy kind of jumped into me. I don't know where to go."

"It seemed like the call went against us because their guy fell down. I don't know. It's obviously frustrating. You can't point the finger at that."

Rasmus Dahlin took an all-Sweden ceremonial faceoff for the Sabres against Hedman, with the puck being dropped by retired Detroit defenseman Niklas Kronwall.

"It was pretty cool, Kronwall there," said Dahlin. "I was a little bit scared because I've never done it before. In front of all this Swedish crowd too, it was pretty cool. This week has been really good. It's been as good as it could be."

Like the other Swedes in the games, Dahlin was thrilled to hear the sing-a-long that filled the air during the Swedish national anthem.

"The crowd was really good and it was fun to see all those Sabres fans out there. We didn't play well enough for them but it was cool that Sabres fans were here too."

The fierce rivalry in hockey circles between Sweden and Finland is well-known, so how did Buffalo's Finns feel about spending a week on the soil of the other country? It was no problem.

"I spend multiple weeks here every summer so it's almost like coming home to me," said Rasmus Ristolainen, who scored the Golden Goal for Finland to beat Sweden in the 2014 World Junior championship gold medal game. "I know the city really well because my trainer is from Stockholm. It's been good to be here with my team.

"The North Americans get to see what's it's like here, where we're all from. Finland is pretty similar, so our other teammates are getting a good taste of how we grew up. They see our background a little bit and it's great.

Fellow Finn Henri Jokiharju had parents and maternal grandparents in the crowd.

"Having my family here is unbelievable," Jokiharju said. "I never thought my grandparents would be able to see me play in the NHL but I'm very happy about that.

"The Swedes on our team are all really nice guys. A lot of times, Europeans understand other Europeans a little bit better. It's nice having lots of European guys on our team."

Ristolainen said he's been very impressed with how Jokiharju has fit into the Buffalo lineup since being acquired from Chicago over the summer.

"Before this season, here's someone I had never seen play and didn't know. I had barely heard the name," Ristolainen said. "He was in the minors a lot. He's played really good hockey and earned his spot with the team."