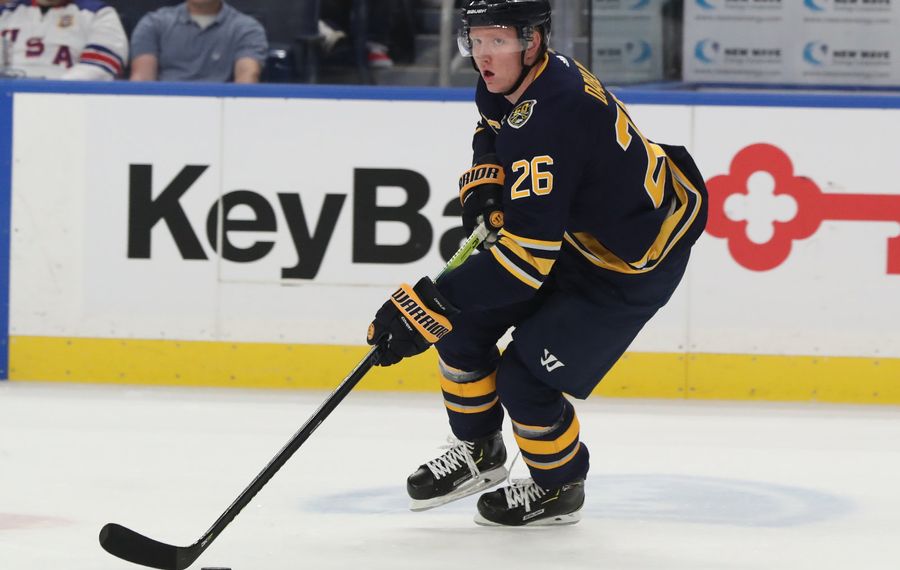 The NHL in Sweden: With another two-game series at hand between the Sabres and Lightning, Stockholm will be playing host to its 11th and 12th regular-season NHL games this weekend, the most among all overseas locales. All Stockholm games have been played at Ericsson Globe. Following Stockholm are Helsinki, Finland (7 games); Prague, Czech Republic (5); and Tokyo, Japan (4).

Gothenburg is the only other Swedish city to stage an NHL game, when New Jersey beat Edmonton, 5-2, in last year's season opener. Current Sabres center Marcus Johansson played for the Devils in that game.

International experience: It's the second time for each team overseas. The Sabres went 2-0 in 2011, beating Anaheim in Helsinki (4-1) and Los Angeles in Berlin (4-2). The Lightning opened their 2008-09 season by dropping a pair of 2-1 games to the New York Rangers in Prague in the NHL debut of No. 1 pick Steven Stamkos.

The Sabres and Lightning went together to Austria on a preseason tour in 1998, each beating an Austrian club team before Buffalo dropped Tampa Bay, 3-1, in a head-to-head matchup.

"We're in Sweden, good place for him to kick off our weekend," a smiling coach Ralph Krueger said of Ullmark after today's morning skate. "Nothing complex there."

The Buffalo lineup: Victor Olofsson is back on the top line with Jack Eichel and the healthy scratches today will be Evan Rodrigues, John Gilmour and Lawrence Pilut. Rasmus Dahlin's first game in Sweden will be spent partnering with Henri Jokiharju.

Buffalo's Super Swede: The Sabres’ all-time leader for career appearances and points by a Swedish-born player is Stockholm native Henrik Tallinder, who tallied 22-94-116 in 532 games with the team in two stints with the team that totaled nine seasons from 2001-14.

The Sabres have six Swedes on their roster in Ullmark, Dahlin, Olofsson, Pilut, Marcus Johansson and Johan Larsson.

For Sabres fans from home and around the world, Rasmus Dahlin is in the spotlight

Long break: Did you forget that the Sabres head into today's opener of the NHL Global Series on a three-game losing streak? It's pretty easy to because they haven't played in six days, but Buffalo is 0-2-1 in its last three, losing to Arizona (3-2 shootout), Washington (6-2) and the New York Islanders (1-0).

Find the offense: The Sabres have scored two goals or less for five straight games and are 1-3-1 in them. Krueger liked the net-front pressure his team had against the Islanders despite being shut out.

"One of the areas of growth here is the understanding of how you can get control of the offensive slot and the sacrifice that needs to happen," Krueger said. "Defensively we've learned to grow in a lot of ways but offensively that is a piece we continue to work on."

Back-to-backs: Something will give today because the Sabres are 0-3 in the first game of back-to-backs this season this season (losing to Anaheim, the New York Rangers and Washington) while Tampa Bay is 0-2 (Florida and the Rangers).

Home-ice advantage: Today counts as a Sabres home game, meaning Buffalo will have the last line change. This will be the second time in three years the Sabres will play only 40 home games in KeyBank Center instead of 41. They also did it in 2017-18, when their Winter Classic game in New York against the Rangers at Citi Field was a home game.

Buffalo is 1-3-3 in its other seven home games not held downtown, with the lone win in 2011 against Anaheim in Helsinki, Finland, during its only other overseas appearance. In addition to the games in Queens and Finland, the Sabres twice played home games in Rochester (tying New Jersey in 2003 and losing to Washington in 2005), had neutral-site losses in 1993 against Vancouver (in Hamilton) and Pittsburgh (in Sacramento), and suffered a shootout loss in 2008 to Pittsburgh at the Winter Classic in Orchard Park.