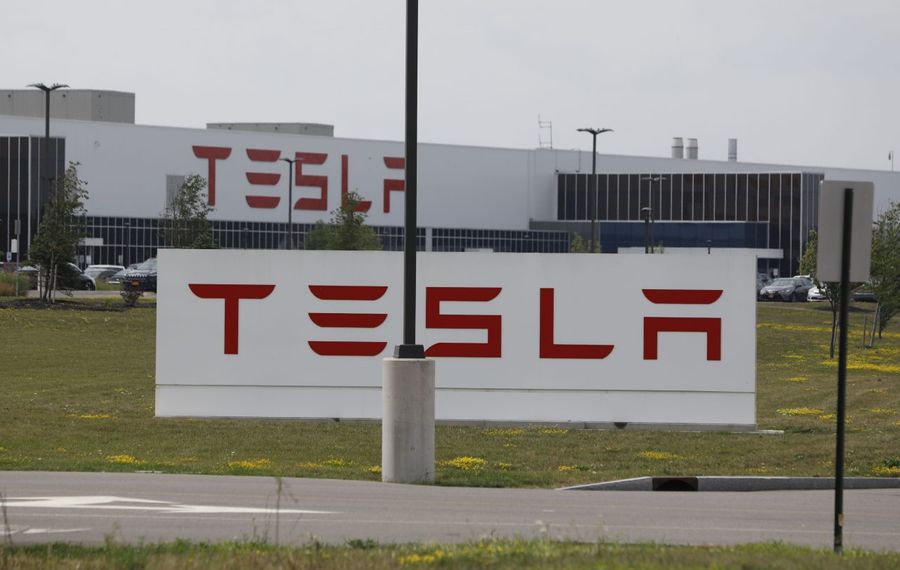 Now, auditors are saying the building and all that equipment is worth just under $75 million – or just 8% of what the state put into the RiverBend factory.

That stunning admission, included in financial statements from the nonprofit entity that owns the plant, is a recognition that the massive plant that the state custom-built for Tesla would have far less value to anyone else, should the electric vehicle maker's solar energy business move out of the South Park Avenue facility.

It's a lot like what happens when you buy a new car. As soon as you drive off the dealer's lot, the car loses value because it isn't new anymore. Only a new car loses value slowly, over a long period of time. The huge write-down is an assessment by Fort Schuyler Management Corp. auditors and executives that the massive building and the highly specialized equipment purchased by the state would have far less value to anyone but Tesla.

"What they are acknowledging is that it has very little value," said E.J. McMahon, the research director at the Empire Center for Public Policy, a conservative Albany think tank that has been critical of the RiverBend project.

What the write-down doesn't reflect is the economic value of the solar panel factory's operations – and state officials warned against interpreting the write-down as an indication that the RiverBend factory's value has dropped by more than would be normal for a three-year-old factory. The size of write-down also reflects that Fort Schuyler receives only $1 a year in rent from Tesla, they said.

"The value to Fort Schuyler is what we're looking at here, not the value to Tesla or to New York State," said a Fort Schuyler official, who said the valuation is "somewhat subjective" and was arrived at after considerable discussions with its auditors.

"What would happen if the facility and the equipment go back on the market would be entirely different," he said.

Tesla and its partner, Panasonic, have around 800 people working at the factory, with an April 2020 deadline looming for employment to reach 1,460 people or else Tesla could be hit with a $41.2 million penalty by the state. Tesla is counting on its solar roofing product to become a hit with consumers, allowing the company to quickly increase production in Buffalo and meet its hiring goals.

"The real value is sitting on Tesla's books and it goes to the value of what they produce and the jobs that they produce," said an Empire State Development official. "This only represents the value of it to Fort Schuyler's books. The value of this to the taxpayers of New York does not change because of this transaction."

Tesla CEO Elon Musk last month said he expected solar roof production in Buffalo to scale up in the coming months – a promise Musk has made several times over the last two years without it actually happening. The company unveiled the third version of its solar roof last month.

"We'll definitely make New York proud about that factory. It's going to be great," Musk said.

But even if it does, the impact of the Tesla plant will be far less than what state officials initially promised. In a series of contract revisions, the state dropped the provision included in earlier agreements that mandated the creation of another 1,440 jobs at suppliers and service providers, effectively cutting the job impact from the state's $959 million investment in half. Hopes that the project would spur the creation of a solar energy research hub in Buffalo and Rochester also failed to pan out.

To try to meet its job targets, Tesla is making electronic components for its electric vehicle Superchargers and inverters for some of its battery products. Tesla executives say they are creating a "center for excellence" for power electronics in Buffalo. That's not the same as the solar energy hub that state officials were promising.

The agreement also failed to set any type of pay standards for the RiverBend jobs. For nearly $1 billion in taxpayer subsidies, it certainly would have been reasonable for the state to insist that the factory's jobs pay well – maybe mandating that 80% of the positions pay at least 33% above the area's median wage, or around $59,000. Instead, Tesla's entry level wage is around $16 an hour, or around $33,000 a year.

The company did not respond when asked to comment.

Tesla's subsidies, if it meets its mandate to employ 1,460 people, amount to $657,000 per job in Buffalo. Tesla's commitment, however, is broader than just Buffalo. The company has agreed to spend $5 billion on capital and operating expenses and bring 5,000 jobs to the state during the 10-year period.

For that, the state spent $660 million to buy 88 acres of land at RiverBend, do the environmental cleanup of the former Republic Steel plant site and build a 1-million-square-foot factory for Tesla. The state also spent $299 million to buy specialized equipment for the factory.

The write-down also is a direct repudiation of the strategy pushed by Alain Kaloyeros, the founding president of the SUNY Polytechnic Institute, now in prison after being convicted in a bid-rigging scheme to award the contract for building the plant to Buffalo contractor LPCiminelli.

Kaloyeros' argument at the time the Buffalo solar panel plant was first unveiled by the state on a much smaller scale in 2013, was that having the state own the factory and buy much of the equipment that went inside it was a way to protect the state's massive investment of taxpayer money.

That strategy – embraced by Gov. Andrew M. Cuomo in the first phase of the Buffalo Billion – also was used at other high-profile projects in the initiative, including the IBM technology hub and the Albany Molecular Research project in the Conventus Building.

If the solar panel factory, first under Silevo, then SolarCity and now Tesla, went belly up, the argument went, the state would be able to recoup its investment because it could simply find another business to move into the state-of-the-art facility. Tesla pays $1 a year in rent for the Buffalo gigafactory under its 10-year lease, with an option to extend the $1-a-year rate for another 10 years.

The massive write-down by Fort Schuyler, first reported by The Wall Street Journal, shows that the entity's auditors disagree.

Given "the limited direct financial consideration to be provided to the corporation by Tesla over the initial lease term and potential renewal period, and the estimated useful life of the facility and associated equipment, the corporation determined it will not likely receive the direct financial benefits associated with ownership of the manufacturing facility and equipment," the financial statements said.

"The whole premise was mind-blowingly flawed from the beginning," McMahon, of the Empire Center for Public Policy, said.

"What is the asset worth? Ultimately not what we put into it," he said. "What they are acknowledging is that it has very little value."

And that means the safety net that taxpayers were promised has a $900 million hole in it.