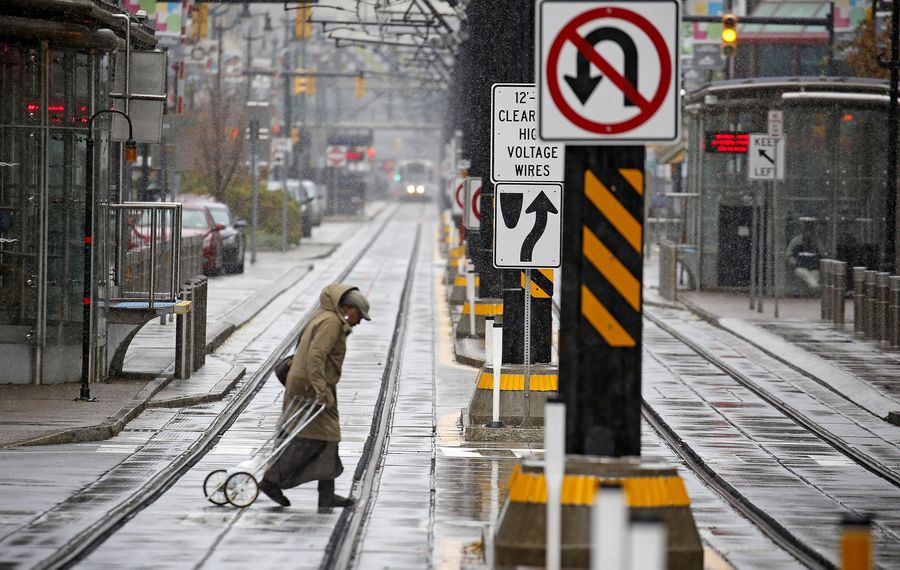 When it comes to Buffalo, the decision-makers at NBC’s “Today” are a little flaky.

For the second straight morning, NBC’s Ron Mott was in downtown Buffalo discussing the national weather picture and exaggerating its impact here. And his report came at the end of a week in which a different national media outlet described a fairly typical fall day in Western New York as akin to the weather in Santa's hometown.

I don’t fault Mott; he doesn’t decide where he goes. But his Friday morning report was clearly piling on the baloney as high as the snow was falling elsewhere across the country.

“He seemed equally as dumbfounded as to why the decision-makers sent him here,” wrote Hammer. “He was cool. I invited him to Hamburg in mid-December, a time and place where a live shot can turn to gold.”

But there was Mott again Friday at either Niagara or Lafayette Square (I couldn’t tell) after “Today” co-anchor Hoda Kotb introduced him “as braving the cold in Buffalo, N.Y.”

“What a difference a day makes,” said Mott.

I was thinking the exact opposite. He seemed to be trying to tell the same story here for the second straight day that didn’t make sense considering the weather conditions.

“It is about 8-10 degrees colder than it was yesterday,” Mott said of the difference between Thursday and Friday. A graphic had the temperature at 28 degrees.

“We certainly had a fair amount of snowfall on Buffalo during the day,” added Mott. “It was just a little too warm for it to stick so after people went to bed last night it got well below freezing. Now they are waking up to a Friday morning surprise.”

I was surprised all right – surprised that NBC would be this silly again. I live about a mile away from where Mott was speaking, looked outside and saw a dusting of snow.

Why would the “Today” decision-makers keep Mott here rather than send him to the Midwest where the story really was? Does the show have a budget problem?

Or could it be that Buffalo's weather reputation is sometimes a bit exaggerated outside of Western New York? Some residents can be a little sensitive when it comes to exaggerating the weather here. Some are not yet over Fox play-by-play man Chris Myers’ claim during the Buffalo Bills’ 24-9 victory over Washington Sunday that “it (was) as cold as the North Pole here.”

At least it actually was cold Friday for Mott's report, which included him narrating footage of snow in Pennsylvania, Iowa, Michigan and Wisconsin before coming back to the "situation" in Buffalo.

“In Buffalo, a frigid rescue in the Niagara River,” said Mott as footage of the rescue that was unrelated to the snow story – and also was not in Buffalo – was played. “Lake-effect blizzards are routine here. Flakes fell, but spirits remained high.”

Then he had a quick interview with two women in downtown Buffalo and asked, “This isn’t Buffalo’s best snow?”

“No,” they said together.

About 10 minutes later, Hammer was on during a weather cut-in for “Today.”

“We are in the beginning of a 1-2 punch of cold air,” he explained.

That wouldn’t hurt as much as the 1-2 punch of “Today” snow silliness.

Then Hammer defined what Mott called a “fair amount of snow” overnight.

He said we had “about a half-inch of snow overnight.”

“It is a nice-looking day,” added Hammer. “Just a little on the cold side.”

Maybe Mott should take Hammer’s advice and come back in December when there might actually be a weather story here worth covering.