STOCKHOLM – They sat 14 strong in Section A15, Row 11 of the Ericsson Globe. A few hours before the Buffalo Sabres played a game in Sweden for the first time in their history, the members of the Sabres CZ-SK Fan Club (that's Czech-Slovak) were in Austria, taking a flight here from Vienna.

You didn't know there was such as thing as the Czech-Slovak Fan club? Me either.

They arrived in plenty of time for the 8 p.m. local time faceoff, even got some pictures taken with the team at the Grand Hotel before the players boarded the buses to the arena. Once at the game, they came with full throats and full regalia and were a big part of a very different atmosphere for an NHL contest.

Many had painted their hair in the red, white and blue colors of the Czech Republic. The leader, 23-year-old university student Viktor Maudr from Prague, carried a drum that he banged on to lead the cheers while wearing his 50th anniversary Victor Olofsson jersey.

"We have so much passion for the Buffalo Sabres and it is a dream to be here to see them," Maudr said, talking rapidly but in English clear enough to be deciphered through his accent. "A dream come true."

Many of the group are Sabres fans because of Dominik Hasek, the greatest player to come from the Czech Republic. Many have liked the jerseys over the years or have joined on with their friends.

There were Eichel jerseys. Dahlin. LaFontaine. Olofsson. Briere. In all sorts of colors. In the slug, the goathead and the traditional navy and whites.

"I love Olofsson," Maudr said. "I interviewed him a few years ago when I met him with the fan club while he was playing for Frolunda (in the Swedish elite league). I love his shot. It's from a different world."

Vaclav Stach, 33, was the one with the Daniel Briere jersey. And it was the red crossed swords alternate, circa 2003.

"He was my favorite player and the red Sabres jersey I really really like," said Stach, a Hewlett Packard product manager from Ostrava.

The group chanted "Let's Go, Sabres" and "Let's Go, Buffalo" in the concourse before the game. Maudr pounded his drum throughout. There were pockets of fans like that all through the arena rooting for both the Sabres and the Tampa Bay Lightning.

There was a buzz to the crowd you don't normally get in November.

"It was great. It had that European feel to it," said Sabres winger Sam Reinhart, who scored both goals in Buffalo's 3-2 loss.

The fans screamed for both sides when the players took the ice for warmups. Most arenas are empty during pregame drills. The Swedish national anthem was stirring, with most of the crowd singing along loudly. You find parts of the lyrics in English online and they're totally appropriate for what everyone in the Buffalo traveling party has seen here this week

I greet thee, most beautiful land upon earth,
Thy sun, Thy sky, Thy meadows green.

With God I shall fight for home and for hearth,
for Sweden, the beloved native soil.

I trade thee not, for anything in a world
No, I want to live, I want to die in the North

"The start overall and standing there during the anthem was big for me, " said Sabres goaltender Linus Ullmark, one of five Swedes who played in the game for the Sabres. "It was a very humbling experience. It was one of those one-of-a-kind moments I'll always cherish for the rest of my life."

"That was probably one of the most special things I've experienced at a hockey game," said Tampa Bay defenseman Victor Hedman, a national hero who is the Lightning's lone Swede. "Hearing my national anthem before an NHL game. That was super-special. I was focusing on that flag and trying to keep my emotions in check."

As the players said, the Swedish anthem rates as the seminal moment of Friday’s activities. Wonderfully done. #Sabres #NHLGlobalSeries pic.twitter.com/bCAE3EpB0v

The anthems over, it was time to play hockey. Which was what everyone had come for, whether they were from The 716, from Florida, from parts elsewhere in the U.S. or from around the world.

That's the lure of these Global Series games.

"It's like a dream, a dream," said Stach. "We are fans for 10-15 years. Under Viktor's great work, we are able to be here to see our stars. Not all because of Hasek but several points but Dominik Hasek was the biggest one."

"We have drums and we have crazy hair," Maudr said. "The City of Good Neighbors is in Buffalo. I have never been in Buffalo. Fourteen of us are here to see the Sabres for one dream and I have another dream to see them in Buffalo one day."

What were some of Maudr's thoughts after the game?

"I think the anthem was great but not as big for us. We are from Czech and Sweden anthem wasn't so much for us," he wrote via Twitter direct message. "Maybe the American anthem was bigger. You gear up every night at 1 am to watch the game on TV. Eighty-two games and most of them are at 1 am. You watch it, listen to (KeyBank Center anthem soloist) Doug Allen singing. And now it really happened. Not with Dougie but still it was big moment.

"I think the best part was 2nd goal (by Reinhart in the third period). We saw it exactly in front of our eyes. There was no referee obstruction. Pure love. But the win tomorrow would be something else." 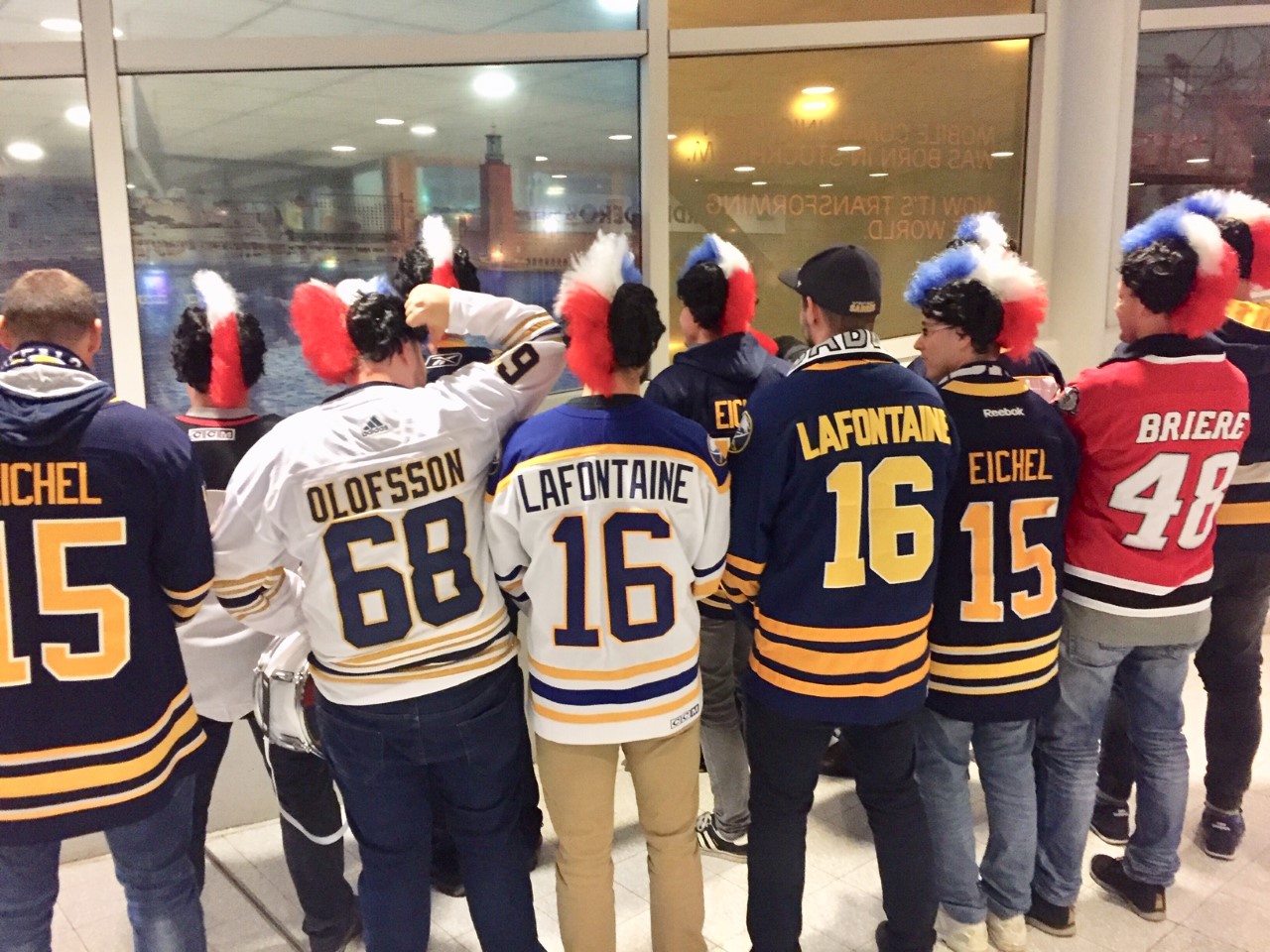 The Czech/Slovak Fan Club did a 180 to show off the backs of their Sabres jerseys. (Mike Harrington/Buffalo News).