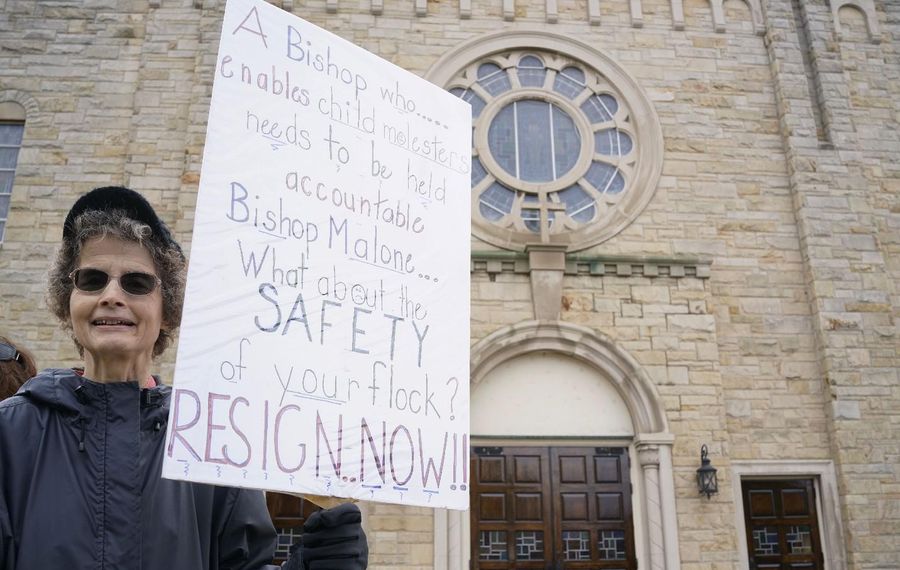 The Catholic Diocese of Buffalo needs new leadership and this newspaper’s editorial board has been among the voices calling for Bishop Richard J. Malone to resign.

We also are firm defenders of the First Amendment, which includes “the right of the people peaceably to assemble” and express themselves through protest.

When protesters target people’s homes, however, that approaches a line that should rarely be crossed. The right to free speech doesn’t require its practitioners to throw good judgment out the window.

Malone’s residence is one of the locations where a small band of picketers has been showing up to publicly express displeasure with the bishop’s handling of the church’s sex abuse scandal.

The picketers describe it as a prayerful protest, which is a perfectly respectable activity. They have demonstrated at the diocese chancery offices, Christ the King Seminary and at Masses where Malone was present.

A church is, in effect, a workplace for the head of Buffalo’s Catholic Diocese, so peaceful picketing there has its place, so long as it does not disrupt the rites of Mass or the ability of the congregants to worship.

Protesting outside Malone’s home, however, feels like bullying and intimidation, even if the demonstrators are just carrying signs or saying the rosary as they walk past.

Taking protests to people’s homes has become too common a tactic in society at large. About one year ago, members of a group called Smash Racism DC assembled in front of the home of Fox News commentator Tucker Carlson, knocking on his door and chanting, “We know where you sleep at night.” Carlson was not home, but his wife locked herself in the pantry and called 911. Whether or not you align yourself with Carlson’s politics, those tactics are closer to menacing than to free expression.

Uber drivers are planning to protest on Nov. 6 outside the homes of some of the company’s billionaire investors in California. Picketers chanted outside the Kentucky home of Senate Majority Leader Mitch McConnell in August.

In Buffalo, developer and politician Carl Paladino organized a demonstration outside the home of Anthony Gioia in 2015 because Gioia, a longtime Republican donor and former U.S. ambassador to Malta, had organized a fundraiser for Rep. Brian Higgins, a Buffalo Democrat. Protesters seeking Paladino’s removal from the Buffalo School Board picketed outside his house in 2017. A few years earlier, the Buffalo Teachers Federation organized a protest outside the home of Robert Bennett, then a member of the Board of Regents.

There is a difference, of course, between marching with a few picket signs and using menacing tactics at the home of a protest target. Still, norms of fairness and common decency should be preserved, and boundaries maintained. Weaponizing our disagreements about political, social or religious issues creates a dangerous climate where everyone becomes fair game. There is also the potential for collateral damage to a protest target’s family members, neighbors or other bystanders.

Malone deserves some credit for the diocese’s decision to sell the Tudor mansion on Oakland Place that had been home to Buffalo’s Catholic bishops since 1952. Proceeds from the sale are being used to compensate sexual abuse victims. Malone now lives in a former convent house on the grounds of St. Stanislaus Parish, on Townsend Street, in the Broadway-Fillmore neighborhood.

Unhappy Catholics in the Buffalo Diocese have been voting with their feet and their wallets, with attendance and financial donations dropping since the sex abuse scandal flared up in the past couple of years. There are plenty of ways to register complaints about a person’s job performance without making them feel menaced in their homes.