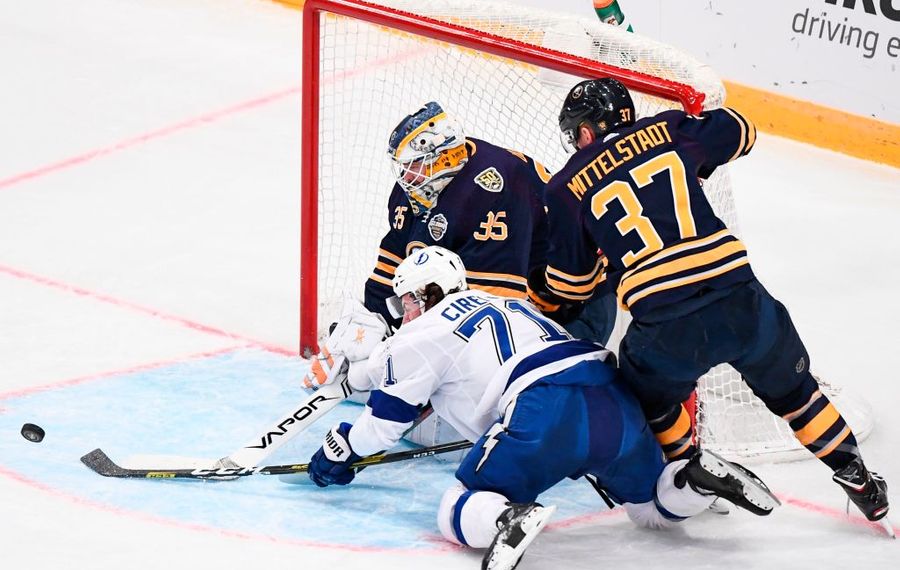 STOCKHOLM – Sam Reinhart scored twice, nobody else did.

The Buffalo Sabres' offensive struggles continued Friday on the other side of the Atlantic during a 3-2 loss to the Tampa Bay Lightning before a sellout crowd of 13,230 in Ericsson Globe.

The Sabres (9-5-2) lost their fourth straight, fell to 1-4-1 in their last six games – and have not scored more than two goals in any of them. They are 0-3-1 in the last four games. The Lightning snapped a two-game skid.

Tampa Bay (7-5-2) had a 2-0 lead after one before Reinhart scored late in the second. Yanni Gourde's goal at 7:45 of the third put the Lightning up, 3-1, before Reinhart got Buffalo close again.

Sobotka KO'd: The Sabres lost winger Vladimir Sobotka late in the first period to a right leg injury after he took a hip check from Nikita Kucherov just inside the Tampa Bay blueline.

Sabres coach Ralph Krueger was furious with the no-call on the hit, which was low and clearly late after Sobotka had delivered the puck. Hot mics at ice level caught an incredulous Krueger telling referee Chris Lee, "you've got eight eyes," in a reference to four officials on the ice and none thinking the play was worthy of a penalty.

"I can't control the decisions that are being made," Krueger said. "They needed to make one and obviously their decision was that it was a fair hit. That was their decision and we need to move on whether we like it or not. Everybody can look at that video and make their own decision on it."

Krueger said Sobotka will not play in Saturday's rematch and will be evaluated Monday in Buffalo but noted "I shouldn't say any more." The injury is believed to be a long-term one.

"I didn't see it honestly. It kind of happened behind me," said Sobotka linemate Jeff Skinner. "I looked around and he was on the ice. You never like to see a guy get injured like that. I'm sure the right people will look at it and make decisions."

Late AND low. Quite a baffling no-call. https://t.co/wcoyY1H3z5

The first Buffalo goal: The Sabres were in a 2-0 hole and doing virtually nothing late in the second period when some terrific hand-eye coordination from Reinhart cut their deficit in half.

Reinhart deftly used a midair deflection of a Rasmus Ristolainen shot to get a puck past Andrei Vasilevskiy and cut the Buffalo deficit in half at 15:43 of the period. It was initially ruled no goal but an overrule after instant replay allowed the Sabres to get back in the game.

It was Buffalo's first goal in 125 minutes, 3 seconds over its last three games.

"We played the way we wanted to. It was just a couple instances where our tempo slowed down and we were a little disconnected," Reinhart said. "That let to their opportunities. When we were connected and supporting each other, we created chances for ourselves."

Now that I see a clear replay, that was a rough no-goal call there. Good reversal by the war room. Not a good job on the ice. https://t.co/V0GevLs9JA

Reinhart's second goal: It came at 11:30 of the third on a quick snapshot from the left circle. Henri Jokiharju and Victor Olofsson, one of five Swedes in the game for the Sabres, got the assist.

First period: The Sabres fell into a 2-0 hole through 20 minutes as Tampa Bay got goals from Kucherov at 3:19 and Alex Killorn at 16:14. Kucherov converted a Brayden Point pass on a 2-on-1 with Jake McCabe caught trailing the play from behind while Killorn tipped in a Victor Hedman shot during a power play with Rasmus Dahlin in the penalty box for interference.

In the net: Linus Ullmark stopped 31 of 34 shots for the Sabres. Andrei Vasilevskiy stopped 20 of 22 for Tampa Bay -- and improved to 9-1-1 in his career against Buffalo.

Back-to-backs: The Sabres are now 0-4 in the first game of back-to-backs this season this season (also losing to Anaheim, the New York Rangers and Washington) while Tampa Bay is 1-2 (losing to Florida and the Rangers).

International experience: It's the second time for each team overseas in the regular season. The Sabres went 2-0 in 2011, beating Anaheim in Helsinki (4-1) and Los Angeles in Berlin (4-2). The Lightning opened their 2008-09 campaign by dropping a pair of 2-1 games to the New York Rangers in Prague in the NHL debut of No. 1 pick Steven Stamkos.

The Sabres and Lightning went together to Austria on a preseason tour in 1998, each beating an Austrian club team before Buffalo dropped Tampa Bay, 3-1, in a head-to-head matchup.

Home far away: Friday's game counted as a Sabres home game, meaning Buffalo will play only 40 home games in KeyBank Center instead of 41 for the second time in three years. They also did it in 2017-18, when their Winter Classic game in New York against the Rangers at Citi Field was a home game. Buffalo was 1-3-3 in its other seven home games not held downtown, with the lone win being the 2011 game against Anaheim in Helsinki.

In addition to the games in Queens and Finland, the Sabres twice played home games in Rochester (tying New Jersey in 2003 and losing to Washington in 2005), had neutral-site "home" losses in 1993 against Vancouver (in Hamilton) and Pittsburgh (in Sacramento), and suffered a shootout loss in 2008 to Pittsburgh at the Winter Classic in Orchard Park.

Swede power: Who's the Sabres' all-time leader for career appearances and points by a Swedish-born player? It's Stockholm native Henrik Tallinder, who tallied 22-94-116 in 532 games with the team in two stints that totaled nine seasons from 2001-14.

"From our perspective we get another shot at them," Reinhart said. "We get to play two games and we have to salvage the trip a little bit."

The game will be televised on MSG and WGR Radio, with Rick Jeanneret and Rob Ray doing the play-by-play from KeyBank Center. They did Friday's game on the radio from (716) Food & Sport while NBC Sports Network did its television broadcast from the studio in Stamford, Conn.