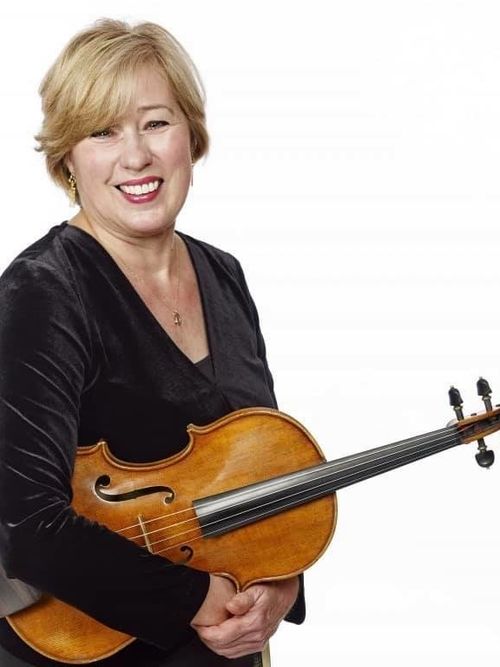 Where Valerie L. Heywood sat in the viola section, there was an empty chair at last Saturday’s Buffalo Philharmonic Orchestra concert in Kleinhans Music Hall. On its seat – a bouquet of flowers.

There was a moment of silence, then the orchestra played a number not on the program – Bach’s “Air on the G String” – in her memory.

Violist with the Buffalo Philharmonic Orchestra for nearly 35 years, Ms. Heywood died unexpectedly Oct. 31 in her Williamsville home. She was 67.

Her last performance with the BPO was at a youth concert the day before her death.

Born in Detroit, she was inspired to play viola when she heard a radio broadcast of Mozart’s Sinfonia Concertante, which features a stunning duet between violin and viola, according to her BPO biography. She studied with members of the Detroit Symphony Orchestra, including principal violist Nathan Gordon.

Remaining in New York, she toured and recorded with the Orpheus Chamber Orchestra, Barge Music, the Con Brio Ensemble, the Virtuosi Ensemble, New York City Opera and the American Symphony.

As a studio musician, she played on many movie soundtracks and recorded with Cher, Marcus Miller and Emerson, Lake and Palmer. She was featured in a BBC television broadcast, “Artists in New York.”

In the late 1970s, she was a member of the Chic Strings, touring with the disco band Chic and appearing on their albums, “Risqué” and “Real People.” She also played with the Chic Strings on Diana Ross’ hit 1980 album, “Diana.”

A highlight of her work with the BPO was a performance of Sinfonia Concertante in 2016 with the orchestra’s newly appointed concertmaster, Dennis Kim.

She was a founding member of the Chamber Music on Elmwood Festival and performed with the Ars Nova Musicians Chamber Orchestra locally.

She also performed annually at the Grand Teton Music Festival in Jackson, Wyo., and for 16 years with the Santa Fe Opera in New Mexico, driving there and back over several days with her dog.

She taught privately, at Bravo music camps and as a faculty member for 20 years at SUNY Fredonia and SUNY Buffalo State.

WNED-FM program host Peter Hall, writing about last Saturday’s concert in Buffalo Rising, said, “I always found (her) to be one of those souls you meet occasionally who just loved people, life, the world to explore, and, of course, music.”

Her Chic Strings collaborator Karen Milne wrote on Facebook, “She was a joy to have in the band, a great person and a terrific musician.”

Another friend likened her to “opening a bottle of champagne.”

An animal lover, her household included two cats, a rescue dog and an adopted greyhound.

Surviving are her husband, Ronald W. Daniels, retired principal bassoonist with the BPO; two stepdaughters, Laurie Van Wagenen and Tamara A. Wolff; a stepson, Gregory A. Daniels; and three stepgrandchildren.